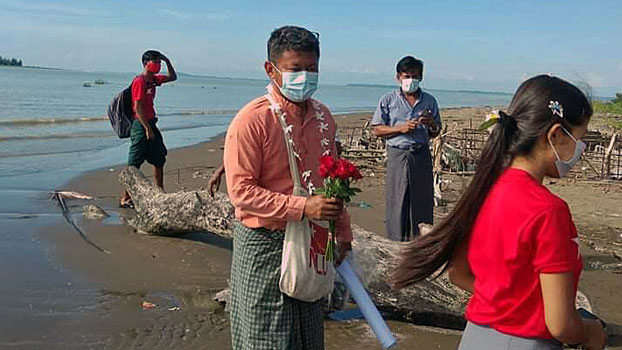 An unidentified armed group abducted three candidates from Myanmar’s ruling party as they campaigned in rural areas of southern Rakhine state on Wednesday, spiriting the men away in a speedboat and cursing them as traitors, witnesses and a party official said.

The abductions took place little more than three weeks before elections in Rakhine’s Taungup township, far south of the theater of war between the Myanmar military and the Arakan Army (AA) that erupted in late 2018 and has killed nearly 300 civilians in the northern part of the coastal state.

The three abducted politicians are Ni Ni May Myint, 31, who is seeking reelection to the lower house of parliament; Chit Chit Saw, 32, running for a seat in the upper house, and Min Aung, 48, a state parliamentarian seeking reelection, said Tun Kyi, vice chairman of the National League for Democracy (NLD) in Taungup township.

“It happened on Phaung Khar Island, an alluvial island,” he told RFA's Myanmar Service. “Our candidates were there campaigning. While they were having a meal, a group of unknown men surrounded the house [and] seized their mobile phones and abducted them.”

Tun Kyi said he reported the incident to local police, while local witnesses recalled that a group of seven armed men in plainclothes took the politicians away on a speedboat.

Some witnesses said they believed the men to be members of the AA, though the  rebel force is not known to be active in the Taungup area or in other southern townships in their fight for more autonomy for ethnic Rakhine Buddhists in the state.

Kyaw Min Than, the administrator of Paung Khar village, said the men took the NLD candidates by boat to an area west of the village after abducting them at about 10:45 p.m.

“We don’t know the reason they took them,” he said. “They took them by motorboat along the Kaladan River west of the village, but we don’t know who they are. They were armed and were wearing regular plainclothes.”

“We have never had armed conflicts with AA troops in this area,” he added.

NLD supporter Thant Zin Pyo, who was also abducted with the candidates but later escaped, said the men had short hair and wore soccer jerseys and short pants.

The abductors also spoke in a Kyaukphyu regional dialect and verbally abused them, calling them “traitors” and “backstabbers,” Thant Zin Pyo said.

“They were pretty chaotic and violent,” he said. “They asked us to take off our T-shirts with NLD party logos on them. They said they hated seeing these party shirts. I can assure you that they were not from the [government] military.”

“We all assume that they are from AA,” he said, adding that the men asked the four if they had pure ethnic Rakhine blood.

The NLD remains popular in much of the country, but the devastating war in northern Rakhine has bred resentment in that state.

Hein Lin Htike, cousin of Ni Ni May Myint, said he saw a Facebook post about the three candidates’ arrival in Phaung Khar.

“But afterwards, we lost contact with them,” he told RFA. “Later, someone from Phaung Khar contacted us to inform us about the abductions.”

Min Aung told RFA in May that unknown assailants posing as policemen had gone to the homes of NLD party members and tried to kidnap them.

Rakhine state government spokesman and municipal minister Win Myint and  border affairs and security minister Colonel Min Than were not available for comment.

But Min Than told a local media outlet earlier in the day that AA troops were responsible for abducting the three NLD candidates. 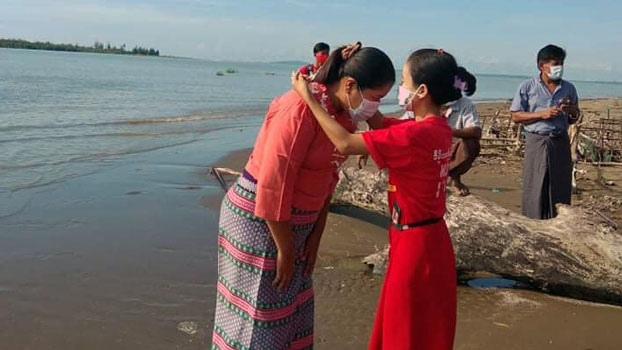 AA spokesman Khine Thukha told RFA that he had not received any information about the incident.

NLD spokesman Myo Nyunt said it is unacceptable for anyone to intimidate candidates with arms and abduct them during the election campaign period.

He recalled that Ye Thein, the former NLD party chairman in Rakhine’s Buthidaung township, was abducted by the AA in December for organizing a public rally in support of State Counselor Aung San Suu Kyi as she prepared to defend Myanmar over genocide charges at the International Court of Justice in the Netherlands. Ye Thein died two weeks later during an armed assault by the Myanmar military, according to the AA..

In November of 2019, the AA also kidnapped Hawi Tin, an ethnic Chin NLD lawmaker in the national parliament from Chin state, which has also been affected by the armed conflict in Rakhine, though he was released two months later. The rebel group had accused him of providing information about the AA to the Myanmar military.

“These abductions are not helping to secure peace and end the armed conflict,” Ye Thein said. “They will have the opposite impact. We denounce such violent acts [and] demand their release as soon as possible.”

Rakhine state chief minister Nyi Pu, who is also chairman of the state’s NLD party committee, said officials were still trying to confirm the details of the incident.

“We are working with the border affairs and security minister for their release,” he said. “It’s best to secure their release as soon as possible. In the time like this, we want to resolve the problem peacefully.”

Zaw Myint Maung, Mandalay chief minister and vice chairman of the NLD’s central executive committee, noted that Section 58 of the Election Law makes it a crime to threaten parliamentary candidates or voters. The crime carries penalties of up to a year in prison, a 100,000-kyat (U.S. $76) fine, or both.

“We would like to appeal for the release of our abducted candidates as soon as possible,” Zaw Myint Maung said.

Military analyst Maung Muang Soe said there has been some AA activity in Taungup township but no armed conflict in the area.

“There is very little military activity in townships south of Yarmaung Bridge, but sometimes we’ve heard of AA activities in Taungup and on Ramree Island,” he said. Yarmaung Bridge lies on the Yangon-Sittwe Highway.

“We have heard about abductions but not about armed combat in these areas,” he said.

The abductions, come three weeks before national elections on Nov. 8 and amid raging warfare in northern Rakhine state, where four civilians were injured Wednesday during a Myanmar military offensive against the AA that included air, navy, and ground troops, villagers and a local lawmaker said.

Mortar shells landed on a government school in which residents of Pyapinyin village on the Mayu River west of Rathedaung town, were hiding. Shrapnel from the explosions hit Than Sein Maung, 35; Maung Mya Khin, 33; Maung Myat Tun, 58; and Ba Shwe, 57, they said.

The fighting between Myanmar forces and the AA that began in the Aungtharzi mountains forced more than 1,000 residents to flee their homes,

“The people in the village fled because they were not sure who was the target of the attack,” said a villager who declined to be named for safety reasons.

“They fired at any time of the day,” she said.

After villagers returned home following artillery fire Wednesday morning, morning, some later to hide in the school once a new attack began, she said.

“The rest of the villagers are taking shelter in the monastery for now,” the resident added.

The Myanmar military has been fighting with AA troops near Aungtharzi village since dawn Tuesday and on-and-off on Wednesday, with government soldiers launching an all-out offensive on the AA, other villagers said.

Khin Maung Latt, an upper house lawmaker from Rathedaung township, told RFA that the combat was the most brutal he has seen.

“The military used firepower from both the air force and navy,” he said. “The mortar shells fell like rain. Houses five or six miles from the combat area started shaking, and there were columns of smoke everywhere. There were fires in some areas.”

Villagers from Aungtharzi, which has more than 80 families, have been fleeing the area since June when the military issued warnings to stay away from nearby combat zones.

The AA said more than 700 ground troops from the government military have attacked its soldiers since Oct. 5.

A statement issued by the AA on Wednesday said Aungtharzi, Hteeswe, and Kyauktan villages had been burned down by the continuous firing of artillery by military forces.

RFA could not reach Myanmar military spokesmen for comment.

More than 226,000 people have been displaced since hostilities between the Myanmar military and AA escalated in late 2018, according to the Rakhine Ethnics Congress, a local NGO.

you sowed terror, now you reap ..