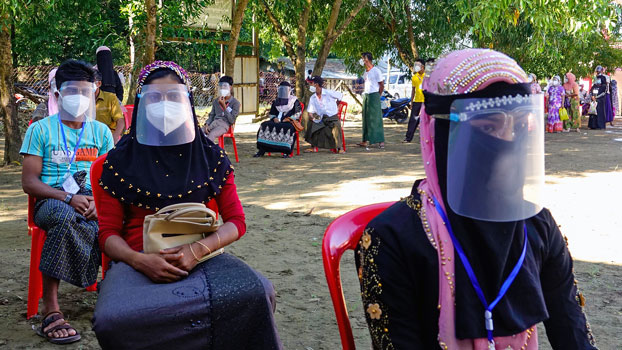 Voters wearing face shields and face masks to prevent the spread of the coronavirus wait in line to cast ballots at a polling station in western Myanmar's Rakhine state, Nov. 8, 2020.
AFP

Myanmar should hold make-up elections in areas where voting was cancelled this month due to armed conflicts and other security threats, including in Rakhine state, which has seen a halt in fighting since general elections, rights groups and residents said Wednesday.

The vote was followed by an NLD outreach to ethnic-based parties and gestures toward peace talks from the country’s powerful military, which supported holding elections in areas that didn’t vote.

Rights groups and political parties said holding a vote in Rakhine where as many as 1.5 million voters were unable to cast ballots on Nov. 8 would help clear hurdles to a peace process in the strife-torn state.

“Free and fair elections must be held at the earliest opportunity in all areas where they were suspended.”

The Union Election Commission (UEC), which oversees elections in Myanmar, suspended voting in parts of 15 townships in Kachin, Kayin, Mon, Shan, and Rakhine states, as well as in Bago region — areas deemed unsafe due to armed conflict or other unrest. Many local politicians and parties disputed the decision.

On Nov. 11, the UEC said it would hold elections in places where they had been cancelled once the areas became stable, though it did not explain how it would determine stability or when it planned to schedule the voting. President’s Office spokesperson Zaw Htay told RFA in an email on Nov. 12 that negotiations are being held to hold elections in the affected townships.

Sittwe resident Kyaw Hla Aung said elections in Rakhine would pave the way for peace talks between Myanmar forces and the rebel Arakan Army (AA), which is fighting for greater autonomy for ethnic Rakhine people in the state.

“We want both opposing parties to initiate the peace process after the elections,” he said, adding that such a situation would enable villagers displaced by the war to return to their homes and harvest their rice paddies.

The nearly two-year-long war between rebel troops and government forces has killed more than 300 civilians and displaced about 226,000 others, many of whom are living in temporary camps in Rakhine state.

“We will be able to return home only after the AA troops, the government, and military have completed the negotiations and give us a guarantee that we can go home safely,” said Saw Thein, a displaced villager from Kyauktaw township.

'Our stance is clear'

Myanmar military spokesman Major General Zaw Min Tun told RFA that lower-level personnel are in talks with the AA through unofficial intermediaries such as community leaders, and that there have been no AA ambush attacks against patrolling military units since Nov. 9.

The military is willing to translate good relations on the ground into official peace negotiations and would welcome the AA’s removal from the government’s terrorist group designation if the Arakan force is serious about peace, he said.

“Our stance is clear,” Zaw Min Tun said, noting the military’s statement on Nov. 17 supporting the AA’s call for elections in Rakhine by the end of the year.

“We welcome all positive measures that will lead to peace building,” he said. “The opposing party needs to demonstrate practical acts that could lead us to remove [the terrorist designation] and bring us together at the negotiating table.”

At a press conference in October, Zaw Htay said the government was open for either bilateral or multilateral talks with the AA if the rebels were ready to discuss peace.

AA spokesman Khine Thukha could not be reached for comment, though he told RFA on Monday that the ethnic army had ceased combat against the government military because it is seeking to build trust at a critical time.

Kyaw Zaw Oo, spokesman for the Arakan Front Party, said the government would have to remove the AA from its list of terrorist organizations before talks could proceed.

“Because the AA has been declared a terrorist group, the military will not be able to sit down at the same table with AA leaders and hold peace talks,” he said.

“There are many other obstacles,” he added, but did not elaborate. “They need to remove these obstacles first. Only then can the peace process move forward.”

“We’ve already received the equipment for the polling stations, [and] we’ve sent it to the respective townships,” he said. “We only need to receive the ballots.”

“If the authorities approve the elections, we can go ahead and get the polling stations ready,” he said.

RFA contacted the UEC for comment via phone and email, but did not receive a response.