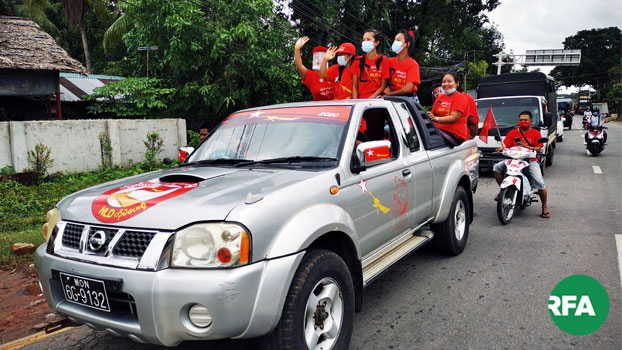 Coronavirus cases have spiked in Myanmar this month just as campaigning opened for nationwide elections, forcing political parties to deal with restrictions on rallies, stay-at-home-orders, and quarantines in the two-month race for votes on Nov. 8.

Like continental Southeast Asian neighbors Cambodia, Laos, Thailand, and Vietnam, Myanmar largely avoided widespread COVID-19 infections that spread around the globe through the first half of the year.

But Myanmar has seen a deadly return of the virus since mid-August, with spikes in the number of confirmed COVID-19 cases in populous areas and conflict zones, prompting health and election authorities to impose social-distancing rules.

The Ministry of Health and Sports announced Sunday that campaign gatherings would be restricted to 50 people who must remain six feet apart, wear face masks, and have access to hand sanitizer.

The Union Election Commission (UEC) issued guidelines for political parties and candidates — suspending door-to-door campaigning and rallies in open areas and buildings in places where the government has issued stay-at-home orders. Local
governments require candidates who visit their districts to undergo quarantines.

As of Thursday, Myanmar registered 2,150 confirmed COVID-19 cases amid the resurgence of the highly contagious respiratory illness, adding 261 new cases overnight. The country has had 14 coronavirus-related fatalities.

About 37.5 million voters in Myanmar’s population of 54 million are eligible to cast ballots in the Nov. 8 elections. Nearly 7,000 candidates from more than 90 parties or who are independents are vying for 1,171 seats available in both houses of the national parliament and in state and regional legislatures.

Campaigning is complicated by long-running wars in big states, such as Kachin and Shan, where swathes of territory are controlled by ethnic armies that restrict or ban voting.

In western Rakhine state, a 21-month-old war has forced 200,000 rural villagers to take refuge in overcrowded shelters and hampered efforts to deal with what is now Myanmar’s worst coronavirus hot spot.

On Monday, Myanmar leader Aung San Suu Kyi, who also chairs the ruling National League for Democracy (NLD) party, canceled her first campaign stop in Yangon’s Kawhmu township — her current parliamentary constituency — after a staff member tested positive for the virus, and others in contact with the person were quarantined.

But the NLD held campaign events in Myanmar’s capital Naypyidaw in which hundreds of people were involved in excess of the Health Ministry’s 50-person cap on gatherings, according to an official from the opposition Union Solidarity and Development Party (USDP).

USDP chairman Than Htay told reporters on Wednesday that he would file a complaint with the ministry about the NLD’s failure to adhere to coronavirus restrictions.

“Yesterday, I visited two villages in Zeyarthiri township in Naypyidaw, [and] I saw NLD party members campaigning with hundreds of people,” he said. “This is a blatant violation of COVID-19 restrictions.”

“I will send an official compliant letter to the ministry today,” he added. 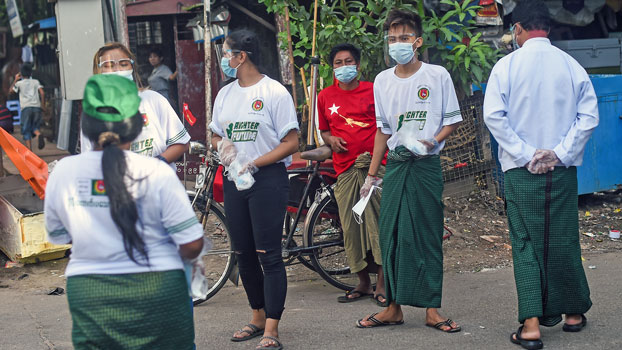 A supporter of the National League for Democracy party stands near Union Solidarity and Development Party members as they campaign for the upcoming general elections in Myanmar's commercial hub Yangon, Sept.9, 2020. Credit: AFP

'We will try our best'

Political parties and candidates in northern Rakhine state, the current epicenter of a coronavirus surge in Myanmar, also began campaigning Tuesday, though efforts to get their messages to voters are being hampered by COVID-19-related restrictions on activities and by the armed conflict between government forces and the Arakan Army.

Health Ministry officials have put in place stay-at-home orders in all 17 townships in Rakhine, some of which are also affected by government-imposed internet service blackouts aimed at stifling rebel communications. The suspension of service has placed further limitations on campaign activities, members of political parties said.

“The UEC said we can have gatherings of up to 50 people, but regional orders contradict this permission,” he said.

“We have many challenges,” he added. “We have registered our candidates to contest in the election, [so] we will try our best to campaign for the election.”

Pe Than, an ANP lawmaker who represents the Myebon township constituency and is running for reelection, said he and other candidates can’t do much given township stay-at-home orders and the ongoing hostilities in northern Rakhine state.

“Both circumstances are making election campaigning impossible,” he said. “The UEC hasn’t yet announced the townships that will not be able to hold elections, so we don’t know what to do. We just have to wait and see.”

The Health Ministry also ordered lockdowns in all but one of 44 townships in Yangon region, home to 7.6 million people and Myanmar’s largest city, where the number of COVID-19 cases also has spiked.

Small, minority parties at a loss

Many candidates from small and ethnic-minority based parties say the virus restrictions will hinder their ability to compete, while some have suggested that the elections should be postponed.

“The best we can do is go around the city in vehicles carrying a sound box playing campaign music and slogans,” said Ko Ko Gyi, chairman of the People’s Party, at the party’s campaign launch event on Tuesday. “Even for that, we now need permission from the Health Ministry.”

“Regardless of the rules and regulations, they are very difficult to strictly follow on the ground,” he added.

David Hla Myint, the chairman of the relatively new United Nationalities Democracy Party (UNDP) who is running against Aung San Suu Kyi for the Kawhmu township parliamentary seat, told local media on Thursday that the well-established parties will have an edge in campaigning.

“The established parties can do various campaign activities despite the restrictions,” he said. “We will not have equal opportunities if we hold this election under these conditions.”

“It would be best to postpone the election,” he said.

Candidates from southeastern Myanmar’s Mon state also said they are finding it difficult to do election-related activities because of the increasing number of COVID-19 infections and tighter Health Ministry restrictions.

“Now, everyone is cautious as the pandemic is getting worse,” said Aung Naing Oo from the Mon Unity Party who is the deputy speaker of the state parliament. “We are also working around-the-clock not to break the rules issued by the Health Ministry.”