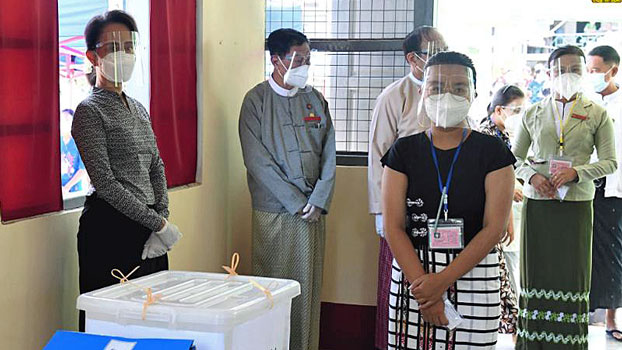 Myanmar is pulling out all the stops to hold national elections next month in the face of surging coronavirus infections, with leader Aung San Suu Kyi saying the country is receiving daily imports of protective gear from China and election authorities adding polling stations to ease crowds in populous areas.

With 12 days to go before the Nov. 8 elections, the number of confirmed COVID cases in Myanmar hit 47,666 on Tuesday, including 1,466 new cases, and 1,147 total deaths. The spike has prompted calls from some political parties to postpone voting in populous areas and hotspots, including the commercial capital Yangon.

Aung San Suu Kyi, seeking reelection after winning the previous national vote in 2015, recently reassured the public that the government is doing all it can so the  elections can be held safely amid the pandemic, saying that shipments of protective gear are arriving from neighboring China every day.

“We have planned to distribute these protective materials to all needed locations throughout the country,” she said during a public broadcast Monday evening on state-run MRTV.

“We have observed how other countries have handled the election,” she said. “We’ve observed the best examples of holding elections without affecting safety. … We’ve take into consideration the resources we have to find the best possible approach to handling the election. We have created conditions where the people can safely and confidently come out and vote.”

The Union Election Commission (UEC), which oversees voting in the country, has announced that it will expand the number of polling stations in areas with large populations, including Yangon region, home to 5.9 million people, which has seen the highest number of COVID-19 infections.

Election authorities have planned for no more than 1,000 voters at each polling station, said Kyaw Moe Kyi, a member of the Yangon Region Election Sub-Commission. He also said that officials will provide face masks and hand sanitizer and check the body temperatures of voters as preventive measures against the spread of the virus.

Regional elections authorities are setting up more than 200 such temporary voting facilities in Yangon region in addition to the existing 6,000 polling stations, Kyaw Moe Kyi said.

There are nearly 42,000 polling stations throughout the country, which will be manned by 564,000 election staffers to assist voters, according to the UEC.

The UEC also has collected advanced votes from people 60 years of age and older who were allowed to complete their ballots at home to reduce the number of voters at polling stations on Nov. 8.

On Tuesday, the UEC said it was cancelling elections in 94 village tracts in Paletwa townships of Chin state, one of the combat zones in the nearly two-year war between Myanmar forces and the rebel Arakan Army.

The UEC also said it would reschedule elections in 10 wards and village tracts in five other townships, including two in Rakhine state, which are already on the cancellation list.

The UEC had earlier cancelled voting in more than 50 townships across the country, citing military conflicts, including 15 townships in conflict-torn Shan and Rakhine states. Partial cancellations were announced in over 500 village tracts in Kachin, Karen, and Mon States and Bago region. Election authorities also called off voting in five townships in the Wa Self Administrative Region on the border with China.

Prior to the cancellations, about 37.5 million people were eligible to vote for candidates from more than 90 parties, as well as independents, to fill 1,171 seats available in both houses of the national parliament and in state and regional legislatures.

Political parties and observers have criticized the UEC’s decision to expand the number of polling places in large cities and towns, fearing additional COVID-19 outbreaks amid the voting.

The main opposition Union Solidarity and Development Party (USDP) urged the UEC in an open letter on Monday to cancel or postpone elections not only in areas affected by armed conflict, as the election body has already done, but also in places with high rates of coronavirus infections, including Yangon.

The USDP’s letter noted that Yangon region was not on the list of townships where voting has been cancelled. The statement also called for guarantees of the safety of voters and election staff at polling stations.

David Hla Myint, chairman of the relatively new United Nationalities Democracy Party (UNDP) who is running against Aung San Suu Kyi for a parliamentary seat in Yangon, said he remains concerned about the spread of the coronavirus in Myanmar’s most densely populated region.

“The rate of infection is not down yet,” he said. “I wonder if it really will be safe for the voters in Yangon during the election.”

“I don’t think the situation is safe for them,” he said, and repeated an earlier call for the UEC to postpone the vote.

NLD spokesman Myo Nyunt pointed to the United States, which recorded more than 9 million total confirmed COVID-19 cases on Tuesday, including 47,244 new cases, and 231,744 total deaths, as a country that is still holding elections despite growing infection rates.

“Canceling the election on account of the pandemic just reflects the wishes of some people,” he said. “It doesn’t reflect the situation on the ground.”

UEC officials earlier told RFA that Myanmar had studied the cases of Japan, Singapore, South Korea, and Sri Lanka for ideas on voting under pandemic conditions.

The UEC has sought recommendations from the military, government administrative departments, and state and regional election subcommissions about canceling elections in each township, he said, but added that he could not elaborate on the UEC’s decisions since the NLD didn’t have details.

“There are still concerns among voters in locations like Yangon with high infection rates,” said Mya Nandar Thin, an election consultant at the New Myanmar Foundation. “Many of them are considering whether they should go out to vote or not. Some very motivated voters are determined to get out and vote.”

Win Ko, a resident of Yangon’s Thingangyun township, said fears of the pandemic would not prevent him from voting.

“I will definitely go out to vote,” he said. “It is a compulsory duty. I don’t care about the pandemic. I will protect myself by wearing a face mask and a face shield.”

“I have concerns, but if we comply with the guidelines, there will be fewer chances of getting infected,” he added.