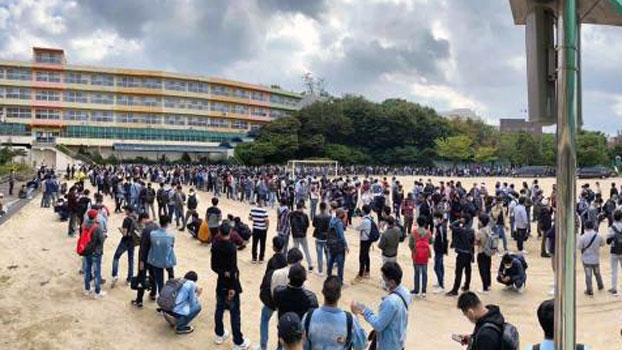 With a month to go before Myanmar’s general elections on Nov. 8, the county’s two main political parties warned followers on Wednesday about misleading and false claims about absentee ballots for expatriate citizens spreading on social media.

The ruling National League for Democracy (NLD) and the military-backed Union Solidarity and Development Party (USDP) have urged social media users not to fall for or spread “fake news” reports that early overseas votes are already being counted. Early absentee votes are counted only on Election Day, they stressed.

Nearly 110,000 Myanmar expatriates who are eligible to vote began casting ballots at overseas polling stations in the country’s various embassies on Oct. 1.

When Myanmar citizens living in South Korea submitted their ballots at the Myanmar Embassy in Seoul on Oct. 2, a false report began circulating on social media about the number of votes for leader Aung San Suu Kyi’s NLD.

The Myanmar Embassy in Seoul, however, reported that there are only 9,810 registered Myanmar voters in South Korea.

Myanmar’s Election Law requires the heads of mission in its embassies to send all advance votes securely enclosed in envelopes to the Union Election Commission (UEC) via the Ministry of Foreign Affairs.

“Whoever started these fake reports can derail the entire election process,” said Thein Htun Oo, spokesman for the opposition USDP, urging people not to share the fabricated reports.

“All the major activities of the election will take place only on Nov. 8, [so] we should not believe these fake reports as the election date nears,” he added. 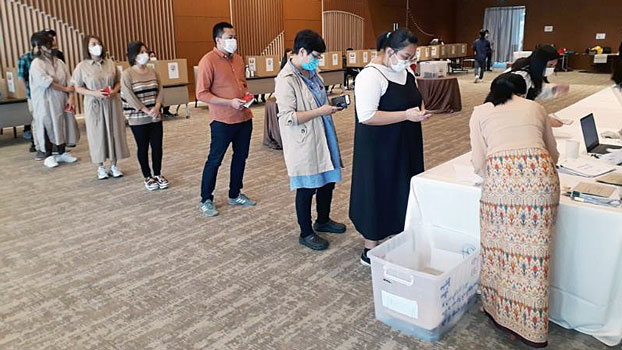 False reports were also posted that the USDP had won the most votes at polling stations in the United States and Australia, although Myanmar citizens living in those countries cannot cast ballots until Oct. 10.

Another post claimed that Myanmar voters in Australia cast 128 ballots for the NDP and 3,996 for the USDP.

“We know they are false reports because the advance ballots will be added to the regular ballots in the respective polling stations and counted altogether,” he told RFA.

Monywa Aung Shin urged voters not to fall for the false reports because Myanmar’s embassies are handling the balloting meticulously.

Mon Yee Min Lwin, who cast her vote at the Myanmar Embassy in Tokyo, said “the entire process was convenient and safe” in contrast to the rumors.

“As we entered the embassy, I was accompanied to a partitioned polling station and given a secret ballot,” she told RFA. “I checked the desired party candidate, put my ballot into the envelope, and dropped it into the ballot box.”

“The people who are sharing false reports about the voting are all wrong,” added Mon Yee Min Lwin.

Mya Nandar Thin, a consultant from the New Myanmar Foundation, which monitors elections, said the false reports about votes cast overseas probably would have no major impact on voting in Myanmar because the numbers are small.

But the incidents underscore that “we should educate people more about the election process because most people are not aware of the procedures,” she told RFA.

“For example, when someone has preconceived notions about a political party, they will share anything about the party without verifying the information,” Mya Nandar Thin said. “We should improve election awareness among the people.”

Myanmar is a multiethnic nation of 54 million people the size of France or Texas. Nearly 7,000 candidates from more than 90 parties, as well as independents, are vying for 1,171 seats available in both houses of the national parliament and in state and regional legislatures.

The stiffest competition will be between the NLD, which is fielding 1,143 candidates, and the USDP, which has put forward 1,129 candidates.