A resurgence of COVID-19 since mid-August, concerns about security, and anger at the cancellation of voting in areas under conflict, did not appear to deter the nation’s 37.5 million eligible voters from turning out to choose national and regional lawmakers Sunday.

Voting results are not expected until midweek, but NLD supporters staged colorful celebrations in the largest city Yangon and other ruling party strongholds in the central parts of the country of 54 million people.

“As far as I can estimate, we have won enough seats in both houses of the Union parliament to form a government,” NLD spokesman Myo Nyunt told RFA in an exclusive interview.

Observers said Sunday’s vote, only the second democratic election in Myanmar since the restoration of civilian rule after five decades of military dictatorship, went smoothly despite concerns about security, coronavirus crowds, and the suspension of voting in conflict zones.

As of Monday night, the Union Election Commission (UEC) was still waiting for the results of most of contests nationwide.

“They [the UEC] are issuing some results now, but the rate is very slow,” Myo Nyunt said. “They should be able to issue them [all] within three or four days.”

In the 2015 general elections, the NLD won 81 percent of the parliamentary seats up for grabs in a landslide victory over the military-backed Union Solidarity and Development Party (USDP), which ran the country from 2011 to 2016.

Polling before the vote indicated Myanmar’s voters would give Aung San Suu Kyi, a former political prisoner and Nobel laureate, a second five-year term, after she won office in 2015 on a platform of establishing civilian government and ending long and costly wars with armed ethnic groups.

Though preliminary results indicate that most NLD candidates won their races, mainstream opposition and ethnic party contenders picked up some parliamentary sets in local elections. 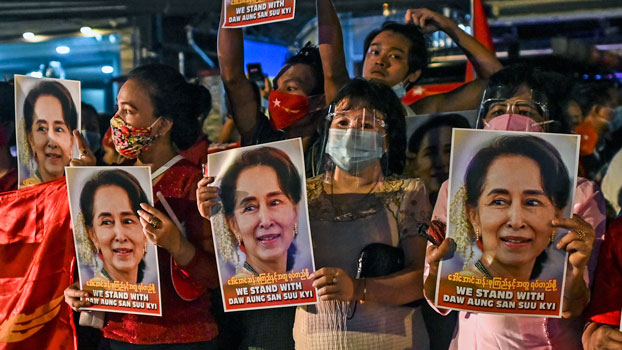 Myanmar supporters of the National League for Democracy hold posters with the image of State Counselor Aung San Suu Kyi as they celebrate in front of the party's headquarters in Yangon, Nov. 9, 2020. Credit: AFP

Aung San Suu Kyi won more than 60,000 votes for the lower house parliamentary seat for Yangon’s Kawhmu township, beating out a USDP candidate who won only about 11,000 votes, according to the online journal The Irrawaddy.

The NLD won all seats in the Naypyidaw Union territory except for the military-dominated Zeyarthiri township, where USDP chairman Than Htay clinched the race, according to the UEC, which oversees elections. He secured 36,325 votes, while Moe Swe of the NLD received 30,965.

Myanmar military chief Senior Gen Min Aung Hlaing, who cast his ballot in Zeyarthiri township, told reporters on Sunday that he would accept the election results, despite army criticism of the civilian-led government and the UEC for alleged election mismanagement that caused stir days before Sunday’s vote.

“The military strongly criticized the weaknesses of the UEC, [and] this has made many people in the country confused and uncertain,” said political analyst Maung Maung Soe. “At a time like this, it is very good news that the military chief confirmed that he will accept the election results.”

The Shan Nationalities League for Democracy (SNLD), a political party in northern Shan state, appears to have defended all the parliamentary seats it won in the 2015 election, with 43 of 46 candidates prevailing, said SNLD vice chairman Sai Nyunt Lwin.

“But, some 60,000 voters lost their right to vote, so we lost three candidates in Mong Kung township because of the cancellation of the election,” he said.

The UEC suspended balloting in several townships in ethnic minority states due to unrest and armed conflict, disenfranchising as many as 1.5 million voters, most of them in Rakhine state, where fighting has raged for nearly two years.

Though vote counting continued in Rakhine Monday evening, the Arakan National Party (ANP) reportedly won in the state capital Sittwe and in Taungup township, while the NLD took Gwa and Thandwe townships.

“The KSPP had hoped for the support of everyone in Sumprabum township and for 90 percent [of votes] in all of Kachin state, but it didn’t happen as we expected,” said party candidate N Shen Hsan Awng. 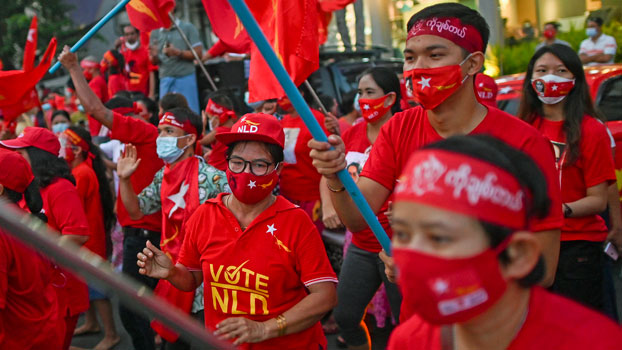 Myanmar supporters of the National League for Democracy party celebrate outside the party's headquarters in Yangon, Nov. 9, 2020, after NLD officials said they were confident of a landslide victory in Sunday's elections. Credit: AFP

Sai Ye Kyaw Swar Myint, executive director of the election watchdog group the People’s Alliance for Credible Elections (PACE), said many voters could not cast ballots because their names were not on voter lists.

“We found that at one-third of all polling stations, between one and 10 voters had left without casting votes because their names were not on the voter lists,” he said.

“This is an important factor in evaluating the quality of the voter lists,” he said. “It tells us that the authorities need to review their methods and mechanisms in compiling voter lists to ensure every qualified voter is included on them.”

Sunday’s elections, the second since the end of military rule, “mark an important step in the country’s democratic transition,” U.S. Secretary of State Mike Pompeo said in a statement that also listed concerns about the vote.

Myanmar’s 2008 constitution that reserves 25 percent of seats in all legislative chambers for unelected uniformed soldiers, disfranchisement of the Rohingya and other minorities, and the cancellation of voting in a number of precincts “prevent the realization of a more democratic and civilian government,” the statement said.

The head of the Japanese government’s election observer team said the international community will recognize the elections.

“There has been international criticism of this year’s elections, but I think the international community will recognize the elections in Myanmar as free, fair and accurate,” Yohei Sasakawa, chairman of The Nippon Foundation and leader of election observer team, told an online news conference on Monday.

One Rohingya refugee leader in southeastern Bangladesh’s Cox’s Bazar, where more than one million Rohingya from Myanmar live in massive displacement camps after a military campaign that drove them out of Rakhine in 2017, said Aung San Suu Kyi’s re-election “is a good development for us.”

“If a new government came to power, then the Rohingya population in Rakhine would face more troubles and difficult times,” said Abdur Rahman, vice chairman of the Arakan Rohingya Society for Peace and Development.

“The Rohingya community once had very good relations with the party of Aung San Suu Kyi. … We hope that we will be able to return to our homeland during the tenure of her second term in office,” he said.

“My personal opinion is that we should be neither pleased nor sad about the victory of Aung San Suu Kyi’s party,” said Mohammad Alam, president of the Leda refugee camp in Teknaf in the Bangladeshi coastal town of Cox’s Bazar.

“This is because the military rules Myanmar no matter who is in power,” he said.