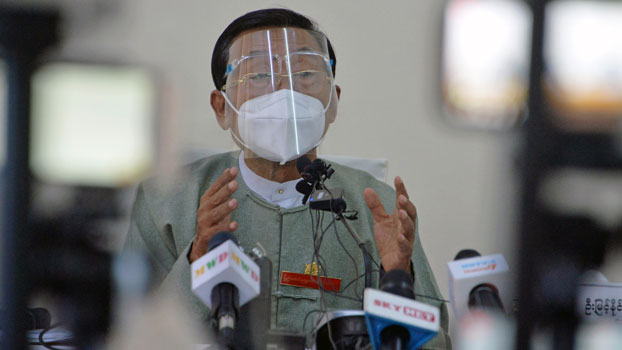 Myint Naing, a member of and spokesman for Myanmar's Union Election Commission, speaks to reporters during a press conference in Naypyidaw, Nov. 11, 2020.
AFP

The ruling National League for Democracy (NLD) was quick this week to claim that Sunday’s vote had given Aung San Suu Kyi’s party a second five-year mandate, with nearly 400 of the 644 seats in the bicameral parliament needed to form a government.

Partial voting results in the country of 54 million people on Wednesday showed that the opposition Union Solidarity and Development Party (USDP) has won 21 seats, compared to the 40 seats it held in both chambers of the outgoing parliament.

“We held this election freely and fairly. Most of the major parties that contested in the elections accept this,” Union Election Commission (UEC) spokesman Myint Naing told a news conference in the capital Naypyidaw on Wednesday.

“The laws allow the regional and state election subcommissions to make early announcements,” he said. “The UEC has made overall announcements based on the results from respective commissions.”

Myint Naing said the electoral body would not hold a new vote as demanded by the USDP, which criticized the voting as unfair, alleging ruling party interference and criticizing the slow release of results.

He pointed out that it took 10 days before election officials announced the official results of the last general elections in 2015.

“We are trying to speed up the process,” Myint Naing said amid tightened security in Naypyidaw as about 30 USDP supporters protested outside UEC headquarters.

The full outcome is expected early next week. 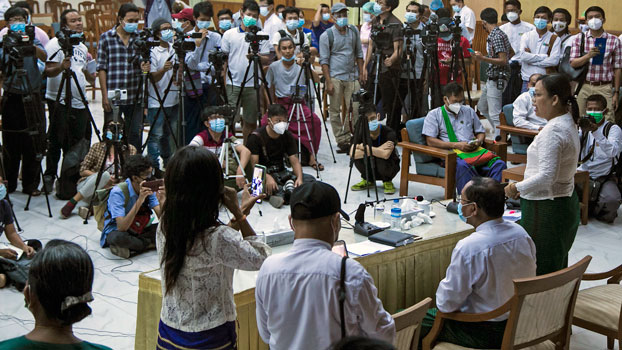 Claiming that the election was unfair, the USDP on Wednesday called for a new election jointly held by the UEC and the country’s powerful military, at a news conference in Yangon, the commercial capital.

“We call on the UEC jointly with the military to immediately hold a new non-biased, free, and systematic election soon,” said Win Win Aung, an executive member of the USDP’s Yangon region committee, reading from a prepared statement.

The USDP has not presented evidence to support its claims, Myint Naing said at the UEC news conference.

Military chief Senior General Min Aung Hlaing had told reporters on election day that he would accept the election results.

The USDP said that most of the volunteers and schoolteachers recruited to work in polling stations were NLD supporters, though the party provided no evidence. It also said that election staffers who collected advance votes were accompanied by up to five NLD supporters wearing T-shirts bearing the party’s logo.

The NLD and the Myanmar Teachers’ Federation dismissed the accusations as baseless, with the teachers’ group threatening legal action against the USDP for defamatory remarks.

NLD spokesman Monywa Aung Shin noted that countries around the world had already recognized the elections as free and fair and that it would be impossible to hold a new election for the sake of one political party.

“This is a meaningless demand,” he said.

Mya Nandar Thin, an election consultant at the New Myanmar Foundation, agreed that the UEC’s call for new elections is unrealistic.

“The election is over and people have cast their votes,” she said.”The people demonstrated their choice on Nov. 8.”

The USDP formed the quasi-military government that managed Myanmar’s transition from harsh military rule, governing Myanmar from 2011 until it lost to the NLD in a landslide in 2015, paving the way for Aung San Suu Kyi’s civilian administration.

In opposition, the USDP was seen as largely indistinct from the military, which is guaranteed 25 percent of seats in national and regional assemblies under the 2008 constitution, written by the military junta ruling at the time to give soldiers an effective veto in parliament. 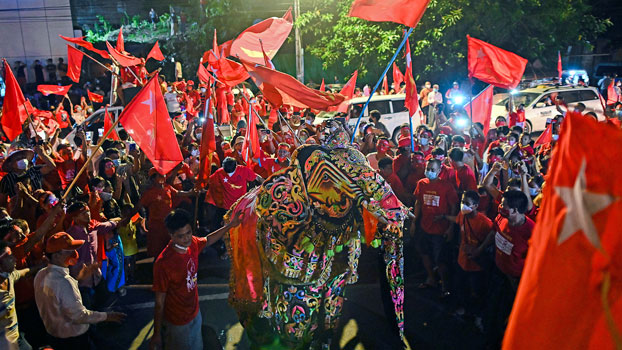 The UEC had come under fire during the last month of campaigning for its decision to cancel voting in several regions where the military is fighting wars with ethnic armies, disenfranchising as many as 1.5 million voters.

Some small parties joined the USDP in accusing the UEC of a pro-NLD tilt after authorities censored statements critical of the government in campaign broadcasts on state television.

Some 5,639 candidates, hopefuls from 87 political parties and 260 independents, competed for 1,117 parliamentary seats in the elections and 29 ethnic affairs minister positions, according to the UEC. The suspension of voting in war-torn Rakhine and Shan states has meant a reduction of 22 seats in the Union Parliament.

Health officials, meanwhile expressed concern over large crowds of NLD supporters celebrating in public, warning that the gatherings could cause massive outbreaks of the coronavirus, which surfaced in Myanmar in March and has seen a resurgence since mid-August.

Medical experts said political parties should not hold large celebratory events or victory parades, but rather rein in members and supporters to protect them.

Hundreds of NLD supporters have gathered daily outside the party’s headquarters in Yangon to celebrate the election results, while NLD backers in other states and regions have paraded in the streets.

“This is not appropriate,” said Dr. Maw Maw Oo from Yangon General Hospital’s emergency medicine department. “If there are massive outbreaks after the celebrations, those who caused them will be responsible. The victory is over. I want to appeal to citizens not to turn the good news into bad news.”

“People need to abide by the rules, and the authorities need to seriously enforce them — not just pretend to enforce them,” he said, referring to stay-at-home orders, restrictions on public gatherings, and the wearing of face masks in public.

Myanmar’s Ministry of Health and Sports has extended stay-at-home orders until Nov. 30.

“We advised the party members not to participate in the supporter celebrations,” he said.

Dr. Okka Kyi Win, a general practitioner and resident of Yangon, agreed that there is little the NLD can do to prevent the celebrations.

“It would be challenging to completely ban these gatherings,” he said. “People are now feeling exuberant.”