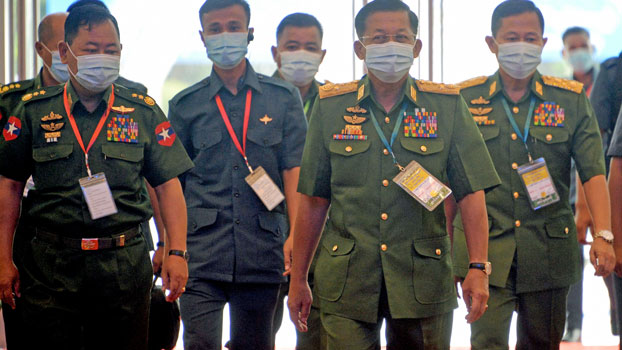 Myanmar’s armed forces and their families can “cast their votes freely” in national elections this weekend, but should back candidates that support the military’s “Three Main National Causes,” the country’s powerful defense chief said Thursday as concerns arose about secrecy of army voting lists.

The nation of 54 million people, which emerged from 50 years of harsh military rule a decade ago, goes to the polls on Nov. 8. Some 7,000 candidates from more than 90 parties vying for more than 1,100 seats in both houses of the national parliament and in state and regional legislatures.

Senior General Min Aung Hlaing, whose military is guaranteed 25 percent of seats in national and regional legislatures under a constitution it wrote in 2008, cited the military’s main motto when he told an online conference with division commanders how the armed forces should approach voting Sunday.

“Next, the candidates should have a genuine will to improve the community.”

“All service members and their family members should keep this in mind and cast their votes freely,” the commander in chief said.

The remarks by Min Aung Hlaing, who did not recommend a political party, follow days of controversy after he condemned the government for poor handling of election preparations in comments that the government said overstepped rules against government officials getting involved in partisan politics. The military denied he engaged in partisanship.

While no political party advocates breaking up the Union, the party closest to the military is the main opposition Union Solidarity and Development Party (USDP), which is made up of former military officers from Myanmar’s 2011-2016 quasi-civilian government and holds only 42 seats in both chambers of parliament.

The rare intervention by the military is troubling to many in Myanmar, where in 1990, the army nullified the results of an election won handily by the National League for Democracy (NLD) and put party leader Aung San Suu Kyi under house arrest for 15 years. The NLD was legalized only in 2010.

A cause for concern

Earlier on Thursday, the ruling NLD and an election watchdog group criticized a decision by election authorities to not release voter lists for military service members and their families, following a decision by the armed forces to withhold the information for security reasons.

The NLD and the democracy NGO Kanaung Institute say that keeping military voter lists secret could result in unreliable votes, as voting on military bases has been a cause for concern due to a lack of transparency and limited monitoring of the balloting process.

The military considers its voter lists classified information and says that anyone who releases such data is in violation of the colonial-era Official Secrets Act.

According to the monitoring outfit Global Firepower, Myanmar has 406,000 active military personnel. The Union Election Commission (UEC), the independent body responsible for elections in Myanmar, has set up 632 polling stations outside of military bases for soldiers and their family members.

Win Shein, chairman of the Mandalay Region Election Subcommittee, said collecting voter information on military bases is not the same as it is in civilian areas because of security reasons.

“We cannot release the numbers because of security rules,” he told RFA, when asked the number of military service members who are eligible to vote in national elections on Sunday.

Soldiers deployed on missions are allowed to participate in advanced voting and must submit their sealed ballots to their commanders, who will forward them to the respective township election subcommissions, he said

A process by which military voter lists can be checked for accuracy is needed, said NLD spokesman Myo Nyunt.

“Whether it is for the service members or civilians, the compilation of voter lists should have more transparency, and we should question their credibility,” he said. “So, we need a system that allows us to check whether the military voters on the list actually exist.”

Than Myat Soe, chief executive officer of the Kanaung Institute, a Mandalay-based NGO that works to promote democracy and public participation in governance, also chided election authorities for not ensuring the release of all voter information.

“The authorities should do better when releasing voter information because we are in a democratic transition and aiming to have free and fair elections,” he said, noting that election officials did not issue military voter information during the last general elections in 2015.

“We are worried that they will do it again in 2020 and that it has become the norm,” he said. “This lack of transparency could affect the democratic transition.”

“Both the UEC and the military refuse to release the lists. This should be for their own security,” he said.

“There are many service members among the troops deployed in the western and northeastern military command divisions, where there is armed combat,” he said. “If we release the voter lists, the enemy will learn about the manpower of the troops.”

The UEC knows how many military service members are going to vote, and the military has accurate information on their numbers and identities, he added.

In the 2015 elections, polling stations for the military service members were located inside bases, but in October 2019, Myanmar’s parliament approved legislation to set up stations outside bases despite protests by military-appointed lawmakers.

Election observers said soldiers who vote will have greater freedom in casting their ballots with polling stations located outside their bases.

Aye Kyaw, executive director of the Yangon-based Open Myanmar Initiative, an independent NGO that promotes the ideals of Myanmar’s democratic movement, took issue with the notion that the release of military voter information should be dealt with as a criminal offense.

“There is information that it can be released without revealing the classified information that’s important for security,” he said. “It makes sense that the military doesn’t want to reveal its manpower and deployments in certain areas.”