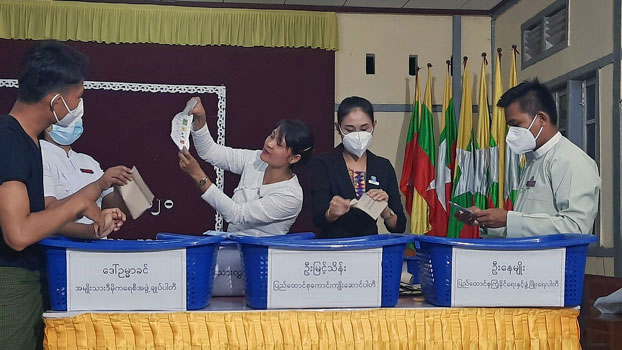 Myanmar voters braved long lines Sunday and were expected to return Aung San Suu Kyi and her ruling National League for Democracy to power in a country racked with civil war and struggling with a surge in the coronavirus pandemic.

Polling before the vote indicated Myanmar’s voters will give the former political prisoner and Nobel laureate a second five-year term, after she won office in 2015 on a platform of establishing civilian government and ending long and costly wars with armed ethnic groups.

Observers said Sunday’s vote, only the second democratic election in Myanmar since the restoration of civilian rule after five decades of military dictatorship, went smoothly despite concerns about security, coronavirus crowds, and the cancellation of voting in areas under conflict.

“So far, I see this election going successfully and peacefully, except for some minor issues, such as finding fake stamps or voting disputes with polling staffers,” said Thein Than Oo, a member of the Myanmar Lawyers’ Network, a group of independent lawyers who focus on human rights cases.

The watchdog group People’s Alliance for Credible Elections (PACE) told local media that more than 90 percent of polling stations provided masks and sanitizing gel, and that the majority of stations were open on time.

Effectively the nation’s civilian leader, the 75-year-old Aung San Suu Kyi serves in the position of state counselor because the military-drafted constitution bars her from becoming president as she has two sons who are foreign nationals.

She and her NLD are seeking reelection after taking power from the pro-military Union Solidarity and Development Party (USDP) in the last national vote held in 2015. The stiffest competition again Sunday was between the NLD, which fielded 1,143 candidates, and the USDP, which put 1,129 candidates forward in a race featuring some 90 parties and independents.

Voting results in the country of 54 million people are not expected until Monday.

A resurgence of COVID-19 since mid-August did not appear to deter the nation’s 37.5 million eligible voters from casting ballots. As of Sunday, Myanmar recorded 61,377 confirmed coronavirus cases, including 1,029 new cases, and a total 1,420 deaths since March.

Aung San Suu Kyi remains popular at home, particularly among the majority ethnic Bamars, despite global condemnation of her civilian-led government's handling of the expulsion of 740,000 Rohingya Muslims to Bangladesh in 2017 and her defense of military atrocities in an ongoing international genocide trial. 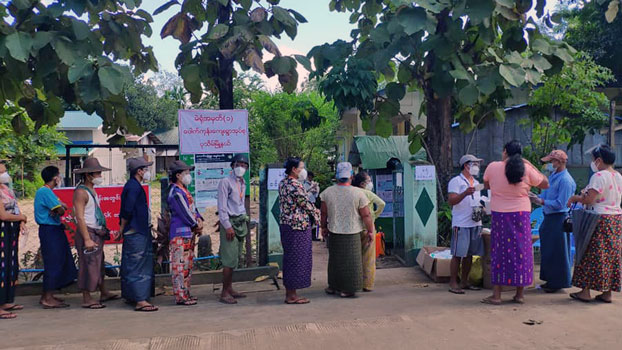 ‘Voting with their hearts’

Although the Rohingya crisis was not a factor for voters, U.N. Secretary-General António Guterres on Friday said he hoped the election would “help pave the way for refugee returns in safety and dignity.”

Among other shortcomings, Aung San Suu Kyi struggled to make headway in her signature policy goal of winding down wars the national army has been fighting in states dominated by ethnic minority groups, and her NLD is expected to pay a price for that Sunday.

And despite its pro-democracy reputation, the NLD government has seen continued use of defamation and telecommunications laws against journalists and activists critical of the government and military.

“So far, the results for the NLD have been better than expected,” Aung Naing Oo, executive director of the Center for Peace and Reconciliation, told RFA.

“Basically, people are voting with their hearts rather than with their brains,” he said.

In some ethnic minority-dominated states, national election authorities had cancelled balloting in advance as a security measure amid unrest and armed conflict, drawing sharp criticism at home and abroad.

Last month Human Rights Watch decried the elections as “fundamentally flawed,” noting the exclusion of the ethnic Rohingya minority from voting lists and the suspension of voting in ethnic minority areas that disenfranchised more than 1.5 million people. 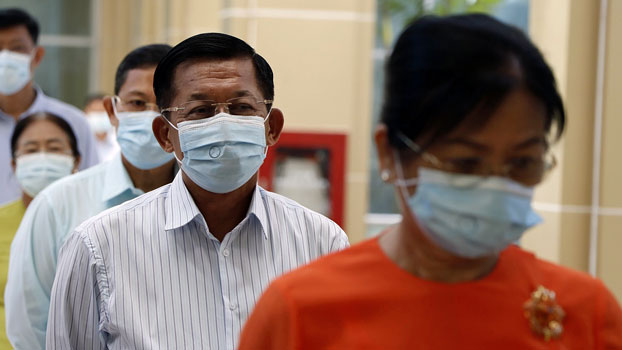 In the Yangon region, many ethnic Rakhines could not cast votes for the Rakhine ethnic affairs minister position, said Htoot May, a sitting lawmaker previously affiliated with the Arakan National Party now running as an independent candidate.

“They were told that their names were not included on the list of ethnic Rakhines,” she said. “This occurred in many townships of Yangon region.”

“I have received hundreds of telephone calls from voters since 6 a.m. complaining about it,” added Htoot May.

“The UEC [Union Election Commission] failed to assign enough staffers to the polling stations, and some didn’t show up,” he said, so that no one was available to take people’s temperatures, distribute facial masks, and spray sanitizer to disinfect voters and polling areas.

“Many voters became upset with the mess and left without casting their votes,” Lin Htin Sie said.

“Some polling stations were overcrowded, while there was no one at other stations,” he added.

Myanmar military chief Senior General Min Aung Hlaing told reporters Sunday morning that he would accept the results of the vote, despite saying earlier in the week that government mishandling of voting arrangements would lead to an election that was not free and fair.

“I have to accept the result that comes from the people’s desire,” he said after casting his ballot at a polling station in the capital Naypyidaw. Min Aung Hlaing was hit in July with British sanctions — an asset freeze and travel ban for “notorious” human rights abuses in Rakhine state.

“I voted for the party which emphasizes the protection of our nationality, our race, and our religion and wisdom … and [the military’s] Three Main National Causes,” he told reporters, referring to the non-disintegration of the Union, non-disintegration of national solidarity, and the perpetuation of sovereignty. 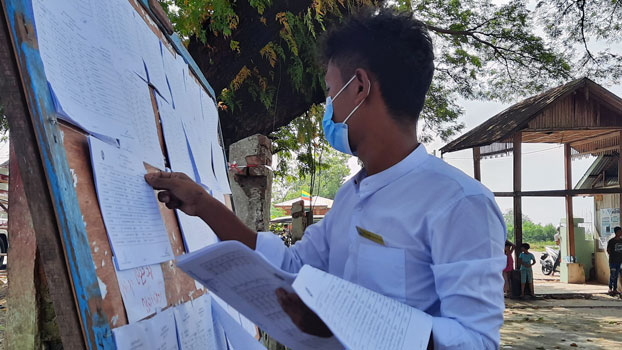 A local election official checks a voter list on a board at a polling station in Dawei township, southern Myanmar's Tanintharyi region, Nov. 8, 2020. Credit: RFA

Uniformed army soldiers are guaranteed 25 percent of seats in national and regional legislatures under the constitution the military wrote in 2008, giving them an effective veto over any significant changes to the charter, which require more than75 percent support in parliament.

In densely populated Lewe township of the Naypyidaw Union Territory, voters had long waits before they could cast their ballots because many people were not familiar with the voting process, said Kyaw Soe Moe, an administrative official from the township’s first ward.

“The challenge was that most voters didn’t understand the voting process no matter how much we tried to educate them,” he said. “So, although we did our best to facilitate the process, there were delays.”

Many voters had problems signing their names, while others did not know how to affix stamps next to the candidates of their choice on ballot tickets, he said.

Many Rohingyas with valid identification cards were not allowed to vote because their names were not on voter lists, said Maung Maung Soe, a voter from Thet Kal Pyin village in Sittwe township.

“Many voters from my village were left off the voter list because their names didn’t get to the election commission in time,” he said.

“Some of them are full-fledged citizens holding national ID cards,” he said. “There are more than 300 villagers with some form of national ID cards, [but] only 25 were included on the list. We are pretty disappointed. ”