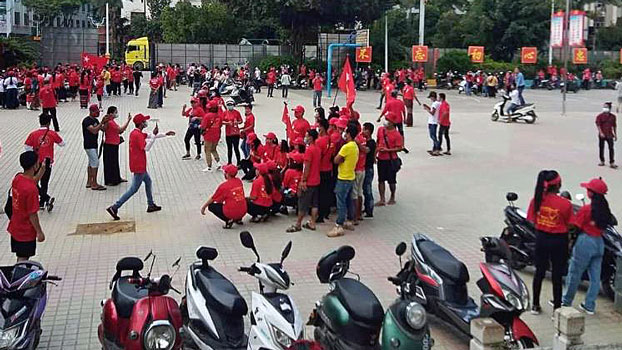 More than 900 Myanmar migrant workers in China were detained for 12 hours by local police after they staged a motorcycle rally Friday to demand that they be allowed to vote for leader Aung San Suu Kyi’s ruling party in national elections next month, a Myanmar state government official said.

Police in Ruili, a Chinese border town across the Shweli River from Myanmar, were still holding three leaders of the rally, which saw 904 migrant workers, wearing T-shirts, caps, and headbands with National League for Democracy (NLD) logos, in a procession along the border for more than three hours.

The migrant workers, who demonstrated out of discontent because they cannot vote in the upcoming election due to their semi-legal status, were confined in a jail in Ruili before all but three workers identified as organizers of the rally were released, said Soe Nyunt Lwin, planning and finance minister for Shan state on the Myanmar side of the border.

“The Muse district administrator informed me early this morning that they had been released,” Soe Nyunt Lwin told RFA. Muse is the main Myanmar border town with China.

“No matter which party they are supporting, they are our citizens, so we tried to secure their release as soon as we heard about them,” he said, adding that the three rally organizers will be held in jail for 15 days.

Myanmar permits its overseas citizens and migrant workers to vote at embassies, where voting has already begun for the Nov. 8 elections. Other Myanmar nationals living in China will be able to cast ballots there on Oct. 10-11.

But unlike Myanmar’s workers in other destination countries like South Korea and Japan, most Myanmar workers in Chinese border towns are “negotiated laborers” who do not hold full legal visas that allow them to cross the border freely until the fixed-term document expires. Coronavirus restrictions further complicate travel.

“We want to be able to vote, but because we are abroad, we don’t have the chance to vote,” said a migrant worker released from jail who gave his name as Ko Kyaw. “We are willing to cast our votes though we live far away from our homes [in Myanmar].”

If the migrants return to Myanmar to vote, they will have trouble returning to their jobs in Ruili because of  COVID-19 restrictions there, he said.

“That’s why we are calling for an opportunity to vote in Ruili,” Ko Kyaw said.

Strict curbs on civil liberties rule out political rallies in China’s one-party state, but Chinese authorities have tightened regulations on public gatherings as a preventive measure against the spread of the coronavirus, especially in border towns.

Chinese authorities, meanwhile, are still holding 200 motorbikes and the immigration documents of those who participated in the rally.

Soe Nyunt Lwin said Myanmar authorities will talk with Chinese regional authorities to find a way to allow the workers to temporarily cross the border into Myanmar to vote and return to their jobs in China without any problems.

RFA contacted Tun Aung Kyaw’s office in Kunming and the Chinese Embassy in Yangon by phone and email for an update, but not one responded.

“Myanmar citizens in China may have the motivation to show their support for the NLD party, but the rules are very solid here,” she said. “They issued a lockdown order in Ruili for seven full days recently and screened everyone, including Myanmar citizens, for the virus for free.”

In September, Chinese authorities tested the more than 200,000 people living in Ruili for the virus after two Myanmar workers who had been crossing the border illegally were found to be COVID-positive.

“They are working very hard to contain the infection,” Hla Kyaw Zawl said. “Myanmar migrant workers got arrested because they don’t comply with the rules here.”

NLD spokesman Monywa Aung Shin said he hoped that authorities would make arrangements so the migrant workers could be able to vote with absentee ballots.

“It is good that they showed their support for the NLD by holding a rally,” he said.

“We learned that there are NLD supporters there,” he said. “We are working with local authorities to collect their advance votes in the border town of Muse.”

Myanmar migrant workers in Ruili told RFA that there are more than 100,000 Myanmar nationals working in both Ruili and Jiegao.