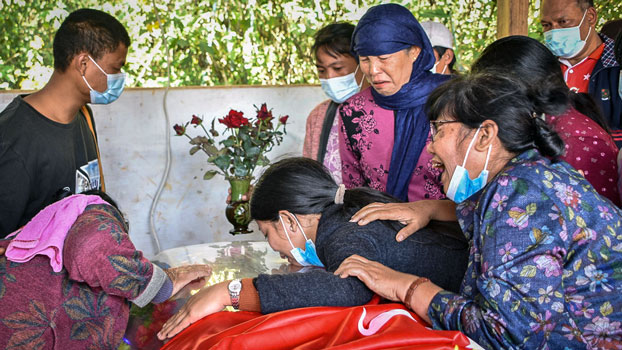 Friends and relatives mourn the death of lawmaker-elect Htike Zaw, a National League for Democracy politician gunned down by unknown assailants, at his funeral in Kyaukme township, Myanmar's northern Shan state, Nov. 22, 2020.
RFA

It was not immediately clear if the killing of Htike Zaw, who had just won a seat for the National League for Democracy (NLD) representing northern Shan state in the upper house of parliament, was motivated by politics or a personal matter in a region that has seen shootings and armed skirmishes among militiamen.

Less than two weeks after his election victory on Nov. 8, Htike Zaw was shot in the chest Saturday evening as he tended a grocery store attached to his home in Pin Tain village, Kyaukme township, his widow told RFA.

“I was preparing a meal, and he was making betel quids at the store,” said Htike Zaw’s widow, Ohnmar Htwe, referring to a popular stimulant made from the nut of the Areca palm.

“At the time, I heard two gunshots. Then, he screamed, ‘I’ve been shot,’ and he ran into the house as I was running out. He collapsed in my arms,” she said. Htike Zaw was immediately taken to the hospital, but died upon arrival, others said.

Shan state, Myanmar’s largest state and home to the Shan, the country’s second-largest ethnic group, has been under armed conflict between government forces and ethnic-based armies fighting for autonomy since 1958, 10 years after the former Burma gained independence from Britain in 1948.

RCSS troops are active mainly in the area where the shooting occurred, local residents said, but RCSS spokesman Lieutenant Colonel Sai Aom Khur asserted that the forces stay away from urban areas.

“Although RCSS troops are active in the area, we are mostly present only in the forests,” he told RFA. “We are not present on the streets of villages and towns.”

SSPP spokesman Major Sai Than Aung denounced the crime and said the ethnic army was not behind the killing.

“We don’t let any of our members commit such acts,” he said, adding that SSPP soldiers have not been active in the area around Pin Tain village since they last engaged in combat there in 2018.

TNLA spokesman Colonel Mei Eik Kyaw said his army’s troops are active only in the mountainous area of Kyaukme and that they were not in the area where Htike Zaw lived.

“Members of our army are not allowed to commit such lawless killings of civilians,” he said. “We never condone such acts. We denounce such violent acts.”

“We offer our deepest condolences to the family and friends of U [honorific] Htike Zaw, a newly elected member of the Union Parliament, who was shot and killed on Nov. 21, 2020,” said a statement posted on Facebook by the U.S. Embassy in Yangon.

In Myanmar’s Nov. 8 general elections, Htike Zaw ran for the upper house parliamentary seat representing the No. 1 electoral district in northern Shan state, which includes Kyaukme and five other townships. A by-election will be held to elect another candidate to the position.

An official from the Shan state police force told RFA that a special investigative unit had been formed in Myanmar’s capital Naypyidaw to probe the murder of Htike Zaw.

The NLD, which won the elections in a landslide, issued a statement on Saturday denouncing the assassination of the elected lawmaker and urging authorities to find those responsible for the crime.

Myo Nyunt, an NLD central executive committee member, said the assassination could have been politically motivated.

“We are not accusing anyone, we are only denouncing the act,” he said. “We suspect that this act of killing is related to politics. I want to warn all of our NLD members to go about their lives with caution and not to respond to terrorist acts with violent means, but to respond calmly by legal means only.”

Authorities have yet to find any evidence in the killing in Kyaukme town, a tense area which has seen similar shooting incidents in the past, Myo Nyunt said.

Another shooting incident that occurred on Nov. 15 targeted the home of the chairman of Kyaukme township’s election subcommission. The official was not injured, though his home was damaged.

A year ago, three members of the SNLD party were shot and killed in the township.

Members of the Shan state government and other political parties attended Htike Zaw’s funeral on Sunday. The lawmaker-elect was later cremated.

“As long as there are elements who ignore the people’s choices and advocate armed violence, incidents like this will continue to occur,” said Shan state chief minister Lin Htut.

“We all need to work together across the nation to eliminate anarchy and the custom of domination by armed violence, and replace it with a custom of creating authority via people’s choices,” he added.

Lack of rule of law

The SNLD also issued a statement on Sunday denouncing the assassination, urging authorities to find and prosecute the killers and demanding that officials stop similar acts of violence in the region.

Thein Tun Oo, spokesperson of the opposition Union Solidarity and Development Party (USDP) said he was “deeply saddened” by the killing.

“This act is unacceptable in an era of multiparty democratic systems,” he said.

Mei Ohn Khine, secretary of northern Shan state’s Ta’ang National Party, said the lack of rule of law in the troubled territory is the reason why such killings occur.

“There is a lack of rule of law in the area,” he said. “The main problem is the lack of peace in the region. This is the main reason why things like this keep happening.”

Political analyst and writer Than Soe Naing said Htike Zaw’s murder likely sprang from resentment over the outcome of the elections.

“But we need to investigate whether these resentments are personal or if they implicate the political parties that contested there,” he said.

“All the parties need to set forth their viewpoints with regards to this act so that the public will have no doubts about their motives,” he said.