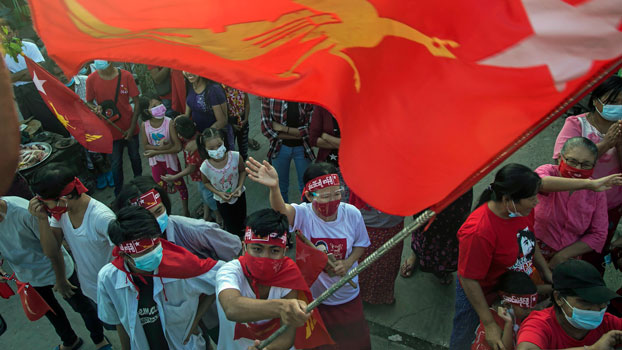 On Friday, Myanmar reported 76,414 total confirmed cases, including 1,532 news ones, and 1,695 fatalities since March, according to the Ministry of Health and Sports.

During a speech on Monday, the state counselor said that the infection rate likely would increase as a result of gatherings of political supporters and voters after the elections, which the ruling National League for Democracy won by a landslide.

“As we all know, there have been large gatherings after election day,” said Aung San Suu Kyi, who also chairs the Central Committee on Prevention, Control and Treatment of COVID-19. “The chances of infection are high whenever there are large crowds.”

The following day, however, Aung San Suu Kyi met with health, investment, and international cooperation ministers and the rest of the COVID-19 committee to discuss relaxing COVID-19 restrictions based on infection rates in townships, as well as resuming domestic flights and other travel, reported the online journal The Irrawaddy.

The number of COVID-19 cases had dropped dramatically in past weeks to about 1,000 new cases a day, but then rose to nearly 1,600 a day following the election celebrations, according to health officials.

The same officials now are warning that the virus is more likely to spread in the country due to changes in the weather with Myanmar’s cool season between November and February.

“Most viral infections occur in cold climates, so people are more susceptible to the disease during the winter months,” said Dr. Kyaw Swar Oo, a physician tracking the spread of the coronavirus.

On Thursday, the Health Ministry urged people to avoid gatherings and unnecessary trips and to stay at home. The ministry also said authorities are monitoring the situation to determine if new infections have resulted from virus outbreaks amid crowds that gathered after the elections.

“We have learned from the example of other countries,” said Dr. Myat Wunna Soe, the ministry’s deputy director general. “If people comply with the order to stay at home for two weeks, then the number of cases will go down. That’s why, the ministry issued the stay-at-home order.”

The Myanmar government has imposed stay-at-home orders in about 75 townships in Bago, Ayeyarwady, and Mandalay regions and in Kachin and Mon states, with only essential businesses allowed to remain open, according to The Irrawaddy. The order also applies to all of Yangon region and Rakhine state, both of which saw infection rates surge beginning in mid-August.

Myanmar, a country of 54 million with an underdeveloped health care system, has roughly one doctor for every 3,000 people compared to the world average of about 1.6 physicians per 1,000 people, according to World Bank data for 2017, the most recent year for which information is available.

The country could find itself in dire straits if the current rate of infections continues to grow and its strained health care facilities are unable to handle a further influx of patients.

“When the first COVID-19 cases were found in Myanmar, people were pretty terrified and stuck to staying at home,” said Dr. Htet Htet Win, who is trying to educate the public online about health issues, including the coronavirus.

“Now that people have gotten used to the situation, they are no longer complying with the restrictions and are gathering more often,” the physician said.

Lockdown measures and mandatory quarantines mean that Myanmar’s economy, like other economies in Southeast Asia, has taken a hit with many businesses struggling to stay afloat. Some areas that depend on tourism have seen local jobs all but disappear.

In late October, the Ministry of Foreign Affairs extended COVID-19 travel restrictions until the end of November, while domestic flights have been banned since Sept. 11.

Tourism in Bagan, an ancient city and a UNESCO World Heritage Site in Mandalay region, has ground to a halt since March, when Myanmar announced its first confirmed COVID-19 case.

Myo Sat San, who made his living as a tourist car driver in the town’s archaeological zone, said that as much as 80 percent of the local population relies on the tourism industry for their livelihoods.

“I’ve seen that the number of COVID-19 cases has been rising recently,” he said. “I hope that the tourists will return in the winter months and that businesses will recover. Now, I don’t see it happening.”

Dr. Zaw Myint Maung, chief minister of Mandalay region, said all residents should remain at home to avoid the spread of COVID-19 and possible infections.

“I encourage the people to comply with the stay-at-home orders — not just for yourself,” he said. Keep in mind that it is also good for your family, your town, and your community.”

As Myanmar struggled with the virus, nearby Vietnam has appeared to fare much better, thanks to its early efforts to control the spread of the virus and to allow businesses reopen.

As of Friday, the country recorded 1,305 confirmed COVID-19 cases, with only one new case, and 35 total fatalities, according to government officials.

But Vietnam’s National Steering Committee on COVID-19 Prevention and Control told state-owned media on Thursday that roughly 550 people returning to the country from abroad had tested positive for the virus since a second outbreak began on July 25.

Vietnam has maintained quarantine rules for those who enter the country from pandemic-hit areas around the word. As of Friday, more than 17,000 people had been quarantined in government-controlled facilities or at home.

Authorities in Quang Nam province in central Vietnam have asked residents to wear protective face masks in public amid a COVID-19 outbreak in the community.

With a population of less than 2 million people, Quang Nam is known for its strong fisheries sector, its tourism industry, and the Chu Lai Open Economic Zone, Vietnam’s first coastal economic zone designed to attract both domestic and foreign investors.

Provincial leaders on Friday asked localities to plan for possible new COVID-19 cases during the cool season, according to a local media report. A new provincial order requires police to step up their monitoring of import-export activities as a measure to prevent the spread of the virus.