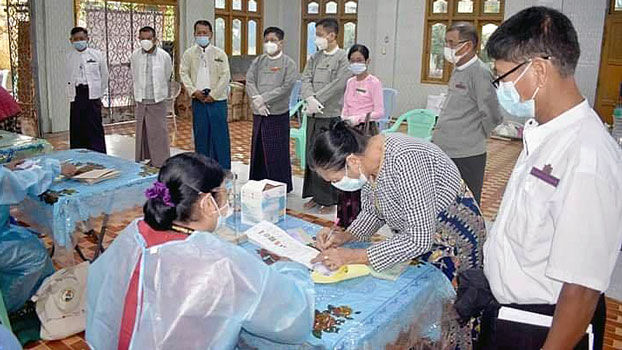 Myanmar’s Rakhine state has emerged as a problem area in the run-up to national elections on Sunday, with voting cancelled in conflict zones, a raging COVID-19 pandemic, disenfranchisement of Muslim Rohingyas, and a ballot scandal.

On Friday, the last day of the two-month-long political campaign period, some 300 ballots submitted at one polling station during early voting were declared null and void after election officials discovered check marks for a local party already stamped on 14 ballots.

A voter in Sittwe township’s Amyint Kyun village noticed the preprinted check marks next to the name of the two-year-old Arakan Front Party (AFP) and called the fraudulent ballots to the attention of local election officials.

Members of the state election subcommission and local political parties met later in Rakhine’s capital Sittwe and decided to cancel all the ballots in the village’s ballot box and allow voters to complete new forms. They also agreed on firing the chairman and secretary of the village’s administrative committee.

“We want to ensure that the election is fair and just. That’s why we decided to cancel all the votes in that ballot box,” said Tun Tun Aung, a candidate from the Arakan National Party (ANP), who attended the meeting.

Though the AFP objected to the plan for voters to recast ballots, members of the ANP, the ruling National League for Democracy (NLD) party, and the opposition Union Solidarity and Development Party (USDP) backed the move.

Election authorities say they will investigate the incident after Nov. 8, when the nation of 54 million people goes to the polls to choose among some 7,000 candidates from more than 90 parties vying for more than 1,100 seats in both houses of the national parliament and in state and regional legislatures.

Sittwe township has more than 101,000 registered voters and 108 polling stations, with 14,800 voters who are 60 years old or above allowed to cast early votes. 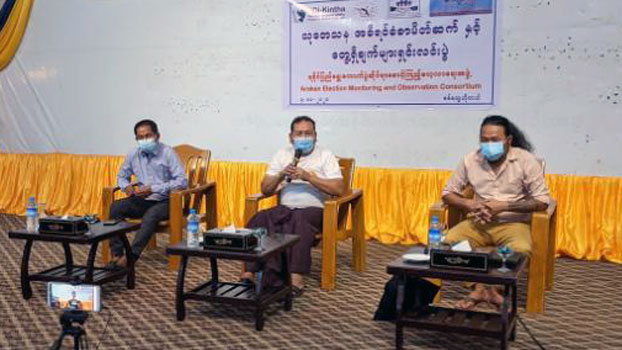 Members of the Arakan Election Monitoring and Observation Consortium, a group of NGOs in western Myanmar's Rakhine state, hold a press conference in the state capital Sittwe, Nov. 4, 2020. Credit: RFA

More doubts are being raised as to whether the country will be able to hold genuinely free and fair elections, given the cancellation of balloting in several ethnic areas experiencing unrest and armed conflict.

Decisions by Myanmar’s Union Election Commission (UEC), which oversees voting, to suspend Nov. 8 elections in dozens of townships, including in war-torn Rakhine state, without consulting local political groups have disenfranchised more than 1.5 million people out of Myanmar’s total 37.5 million eligible voters, according to Human Rights Watch.

A report issued Thursday by the Arakan Election Monitoring and Observation Consortium, a group of local NGOs, said the elections on Sunday will not be free and fair.

At a press conference in Sittwe the same day, members of the consortium appealed to election authorities to reverse the decision to cancel voting in parts of Rakhine state.

Based on surveys of political parties, candidates, the media, civil society groups, and local election subcommission members in a dozen townships, the report found that those running for parliamentary seats in Rakhine have not had a fair shot at campaigning because of an internet service blackout.

The Myanmar government originally ordered a suspension of mobile internet services in June 2019 in eight townships in Rakhine and in Chin state’s Paletwa township amid intensifying clashes between government forces and the rebel Arakan Army (AA). Authorities later lifted the restriction in Rakhine’s Maungdaw township.

The nearly two-year-old conflict has left more than 300 civilians dead and displaced an estimated 226,000 others.

“The candidates are campaigning on social media all over the country, [and] they have been publicizing what they will do for their communities when they get elected,” said the consortium’s Khaing Kaung San. “At the same time, the candidates from townships with internet shutdowns haven’t had the same opportunities.”

“We concluded that the 2020 elections would not be free and fair, even before the UEC’s announcement on Oct. 16,” he added.

National election authorities on Oct. 16 declared whole or partial cancellations in constituencies in Kachin, Karen, Mon, Rakhine, and Shan states, and in Bago Region, citing security concerns. They later said the decisions were based on recommendations by the government, the military, and the armed forces-controlled ministries.

Eleven days later, the UEC announced the suspension of voting in 94 village tracts in Chin state’s Paletwa township, which has seen fighting from the Rakhine conflict.

The consortium’s report also said that the internet service blackout has prevented voters in northern Rakhine from accessing information about the candidates and the election itself, with stay-at-home orders during the COVID-19 pandemic intensifying their isolation and the information cutoff.

Rakhine state has been one of Myanmar’s COVID-19 hotspots during a resurgence of the contagious respiratory virus in the country since mid-August.

The UEC has allowed civil society groups to conduct voter education programs, but the state election subcommission has barred them from doing so, said Kyaw Hsan Hlaing.

“Voters cannot get the information they need,” he said. “The candidates running for office cannot disseminate information about themselves to the voters due to COVID-19, the ongoing armed conflict, and the internet ban. Many voters have lost their voting rights.”

The report also noted the disenfranchisement of hundreds of thousands of Rohingya Muslims living in Rakhine, who are not allowed to vote in this election, though they could vote in a previous election a decade ago.

The consortium also said that the UEC’s decisions have diminished the credibility of its claim of impartiality because the Rakhine townships where voting has been suspended have traditionally supported the ruling party.

The fresh criticism comes on top of condemnation of the UEC and the NLD-led government on Thursday by military chief Senior General Min Aung Hlaing for what he said was poor handling of election preparations.

Soe Linn, a member of the consortium that issued the report on voting in Rakhine state, said civil society groups cannot monitor polling stations designated for military personnel or those conducting early voting.

Of 1.6 million registered voters in Rakhine state, only about 400,000 will be able to vote in the elections, according to the report.