Myanmar Military Chief Hits Out at Election Mismanagement Ahead of Vote 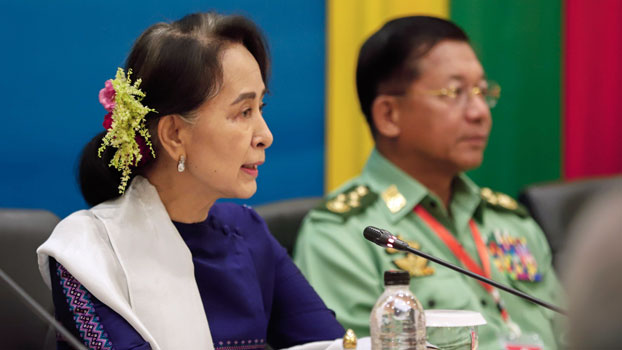 Myanmar’s powerful military chief has upbraided the government and electoral authorities days before Sunday’s vote, saying the civilian administration is responsible for “weakness and deficiencies” in poll management that could hurt the “image of the election.”

The nation of 54 million people, which emerged from harsh military rule a decade ago, goes to the polls on Nov. 8. Some 7,000 candidates from more than 90 parties vying for more than 1,100 seats in both houses of the national parliament and in state and regional legislatures.

The rare interjection by the military, which is guaranteed 25 percent of seats in national and regional legislatures under a constitution it wrote in 2008, came in a statement issued Monday by the office of Senior General Min Aung Hlaing that one analyst was a “very alarming” intrusion into domestic politics.

“Based on the experiences of the 2010 and 2015 elections, the coming 2020 election should have greater freeness and fairness. But weakness and deficiencies which were never seen in the previous elections are appearing now. They can have adverse impacts on the image of the election,” said the statement.

Min Aung Hlaing cited reports that the Union Election Commission, an independent body which oversees voting, had mishandled voter lists, botched ballot envelopes and boxes, and struggled to get political parties to observe election campaign rules set to conduct the vote during a resurgence of the COVID-19 pandemic.

“Although the Union Election Commission had over four years of preparation time for the 2020 election, there is much weakness even in arranging envelopes for votes and ballot boxes,” said the commander-in-chief.

“Negative outcomes were caused by the loose supervision and actions of the commission to enforce political parties to observe the rules and regulations for election campaigns that have started since 8 August 2020,” he said.

“The government has the complete responsibility for all the intentional and unintentional mistakes of the commission at its different levels,” said the statement, which said both parties are responsible for ensuring a free and fair vote on Sunday.

RFA tried repeatedly to contact Myanmar military spokesman Major General Zaw Min Tun for an explanation of the “intentional and unintentional mistakes of the commission” mentioned in the statement, but he was unavailable.

But Moe Zaw, a member of the Naypyidaw Election Subcommission, said the UEC has done everything in line with election laws, though it made an exception to allow senior citizens to cast advance votes to lessen their risk of catching the COVID-19 virus.

“During the pandemic, seniors 60 years old and above have been allowed to cast advance votes under a government decision,” he said. “This is not something covered in the election laws and bylaws, but it has been very crucial for the prevention of infections.”

“Except for this, all other activities have been done by the book, and everyone is working as much as they can to have a free and fair election,” he added. 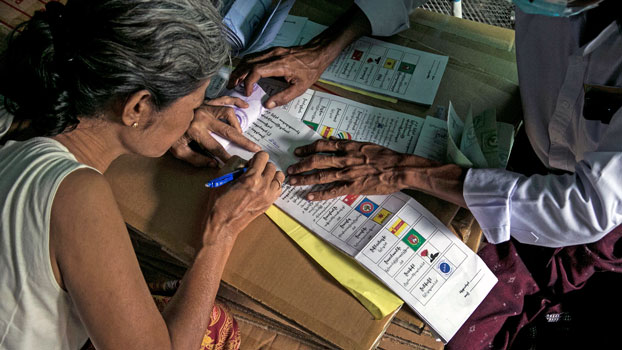 RFA emailed questions about the military’s accusations to Zaw Htay, spokesman for the President’s Office, but he had not responded by publication time late Tuesday.

Myo Nyunt, spokesman of the ruling National League for Democracy (NLD), rejected assertions that the UEC’s operational mistakes but they were not intentional as the military says.

“The suggestion that that ruling government has to take responsibility for the commission’s work is not compatible with the current political situation,” he said, noting that the military-controlled Ministry of Home Affairs also bears responsibility for mistakes with the ballots.

Nandar Hla Myint, spokesman of the army-backed opposition Union Solidarity and Development Party (USDP) said the military has exercised its rights under the 2008 constitution to step in to try to protect free and fair elections.

“The military has an obligation to preserve and safeguard the constitution [and] has a duty to arbitrate if there are violations of constitutional mandates,” he said. “That is a right granted in the constitution.”

“The military is now making these calls for the ruling government to oversee the work of the UEC and avoid a worst-case scenario in the country,” he said,

Writer Chit Win Maung said Monday’s blunt statements indicate that the powerful military — which ruled the country outright from 1962 to 2011 and retains control of the defense, home affairs, and border affairs — is inserting itself into politics a decade into the democratization process.

“But this is the first time the military has openly criticized and interfered in the government’s performance. This is very alarming,” he added.

“It can be assumed that as an organization responsible for security, it is concerned about instability caused by subsequent disputes after the elections,” he said. “But this has a profound impact on the politics because the military is giving its own assessment of the government’s performance at a critical time.”

Sai Ye Kyaw Swar Myint, executive director of the election watchdog group the People’s Alliance for Credible Elections (PACE), said the UEC must give clear instructions to all of its branches around the country to ensure the elections go off without a hitch.

“I want to encourage the UEC to provide training for officials at polling stations and members of the subcommittees,” he said. “As we have observed from their performance, these staffers will be able to efficiently manage the polling stations on election day only if they improve their capacities.”

“The UEC must act as quickly as possible in the remaining few days,” he said.

There have been widespread complaints about advanced voting, which normally lasts for 10 days and concludes a day before voting is held, such as missing signatures of polling station officials on ballots, fake stamps used for voting, and broken seals on ballot boxes.

There are reports that some election subcommission chairmen took ballot boxes to their homes, while other reports say that some of the boxes have been damaged by rats, said Nandar Hla Myint.

“If these ballot boxes are confirmed as being invalid, all the votes in the boxes will be canceled,” he said. “If this happens in USDP or other opposition party strongholds, then we can question the real causes of this issue. The UEC’s history is now tainted by this negligence.”

The NLD is seeking reelection after taking power from the pro-military USDP in the last national vote held in 2015.

The stiffest competition again will be between the NLD, which is fielding 1,143 candidates, and the USDP, which has put 1,129 candidates forward.