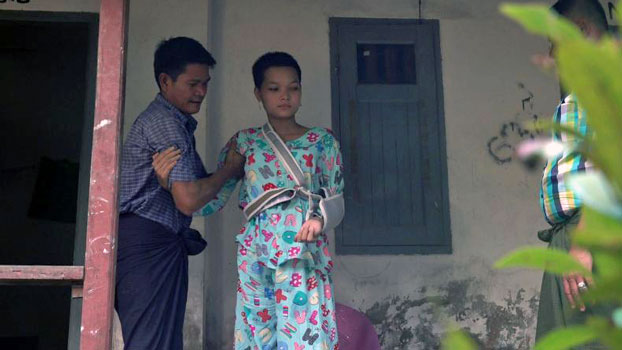 An ethnic Rakhine college student is making a slow but steady recovery from a head injury she sustained during an explosion amid armed conflict in western Myanmar Rakhine state that left her in a coma with apparent brain damage.

She is one of nearly 700 civilians who have been injured by fighting between Myanmar forces and the rebel Arakan Army (AA) that has raged in the state since late 2018. The hostilities have left more than 300 civilians dead and displaced about 226,000 others.

Hnin Yu Hlaing, 22, was released from Sittwe General Hospital in Rakhine’s capital on Oct. 26, though she remains unable to speak and must undergo physical therapy to regain her full range of motion in her left limbs. She has lost much of her memory from head wounds, one of which has left an artillery shell fragment still lodged in her head.

She can understand what others say to her and can walk a little without assistance, though her left arm and leg are slow to move and cannot sustain prolonged motion.

Hnin Yu Hlaing spent 46 days in the hospital — including two weeks in a coma — after shells slammed into her home in a village in Myebon township in early September. The northern Rakhine township has been one of the centers of the conflict, with civilians killed or maimed by crossfire from government troops and rebel soldiers.

Hnin Yu Hlaing’s parents, who now live with the young woman in a makeshift displacement camp at the Alo Taw Pyay Buddhist monastery compound in Sittwe, said they struggled with despair at the thought that their only child might not survive her injuries.

“I am so glad my daughter woke up,” said the woman’s father, Maung Phyu Thee.

“We could relax only after we learned that she would live. When she was in coma, we were in misery. We couldn’t eat well. Only now are we back to normal.”

On Sept. 8, four artillery shells fell on Myebon’s Nyaung Khat Kan village, where the family used to live, and another two hit just outside the community. Two of the four shells landed inside the family’s compound. Hnin Yu Hlaing suffered critical injuries to her head and body.

“We’ve got only one child,” said Maung Phyu Thee, recalling when he and his wife saw their daughter lying unconscious in the hospital for 15 days.

“We didn’t have any reason to live if she didn’t survive,” he said. “She was our only hope.”

Though Hnin Yu Hlaing survived the blasts, four other villagers, including two children, died during the attack, and 10 others were injured.

At least 52 women and girls have died, and 201 have been injured, as a result of the fighting to date.

Following the incident, UNICEF issued a statement that children should not be targeted in armed conflict, while Thomas Andrews, the U.N.’s special rapporteur on the situation of human rights in Myanmar, called for an immediate end to military assaults on Rakhine villages and decried the mounting toll of child casualties in the war. 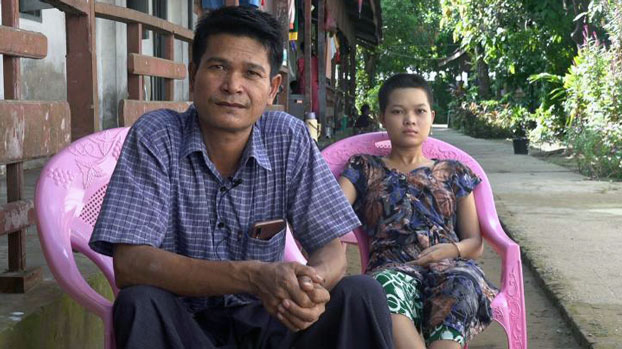 High hopes for her daughter

Hnin Yu Hlaung, a history student, was in the final year of her studies at the Yangon University of Distance Education when she was injured in the conflict.

Now her parents do not know if she will be able to complete her studies.

Her mother, Sein Than Yin, said she has high hopes for her daughter.

“Only after she woke up did I feel hopeful again,” she said. “Now, I want her to be able to speak again. I want her arm to recover enough so she is able to move normally like before. She was still doing her college studies. I want her to be an educated person.”

A volunteer group helping villagers injured in the war had arranged for Hnin Yu Hlaing to be transported and admitted to Sittwe General Hospital in time for doctors to save her life.

But Hnin Yu Hlaing still needs an operation to remove the shrapnel from her head, said the group’s Ye Thaw Htoo who helped transport her to the medical facility.

Doctors in Sittwe performed surgery on Hnin Yu Hlaing for the injuries she sustained, but she will have to travel to Yangon at a later date for another surgical procedure to take out the shell fragment, he said.

In the meantime, Hnin Yu Hlaing continues to do physical therapy exercises on iron bars provided by donors to strengthen her body at the displacement camp where she and her parents are sheltering temporarily.

The fighting in northern Rakhine state is technically still on, but has abated somewhat following Myanmar’s Nov. 8 general elections, which had been cancelled in townships in the conflict zone.

Since then, the AA, which has been declared a terrorist organization by the government, has called for a by-election before the end of the year in areas where voting was suspended and has offered to extend a unilateral ceasefire until Dec. 31.