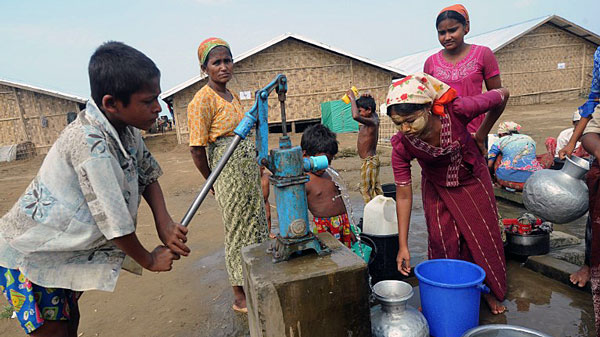 Rohingya Muslims collect water from a well near their barracks at the Bawdupah IDP camp on the outskirts of Sittwe in western Myanmar’s Rakhine state, May 18, 2013.
AFP

Myanmar’s confinement of 130,000 mostly Rohingya Muslims in dire and oppressive conditions in open-air camps since 2012 compounds the country’s crimes against humanity against the ethnic minority and amounts to “apartheid,” according to a report issued Thursday by Human Rights Watch.

The Muslims were burned out of their homes and forced into the camps following communal clashes with Rakhine Buddhists in June and October 2012 in the state capital Sittwe and in central and southern parts of Rakhine state. The violence left as many as 280 people dead and made the 130,000 homeless.

The findings of the 169-page report titled “An Open Prison without End’: Myanmar’s Mass Detention of Rohingya in Rakhine State” are based on interviews conducted since 2018 with more than 60 Rohingya and Kaman Muslim internally displaced persons (IDPs,) and humanitarian staff working in 24 camps and camp-like settings in the state.

New York-based HRW found that the interned Muslims suffer from malnutrition, serious health problems, a lack of education, no freedom of movement or access to livelihoods, and extortion by security personnel at official checkpoints. Those who are caught outside the camps are subject to torture and other abuse by security forces.

“Both acts of violence and other apparently discriminatory actions — such as the deprivation of Rohingya’s access to livelihoods or food — may be considered acts of persecution that amount to crimes against humanity,” the group said in a statement accompanying the report.

HRW also analyzed more than 100 internal and public government, U.N., and nongovernmental documents and reports that show what it calls “the calculated refusal by the national and Rakhine state governments to improve freedom of movement or living conditions in the camps, including denying adequate space or suitable land for camp construction and maintenance.”

“Human Rights Watch determined these oppressive conditions amount to the international human rights crimes against humanity of apartheid, and persecution,”  the statement said. “This finding of apartheid is our first such finding anywhere in the Asian region.”

HRW cited a 1973 U.N. treaty that defines the crime of apartheid as following racial segregation and discrimination policies similar to those once practiced by South Africa.

HRW called on the government to urgently end the arbitrary and indefinite detention of the Muslims, and said that apparent measures to shut down the camps “appear designed to make permanent the segregation and confinement of Rohingya and several thousand Kaman Muslims” since the 2012 displacement.

“The Myanmar government has interned 130,000 Rohingya in inhuman conditions for eight years, cut off from their homes, land, and livelihoods, with little hope that things will improve,” said HRW researcher Shayna Bauchner, who wrote the report.

“The government’s claims that it’s not committing the gravest international crimes will ring hollow until it cuts the barbed wire and allows Rohingya to return to their homes, with full legal protections,” she said.

HRW argues that the ethnic cleansing and internments that began in 2012 laid the groundwork for Myanmar military-led atrocities against Rohingyas living in northern Rakhine state in 2016 and 2017, which it says also amounted to crimes against humanity and possibly genocide.

“The Myanmar government’s actions against the Rohingya since at least 2012 can be considered both a widespread and a systematic attack against a civilian population. Many of their actions reflect state policy,” said the HRW statement.

The crackdown in October 2016, in response to a raid on three border guard stations by local Rohingya militants who killed nine officers, displaced about 90,000 Rohingya, most of whom fled to neighboring Bangladesh where they are living in massive refugee camps.

The larger August 2017 crackdown, in response to Rohingya militant attacks on 30 police posts and an army base, was far more brutal, leaving thousands of Muslims dead, subjecting others to mass rape and torture, and driving more than 740,000 others into Bangladesh. Satellite images showed widespread burning of Rohingya villages.

Myanmar's government did not immediately respond to RFA requests for comment on the HRW report. National leader Aung San Suu Kyi and her government have consistently asserted that the Rohingya exodus was the result of a legitimate army operation to clear northern Rakhine of Muslim insurgents who carried out the deadly attacks on police outposts. 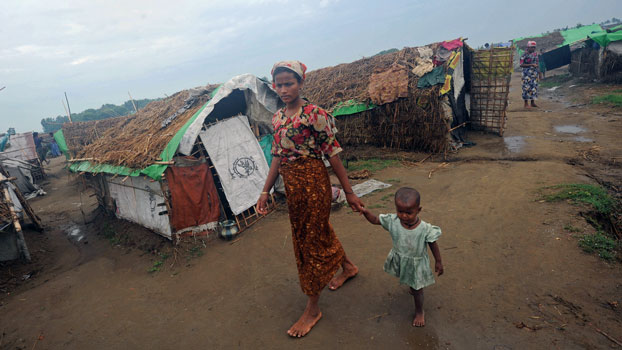 A Rohingya woman and her child walk in front of tents at the Mansi IDP camp on the outskirts of Sittwe in western Myanmar's Rakhine state, May 15, 2013. Credit: AFP

Reports issued in March and August 2017 by an advisory commission led by late former U.N. chief Kofi Annan to help resolve the religious and ethnic divisions in the unstable region recommended that the Myanmar government shut down the Muslim IDP camps and relocate the Rohingya to other settlements.

In response, the government said in April, following the release of the first report, that it would begin closing the camps.

In November 2019, the government adopted a “National Strategy on Resettlement of Internally Displaced Persons and Closure of IDP Camps,” which entailed building permanent structures near current camp locations for the Rohingya.

But the process has further entrenched segregation and denied Rohingyas the right to return to their land, rebuild homes, obtain work, and reintegrate into Myanmar society, HRW said.

“Nobody has been able to return, nobody has been compensated,” HRW quoted a Kaman community leader as saying. “We keep asking, even still we are asking the government for our land.”

In the three camps declared “closed,” there has been no notable increase in freedom of movement or access to basic services.

None of the Rohingya interviewed indicated that they believe their situation in Myanmar will change, HRW said.

“I think the system is permanent,” said a Rohingya woman quoted by HRW. “Nothing will change. It is only words.”

Muslims confined to the IDP camps are highly vulnerable to the COVID-19 pandemic, which is hitting Myanmar with a severe and widespread second wave, HRW said.

Rakhine state, with a population of 3.2 million and numerous refugee camps, is a coronavirus hotspot with 1,852 confirmed cases as of Wednesday, or nearly nine percent of Myanmar’s total 21,433 cases.

The northern part of the state where hundreds of thousands of Rohingya still live also is plagued by ongoing armed conflict between Myanmar forces and the rebel Arakan Army (AA), which is fighting for greater autonomy for ethnic Rakhines in the state.

Rohingya villages have been caught in the combat zone, with adults and children killed in shootings or mortar shellings by Myanmar soldiers.

Most Rohingya have been barred from voting in the Nov. 8 general elections in Myanmar because they cannot meet onerous citizen requirements, following policy changes that disenfranchised them decades ago. They are often referred to derisively as “Bengalis” and branded illegal immigrants from Bangladesh.

Myanmar’s 1982 Citizenship Law states that only members of the “national races” who settled in Myanmar before British colonial rule began in 1824 were entitled to citizenship. The Rohingya were excluded from the 135 officially recognized ethnic groups, which then left them without full citizenship and the right to vote.

HRW urged international donors, humanitarian agencies, and the U.N. to take collective against the “apartheid system” in Myanmar by forcing the country to meet human rights benchmarks or face losing funding for infrastructure and development projects in Rakhine state.

The rights group also urged the Myanmar government to stop the process of IDP camp closures until it holds consultations with affected communities and crafts an updated strategy to be carried out according to international standards.

“Aung San Suu Kyi’s government and the military have deliberately created and maintained oppressive camp conditions to render life unlivable for the Rohingya,” Bauchner said in the statement.

“Foreign governments and the U.N. need to reevaluate their approach and press Myanmar to provide the Rohingya with safety and freedom, while holding accountable the officials responsible for this apartheid regime,” she said.

Rohingya and others in Rakhine said conditions have not improved enough to resettle refugees among their former neighbors.

"If they return to their former homes, it could be problematic because it will still take time to build trust between two communities," said Khine Kaung San from the Wun Lark Foundation, a Sittwe-based development group.

Bangladesh's foreign minister declined to comment on the report, but former Bangladeshi Foreign Secretary Md. Touhid Hossain agreed with HRW that what Myanmar is doing in Rakhine is "no doubt apartheid.”

“According to the U.N. laws, these types of practices are tantamount to crimes against humanity," he told BenarNews, an RFA-affiliated online news service.