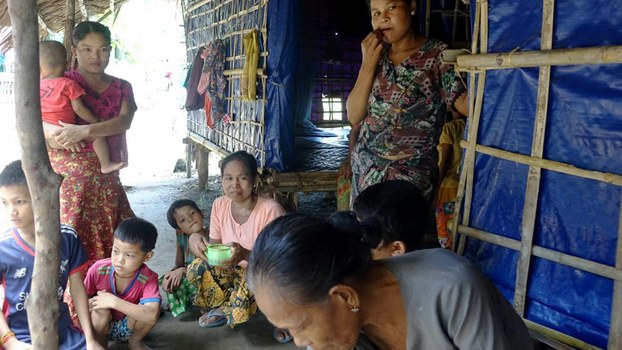 Myanmar villagers, who fled from conflict between the Myanmar military and the Arakan Army, arrive at a temporary refugee camp at a monastery in Sittwe, western Myanmar's Rakhine state, June 29, 2020.

Artillery fire from Myanmar military patrol boats and fresh burnings of villages along a river in Rakhine state this month have added at least 17,000 refugees to the ranks of internally displaced civilians, aid workers in the western state said.

Armed conflict that erupted in late 2018 between Myanmar forces and the Arakan Army (AA) in parts of Rakhine and neighboring Chin state has now displaced more than 220,000 civilians, according to an estimate by the Rakhine Ethnics Congress (REC), a local NGO.

The conflict, exacerbated by the coronavirus pandemic that has resurged in Rakhine, has killed nearly 300 civilians, and injured more than 640 injured in northern Rakhine state and in Paletwa township of Chin state, according to an RFA tally.

This month’s surge of internally displaced persons (IDPs) who abandoned their homes to escape fighting came from a half-dozen villages along the Kaladan River in Rakhine’s Kyauktaw township, which endured shelling and “clearance operations” from Myanmar navy patrol boats, volunteers and villagers said.

“They arrested and beat the villagers. They burned our houses. We don’t have reasons to return to our villages,” said Maung Mae Sein, a villager who had fled his home and taken shelter with more than 2,000 people at the Maha Muni pagoda compound and other makeshift relief stations.

“Whenever they are in the area, they ravage our village. They robbed our house. They gathered the villagers for interrogations. If they are not satisfied, they beat us. People are too scared to live there,” he added.

Tallying some 800 other recent refugee arrivals, he added: “We are preparing to build temporary tents for the refugees tomorrow, depending on the donations we receive.”

The abbot said over 900 people taking shelter in rest houses in the pagoda compound are relying on government aid of rice rations for two weeks as well as other private donations.

In a repeat of a military tactic seen in Rakhine in recent months, two villages in Kyauktaw township were burned on Sept. 3, sending more than 1,000 people fleeing for shelter.

“In Kyauktaw, civilians from two villages, Phaya Paung and Taungpauk, have fled their homes as the military burned down the houses,” said Zaw Zaw Tun of the REC relief group.

“Villages located along the Kaladan River are now constantly attacked by the navy vessels patrolling the river. The attacks have killed and injured several local civilians, so the people from these villages are fleeing their homes,” he said.

“The same thing is happening in Rathedaung. All in all, I estimate there are between 17,000 and 20,000 new IDPs from these townships this month alone,” added Zaw Zaw Tun.

He also rejected the witness accounts that military vessels on the Kaladan River had fired artillery at the villages.

Rakhine state government spokesman Win Myint said the state administration in Sittwe was negotiating the provision of assistance to the IDPs.

“It is true these people have fled their homes. We need to make accommodations for their stay. We also need to provide food for their well-being,” he added.

On Monday, as the U.N.’s human rights chief issued a report in Geneva saying that the army’s actions against civilians — airstrikes by fighter jets, helicopter and heavy artillery attacks, and ground battles in more densely populated areas — could constitute war crimes.

“Tatmadaw tactics have shifted, with periodic reliance on airpower against the Arakan Army, but in some instances it appears that civilians may have been directly targeted,” the report said, using the Burmese name for the military, Myanmar’s most powerful institution.