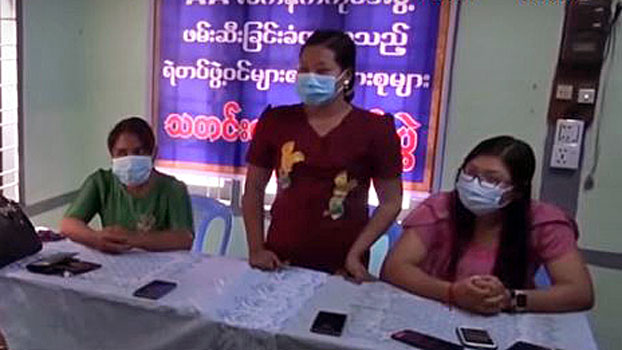 The relatives of police officers and soldiers taken as prisoners of war by the Arakan Army in Myanmar's northern Rakhine state call for their release at a press conference in Mandalay, Aug. 17, 2020.
RFA video screenshot

The families of 11 police officers and military soldiers detained by the rebel Arakan Army in western Myanmar’s Rakhine state pleaded for the release of their loved ones on Monday, saying they have heard no information about the men and are suffering economic hardship.

The Arakan Army (AA) told RFA all detainees were being treated well and repeated the ethnic army’s stance that the government army must release detained ethnic Rakhines before the “prisoners of war” can be freed.

The detained police and troops were captured in a pair of dramatic raids by the AA in two townships at the center of the 20-month conflict in Rakhine, where the armed force is fighting for autonomy for its ethnic group in their historic homeland on the Bay of Bengal in western Myanmar.

The AA attacked the Thazin Myaing police outpost in rural Rathedaung township in late May, capturing six policemen and three of their family members, and resulting in four deaths, the Myanmar military and local residents said at the time. The AA later released the two women and a child.

In late October 2019, the rebel army seized nearly 60 passengers aboard a ferry near Buthidaung township, including police officers and Myanmar soldiers.

Some escaped during a helicopter attack, while the AA later released the civilians. However, some of the police officers and soldiers are still being detained.

Their relatives, who held a news conference on Monday in the central city of Mandalay, said they have not heard any news about the abductees for nearly 10 months and requested their immediate release.

They also said they are suffering financial hardship because their husbands are not receiving their salaries while they are in the hands of the AA.

“We haven’t heard any news about my son yet,” said Tin Tin Nwet, mother of one of the men who is being held.

“We were surviving on his salary when he was serving as policeman, but we are in trouble now,” she said. “We want state leaders to know about us.”

Pyae Pyae Nyein, the wife of policeman Aung Tun Thu who was detained during the AA’s attack in the Thazin Myaing police outpost, also said her family is having difficulties making ends meet.

“As he is the head of family, we all depend on him,” she said. “Now, we are having difficulties surviving. We don’t want to be ignored and we want the truth about them. We want them to get back home safely.”

Shwe Zin, one of the two women the AA released following the attack on the police outpost, said that rebel soldiers told them that they would free their husbands after talking with authorities, but that didn’t happen

“We haven’t heard any news about them since then,” she said.

Thae Ei Zar, the wife of Police Captain Zaw Thu, said her family wants to know whether the police officer is still alive.

“We haven’t received his salary since he was detained,” she said. “We want to know whether he is still alive or not.

AA spokesman Khine Thukha told RFA that he could not say exactly how many prisoners of war the force is now holding because it is a security issue.

“We have been taking good care of all the prisoners we have, such as prisoners from fighting and others detainees because they are related to the police and the military,” he said.

“We have already said repeatedly in our statements that we will release the prisoners if the government army releases the ethnic Rakhine whom the military has detained, although they are innocent.”

RFA could not reach Myanmar military spokesman for comment.

Fighting between the Myanmar military and the AA since December 2018 has left dozens of civilians dead and displaced about 200,000 others.