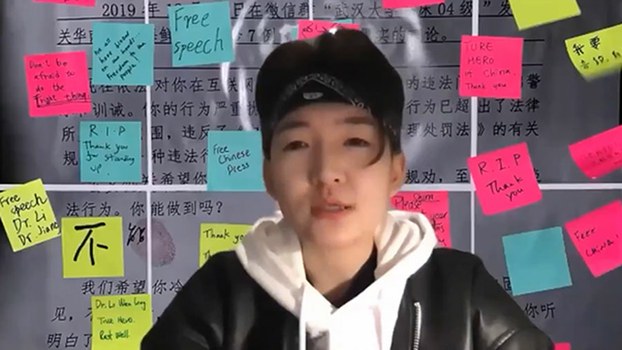 The Australia-based Chinese feminist known by her social media nickname @HorrorZoo, who was born after June 4, 1989 but has tried to raise awareness of the Tiananmen massacre in an undated photo.

Born several years after the People's Liberation Army (PLA) killed unarmed civilians on the streets of Beijing on June 4, 1989, an Australia-based Chinese feminist widely known by her social media nickname @HorrorZoo, talks to RFA's Mandarin Service about how she first became aware of the Tiananmen massacre in spite of years of official silence on the subject and heavy censorship of history:

RFA: When was the first time you learned about June 4th? How did you feel at the time?

HorrorZoo: Probably the first time I went over the Great Firewall when I was in high school. I think I used Freedom Gate software. I felt very shocked and angry after watching the footage that showed the truth about June 4. But I didn't feel very surprised. I have always been quite rebellious, ever since I was a kid. It just confirmed the impression I already had of the [ruling] Chinese Communist Party. It just convinced me that the views I had held since I was a kid were correct, and it also aroused in me a sense of resistance. If I'd been on Tiananmen Square back then, I would have been a student leader too.

RFA: Why did you have a fairly clear understanding of the Chinese Communist Party from such a young age?

HorrorZoo: My family is actually very pro-communist. My dad is a scholar of party history, Xi Jinping Thought and Marxism-Leninism. Now he is very opposed to [what I do]. But I have had a kind of bystander mentality in my own family from a young age. For example back when they were going after the Falun Gong and it was all over the news, I felt privately that there was something wrong. I knew some Falun Gong practitioners and they weren't bad people, and yet they were detained.

You don’t even need to get through the Great Firewall. There are many small examples of this everywhere, and people understand that there are many injustices in the system. I went to visit migrants in Beijing before the authorities drove them out of the city, and they had no heating, running water or electricity. The kids were using flashlights to do their homework, and they were made to leave so fast, with the state security police patrolling outside. This is what happens to the lowest-status people in China.

If you are a person of conscience, you will find a lot of darkness if you come into contact with real people, and you will naturally oppose [the political and financial elite]. It's a matter of conscience rather than a choice.

RFA: Many young people tend to see the image of the Tank Man and the Tiananmen protests as stylized images of distant memories. What does it mean to you, in essence?

HorrorZoo: If you want a struggle for democracy, you have to use some symbols to inspire most people. June 4, 1989 was a very brutal massacre in the history of the Chinese Communist Party. It's possible to get large numbers of people to attend a memorial event even after such a long time. But it's difficult to unite younger people after so many years of authoritarian rule. Something in the narrative needs to change. It needs younger people to join, bringing new ideas, and different actions to make it live again.

I think younger people tend to be more rebellious. The impact of June 4 on me was a kind of political enlightenment around protest. I went on to have a more direct experience of it when I took part in the Hong Kong protests.

RFA: How did the Hong Kong anti-extradition movement affect your
response to June 4?

HorrorZoo: After I went to Hong Kong, I discovered that revolution is really possible. I can see how the revolution happened. There is a sense of reality that joins everyone together, and millions of people take to the streets. There are also more practical considerations, such as how to escape when being chased by police, how to set up roadblocks, and protect yourself against tear gas.

RFA: What was your experience of commemorating June 4 online with [former Tiananmen student leader] Wang Dan, and others.

HorrorZoo: The leaders of the 1989 protests were very brave to take to the streets. They actually felt that they were the masters of their own country, and that they had a duty of make sacrifices for the future of that country. At the commemorative meeting, they were talking about how, when someone suggested that the army might crack down on them, fire at them, the students said: "How can the people's army fire on the people?"

Many young people today may also be very enthusiastic, but they become cynical when they start to grasp the true face of authoritarian government. So there's a general atmosphere of white terror. Around 80-90 percent of my anti-government friends suffer from depression. Most of them are taking medication for it, as well as a kind of political apathy. We are living in very fragmented times. They need to force themselves to conform to the so-called current reality, and do what their parents want them to do.

If young people lack a sense of identity, they will be easily led by the Communist Party narrative. The Chinese Communist Party will deceive them. They say that Chinese people will only have status and respect from others when their country is strong, so they have created problems with the United States, and confrontation in the bilateral relationship. So everyone naturally thinks that even if the leaders aren't very good, they have to stay strong for the motherland.

But this narrative is fundamentally wrong. There are very few 'little pink' extreme nationalists. Most people are in a passive state where they lack the capacity to think critically, so they just swallow the [government's] narrative.

RFA: You once said that the real brainwashing isn't that the Communist Party forces people to believe certain things, but that it changes the way they are said in Chinese, and thereby changes the way Chinese people think.

HorrorZoo: For children, this has caused a layer of separation and a kind of emotional deprivation. At the national level, it may also lead to collective trauma. There is also the violent language of the Cultural Revolution. For example, if a child makes a small mistake, he will use particularly intense language [to describe it].

Also, many people change their [natural] language habits on the Chinese internet so as to avoid crossing a line, so they say something really obscure. They want have something they really want to express, but they have to change their language into something very strange, including on WeChat groups. After that sort of thing goes on for a long time, narratives are destroyed and language and logic break down.

RFA: It seems from reading your Twitter that your father has been playing lobbyist for the Communist Party, asking you to admit your mistakes and go back to China.

HorrorZoo: My dad actually lied outright to me after that. He started reminiscing about old feelings, saying that he hadn't had enough contact with me when I was a child and that he wanted to climb Huangshan with me. We haven't traveled together in more than 20 years. I was really upset at the time.

He would sometimes say that he couldn't sing revolutionary songs with his friends any more, meaning that I had embarrassed him in front of them. He didn't like me having an impact on his hobbies, his status, reputation and income, but my future was less important to him. A few days ago, I found I couldn't get out of bed at all. There was something I couldn't put words to, stuck in my heart, causing a kind of trauma.

Many Chinese people are likely suffering from a kind of trauma now. The CCP has killed so many people since taking power ... It is even possible that the little pinks actually hated the Communist Party with a passion, but then displaced the trauma and it came-out a pro-communist. In the same way that some anti-gay [campaigners] are actually deep in the closet, because their fear of knowing that they are themselves gay makes them attack gay people all the more. So I can make a bold guess that there are some little pinks ... who are distorted by this kind of trauma and suffer from unspeakable pain.

RFA: Why do you continue to commemorate June 4 amid all this darkness
and danger?

HorrorZoo: I have a very strong desire to overthrow this regime, because I know how evil the Chinese Communist Party is. If didn't do this, I would fall into feelings of helplessness practise a kind of self-censorship, which would be harmful to me.

RFA: Do you find your efforts to be a bit sisyphean?

HorrorZoo: Many people in this era we are living in have no choice. They can either be a stone or be a person who gets crushed by a stone. I am able to be Sisyphus. This has been a kind of luck; an existential sort of luck.