On the Trail of a Forgotten Massacre 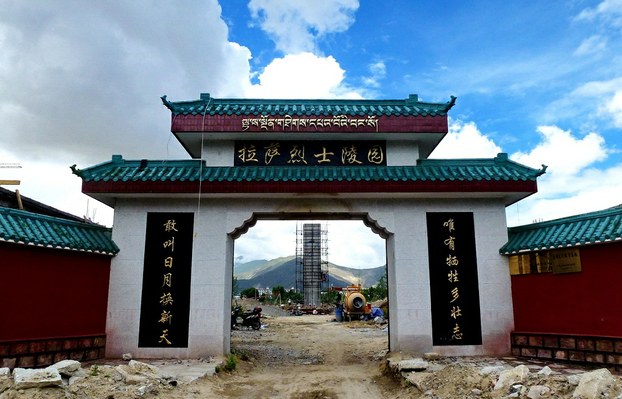 The gate of the Martyrs' Cemetery in Lhasa, July 2013.

Tsering Woeser, one of 10 Women of Courage honored by the U.S. State Department this year, has used her blog, Invisible Tibet, together with her poetry, historical research and social media platforms like Twitter to give voice to millions of ethnic Tibetans who are prevented from expressing themselves to the outside world by government curbs on information. Now based in Lhasa, Woeser continues to document Tibetan life under Chinese Communist Party rule in the Himalayan region. In a recent commentary she reports on a visit to the tombs in Lhasa of 12 Tibetans who died during the political turmoil of the Cultural Revolution (1966-1976):

One day in July, we went with to the "martyrs' cemetery," which is a long way outside Drepung Monastery. There are several large army camps nearby, directly under the command of the Tibetan airforce command base under the Chengdu military district, and other unknown military entities. Many years ago, this was lush forest that probably belonged to Drepung Monastery. Now, there are shiny high-rise apartment blocks going up nearby, as well as the barracks....

Of course, this is no ancient cemetery, but one that appeared in recent decades: "built in 1955, rebuilt in 1991," according to my Internet research. It holds the remains of 800 "martyrs" of the peaceful liberation of Tibet, the construction of the Sichuan-Tibet and the Qinghai-Tibet Highways, the counterinsurgency reforms, the self-defense against India, and the quelling of riots in Lhasa.

It has been designated an "educational grave site" by the Tibetan Autonomous Region government and the Ministry of Defense. In order to "cultivate the patriotic spirit," the Lhasa Martyrs' Cemetery is being turned into part of a "red tourism district," which, with an investment of 16.4 million yuan (U.S.$2.7 million) has been entered into a list of classic "red" tourist attractions.

According to the information, more than 2,000 graves are divided into ... four areas [for] martyrs, for leading officials, for general staff, and for those who died in the Cultural Revolution—a section located in the northwest corner of the martyrs' cemetery and holding the remains of those who died in the violence around Jokhang Temple.

Back then, there was a degree of unity between Han Chinese and Tibetans that had never been seen before.... People [discriminated] on the basis of class or political faction, and the ethnic issue didn't seem that important.

The fact that 12 Tibetan Red Guards aged 17-36, three female, nine male, were gunned down by the PLA outside Jokhang Monastery had nothing to do with ethnicity; it was a factional massacre of the Cultural Revolution. 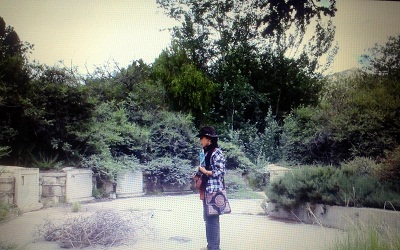 Tsering Woeser visits the Martyrs' Cemetery in Lhasa, July 2013. Photo courtesy of Invisible Tibet. Photo: RFA
As I walked through the overgrown weeds of the "Cultural Revolution" burial ground, I noticed that all the tombs are dilapidated, and the words carved on the tombstones have been blurred. I photographed them one by one. It was in this place 13 years ago ... that [my husband] Wang Lixiong encouraged me to write a Tibetan book of the Cultural Revolution, based on photos taken by my father, to set the historical record right.

Back then, you could still see that these tombs were well taken care of to start with, with tall walls around the 12 tombs and a small courtyard, with a flowerbed and a set of lights at the center of each. Each tomb was neat and compact, with a mosaic photo of the deceased in position.

But even back then, they were covered with rampant weeds, and livestock feed was piled up inside the cracked courtyards, and the inscriptions were unclear.

After seven years of research and writing, I discovered that this was one of the worst incidents of bloodshed in the history of the Cultural Revolution [which] swept through Tibet as it did through the rest of China, beginning with "cultural struggle," progressing to the irreconcilable factionalism of "armed struggle" between two factions that seemed pretty much the same: the "Rebel Headquarters" and the "Alliance."

The Jokhang Monastery was taken over by the Rebel Headquarters, who used all the rooms on the left-hand side nearest the street as a radio station, guarded by ... several dozen of their comrades. It is said that the fighting around the radio station was particularly fierce, so the People's Liberation Army came in to support the Alliance faction on June 7, 1968, opening fire and causing many casualties ... according to the "Account of the Chinese Communist Party in Tibet" published in 1995.

In fact, 10 people were killed inside the Jokhang Monastery during this massacre, and two in the street outside. Their average age was around 20, and they were all Red Guards.... People who heard it at the time said the machine gun fire went "da-da-da, da-da-da!" They also heard a hoarse announcement from the radio station, which said "the Rebel Headquarters...is under fire!"

The fighting was soon over, and there were even more injured than dead, all of whom were shoved any old how into carts and pushed to the gates of the Tibet Hospital.

This massacre that took place in the Jokhang Monastery caused an outcry in Lhasa, and the effects were even felt in Beijing.

Mao Zedong and Lin Biao criticized the factional infighting, the Tibetan military officers apologized to the "Rebel Headquarters," and some people were punished.

The "Rebel Headquarters" reported it in detail in its "Red Rebel News."

The 12 people who died were buried with great ceremony in the "martyrs' cemetery" in Lhasa, each in their own separate courtyard.

To begin with, they were considered martyrs, but one year later, it was said that they deserved to die. Their coffins were dug up and their corpses dishonored in the nastiest way.

The husband of a broadcaster injured in the fighting told me once in an interview: "When I saw them, they had already dug up five or six coffins, and the corpses were already decomposing down to the bones, raw with maggots and flies everywhere. Several of the bodies were claimed by the families, and others were reburied. Tibetans didn't bury people back then, but they insisted on reburying them anyway. They said they were martyrs, yet things came to such a tragic pass...." He could not say any more after that, because he was too choked with emotion.

Forty-five years on, it is said that no one ever pays homage to the 12 Red Guards who were killed. Even though Tibetans have no burial customs, the relevant departments could always visit them in honor of [the grave-sweeping festival of] Qing Ming.

But no reference to this event is ever seen in any public text; it seems that the phrase "Jokhang incident of June 7" has faded into oblivion. It's as if the entire incident never happened.

It makes one worry whether or not the cemetery will be here at all when they have built their "red tourism district," or whether the tombs of the Red Guards will have been bulldozed flat?

The Party-state would prefer that everybody just forget about brutal killings during clashes between the PLA and Red Guards such as that in Jokhang in June 1968. That's why there has been silence on the PRC Party-state's part.