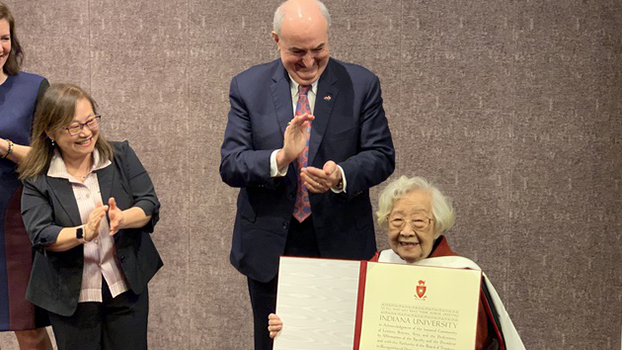 Chi Pang-yuan receives an honorary doctorate from the University of Indiana, Feb. 25, 2019.
RFA

Taiwan author Chi Pang-yuan, 95, was recently awarded an honorary doctorate from the University of Indiana. In her acceptance speech, the author of the bestseller "The Great Flowing River" spoke about the connection between her literature and growing up in wartime China, and about helping the now democratic island of Taiwan to play cultural catch-up after the disaster wreaked by the wars of the 20th century:

This is a very extraordinary day in my life. Fifty years ago exactly, in January, I left Bloomington in tears because, as a married woman with children, I had to come home and stop my academic studies. It was a regret I couldn't forget for years. But I had to compromise.

I received my entire education in wartime China. When the opportunity came for me to study abroad, I chose Indiana University, because at that time, in 1968, comparative literature was the best in the country. Indiana had nearly all the important masters in comparative literature from Europe. And as I had never had such a feast of study, I [did] my best in all the classes. I always felt that 50 minutes was too short for a class, and there was so much to learn, so much to absorb, so much to remember. It is a tradition that Indiana University has developed program after program, and we had the best time, and many people had their best time in the field.

And at the same time, well, it is a dream that I would help Taiwan to reach some of the aims I had learned in Indiana. So I and a few friends created our Comparative Literature Association in Taiwan. We had educated many young people in the understanding of foreign languages and literature, and we had so many meetings across the whole island. [Those were] very beautiful glorious days, inspired by my classes in Indiana. I can never forget. All those research works and the lists of books helped me my whole life. I cannot forget.

When I came back, I always hoped that we [would] make up all the years we lost in war, in disaster. I think Taiwan University has become one of the best research places for the Chinese people. Our English literature department is now producing creative people; creative writing and translation. I have tried to push some translation programs myself, and my friend Chiang Hu has tried to use Western ways [learned in Indiana] to look at Chinese drama. We have opened up many new territories. But you know, 50 years is a long time, a long time for people to develop new things.

I have lived a long life, but I never realized it was a long life, because I am so busy. I am busy nearly every day. I don't know. I wrote a book about my life, and especially in so-called old age I recorded my life and my loves, especially all the tradition of our struggle in the 20th century. I have lived my whole life in love, especially in the love of my parents, and to my parents, I wrote "The Great Flowing River," and I remember all my life, and the life that many of my friends lived with me.

Thank you for coming.