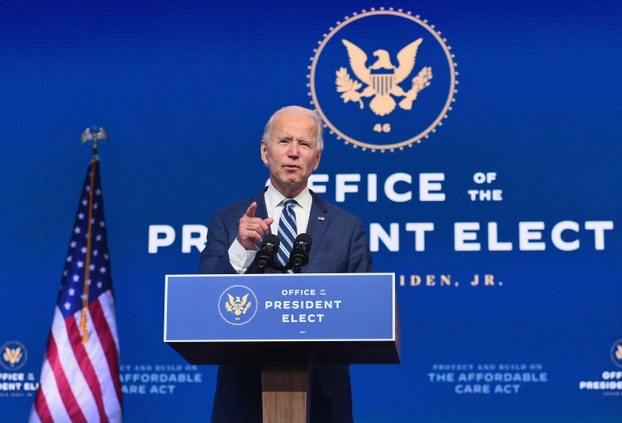 There will be more continuity than change in U.S. policy on the South China Sea under a Biden administration, statements made by the former vice president and his close advisors suggest, as a hawkish stance on China holds firm across both major political parties.

But experts also believe that under Joe Biden, Washington will pursue far more diplomatic engagement with the Southeast Asian claimants around the disputed waters, after four years of relatively little attention being paid to the region’s 10-nation bloc.

During the acrimonious election campaign, there was little attention on foreign policy, making it difficult to divine how either Biden or President Donald Trump – who has yet to concede the Nov. 3 election – would approach China’s increasingly assertive stance on its sweeping claims to the South China Sea in the next four years. Things should become clearer when a new National Security Strategy, an inter-agency review of policy, is released. That is due within 150 days after the new president takes office Jan. 20.

Carl Thayer, a professor at the University of New South Wales in Canberra, said he doesn’t expect a radical change in the U.S. approach -- characterized under Trump by increasing military maneuvers in the South China Sea, freedom of navigation operations, or FONOPs, and a more forceful diplomatic stance against China’s claims to disputed waters.

“The strategy will still be there, and the clear national interest won’t change because Trump is no longer president,” Thayer said at an online forum this week. He gave as an example the FONOPs, which are intended to challenge territorial and maritime claims unsupported by international law. Thayer said the FONOPs would continue, but a pace and scope that would be determined after the inter-agency review.

While U.S. is not a claimant in the South China Sea, roughly $208 billion in U.S. goods travel through those waters annually, according to the Washington, D.C.-based think tank, the Center for Strategic and International Studies. China’s militarization of the region has raised concerns about trade disruptions, while its coastguard ships and maritime militia regularly intrude into waters of other claimants, including the Philippines, which is a U.S. treaty ally. Washington is obligated to come to Manila’s defense if any of its military personnel are attacked in the South China Sea.

“My sense is that the Biden administration will continue with the military aspect,” said Amitav Acharya, a professor at American University in Washington, D.C., referring to FONOPs and military assistance programs the U.S. currently provides Southeast Asian countries. Both policies were in fact set in motion under the Obama administration that Biden served as vice president, although the pace of FONOPs and military exercises has accelerated under Trump.

“What Southeast Asians want is the U.S. to maintain the military balance, diplomatic engagement, and all kinds of economic aid and the like without ideological warfare or rhetoric against China” Acharya said.

Those wishes point to ways in which Biden’s approach may diverge from Trump’s.

Thayer predicted Biden’s policy approach to be more “orderly” and for his administration to step up high-level outreach to the 10-nation Association of Southeast Asian Nations, or ASEAN. Critics have accused the current U.S. president of a “transactional” approach and putting pressure on governments to pick sides between the U.S. and China.

“He will listen to ASEAN leaders and I think that will change the whole atmospherics of what’s occurring,” Thayer said. Five ASEAN members – Brunei, Vietnam, Malaysia, the Philippines, and Indonesia – have territorial claims or exclusive economic zones that overlap with China’s sweeping claims in the South China Sea.

During his eight years in office, then-President Barack Obama was a regular attendee of annual ASEAN summits. By comparison, Trump has not attended ASEAN summits for the past four years. He also has not appointed an ambassador to ASEAN.

But while the Trump administration’s high-level engagement with ASEAN has been criticized as half-hearted, it has taken a more muscular approach to asserting its support for Southeast Asian nations that contend with Chinese pressure in the South China Sea.

In July, Secretary of State Mike Pompeo announced a new shift in the U.S. approach to the South China Sea, calling China’s claims to certain submerged features and low-tide elevations “illegal” and refuting China’s expansive maritime claims, saying Beijing’s aggressive behavior was infringing on Southeast Asian nations’ rights to resources within their own waters. The U.S. previously did not formally take a position on any territorial claims in the South China Sea.

In addition, in August the Trump administration placed sanctions on Chinese state-owned enterprises it said were involved in illegal activities in the South China Sea. Some entities like the China Communications Construction Company were explicitly involved in dredging reefs and rocks into artificial islands.

But that led to U.S. pressure that made Southeast Asian governments uncomfortable. Speaking to ASEAN in September, Pompeo made the case to cut out the Chinese companies from regional economies. So far no ASEAN country has actually done so.

Meanwhile, in the United States, there appears to be both strong political and public support for a tough line on China. Some 73 percent of Americans now hold an unfavorable view toward the country, according to Pew Research.

In Congress, both Democratic and Republican lawmakers supported the Hong Kong Human Rights and Democracy Act of 2019, singling China out for its crushing of democratic institutions in Hong Kong. A bill placing harsher sanctions on China over its behavior in the South China Sea similarly also has co-sponsors and support from both parties.

Biden’s own opinion on China – and its paramount leader Xi Jinping – appears to have soured since he was last in office. Biden interacted heavily with then-vice president Xi under the Obama administration, but during a debate this February, he called Xi a “thug.” He also penned an article in Foreign Affairs in March calling China “a special challenge.”

“I have spent many hours with its leaders, and I understand what we are up against,” he wrote. “The most effective way to meet that challenge is to build a united front of U.S. allies and partners to confront China’s abusive behaviors and human rights violations.” He left open the possibility of working with China on areas “where our interests converge,” but stated plainly, “The United States does need to get tough with China.”

Biden’s advisors, and likely cabinet picks, also appear to be unsparing on China’s behavior in the region.

Antony Blinken, the chief foreign policy advisor to Biden during his campaign and a likely pick for a top role in the administration, called China “arguably the biggest challenge we face from another nation-state – economically, technologically, militarily, even diplomatically,” when interviewed by CBS News’ Intelligence Matters program in September, and said that the U.S. needed a coalition of countries behind it to approach China from a “position of strength.”

Michele Flournoy, widely thought to be the top candidate for Biden’s secretary of defense, has opined in stark terms on how to counter China’s military build-up.

“If the U.S. military had the capability to credibly threaten to sink all of China’s military vessels, submarines, and merchant ships in the South China Sea within 72 hours, Chinese leaders might think twice before, say, launching a blockade or invasion of Taiwan,” she wrote in her own article in Foreign Affairs back in June.

Another sign that a Biden administration might carry forward Trump policy toward the region is that when he held a post-election call Australian Prime Minister Scott Morrison, his transition team issued a statement saying that Biden looks forward to cooperating on “maintaining a secure and prosperous Indo-Pacific region.”

The term “Indo-Pacific” was embraced by the Trump administration and became the foundation for the “Free and Open Indo-Pacific” concept that has provided much of the rationale for its approach toward the South China Sea and its criticism of China’s behavior there.

Biden’s usage of the phrase may be a sign that while many parts of his foreign policy will differ from that of his predecessor, some things will stay the same.

He needs to take a tougher stance than the previous administration.

Who are you kidding ?? China knows so much about Senior Biden and his son Hunter ahhaah