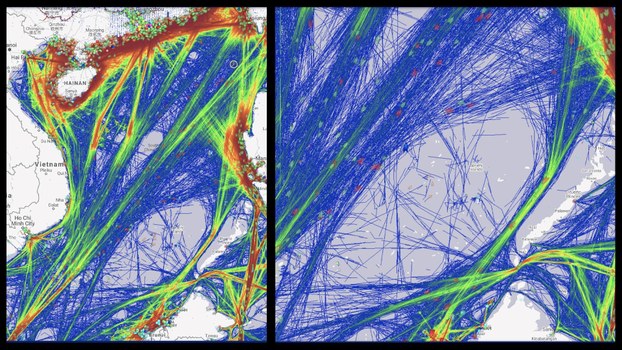 Data shows China’s militarization of the South China Sea appears to be having significant effects on commercial shipping in the region. Experts say that Beijing’s bases and naval build-up are ultimately meant to police the disputed waters and secure China’s own trade routes.

China conducted two military exercises in the Paracel Islands over the past three months, amid rising tensions with the United States. In both cases, it halted all maritime traffic through the area for the exercises’ duration, and in the second set of drills it also launched anti-ship ballistic missiles into the water. On Saturday, it announced two more exercises in the Paracels for this week – which would bring the total count of drills ever conducted in the area to four.

Experts say the South China Sea drills, which encompassed an area of over 13,000 square miles off China’s Hainan province, may have disrupted shipping, but just for a few days in early July and late August. More significant are the trends revealed by ship-tracking data covering a longer period that show commercial ships are avoiding China’s outposts and artificial islands in the Paracels in the northern part of the South China Sea, and particularly in the Spratly Islands further south. In both locations, shipping traffic is becoming more concentrated on a small number of increasingly busy routes.

“There’s only a series of very narrow passages through the South China Sea straddling the Spratlys. It doesn’t take much to cause a disruption in the supply chain, over those sea lanes,” said Sal Mercogliano, a maritime historian at Campbell University in North Carolina.

“I think one of the things the Chinese are trying to do is ensure that those commercial routes stay open, and that’s one of the reasons they’re putting themselves on those routes, to ensure there is not an interdiction. There is not a stop to the flow of goods and material,” he said.

But if that’s the goal – a trading environment on China’s terms -- it deviates sharply from how the United States and key allies view the problem. The U.S. has often argued that China’s militarization threatens free trade and unobstructed shipping traffic, and Australia, Japan, the United Kingdom, India, and Germany have all echoed this concern.

Nearly one-third of the world’s trade passes through the South China Sea, constituting roughly $5 trillion worth of goods. Out of the top 10 ports handling the cargo ships that ferry these goods, nine are in Asia.

China claims virtually all the South China Sea on the basis of “historic rights,” a position unsupported by international law. That has put Beijing at odds with six other Asian governments – Vietnam, the Philippines, Taiwan, Brunei, Malaysia, and Indonesia.

China has asserted its supposed jurisdiction through deployments of its coast guard and navy, both of which constitute the largest fleets of their kind in the world, according to the annual China Military Power Report put out by the U.S. Department of Defense.

So far, there is little evidence of serious disruption of commercial shipping in the South China Sea. However, data gathered by MarineTraffic, an online service that tracks ships, shows that between 2016 and 2017, most ships carrying oil or cargo were going around the Paracels, increasing traffic to the area’s southeast and northwest, although a more direct route through the Paracels would decrease fuel costs. 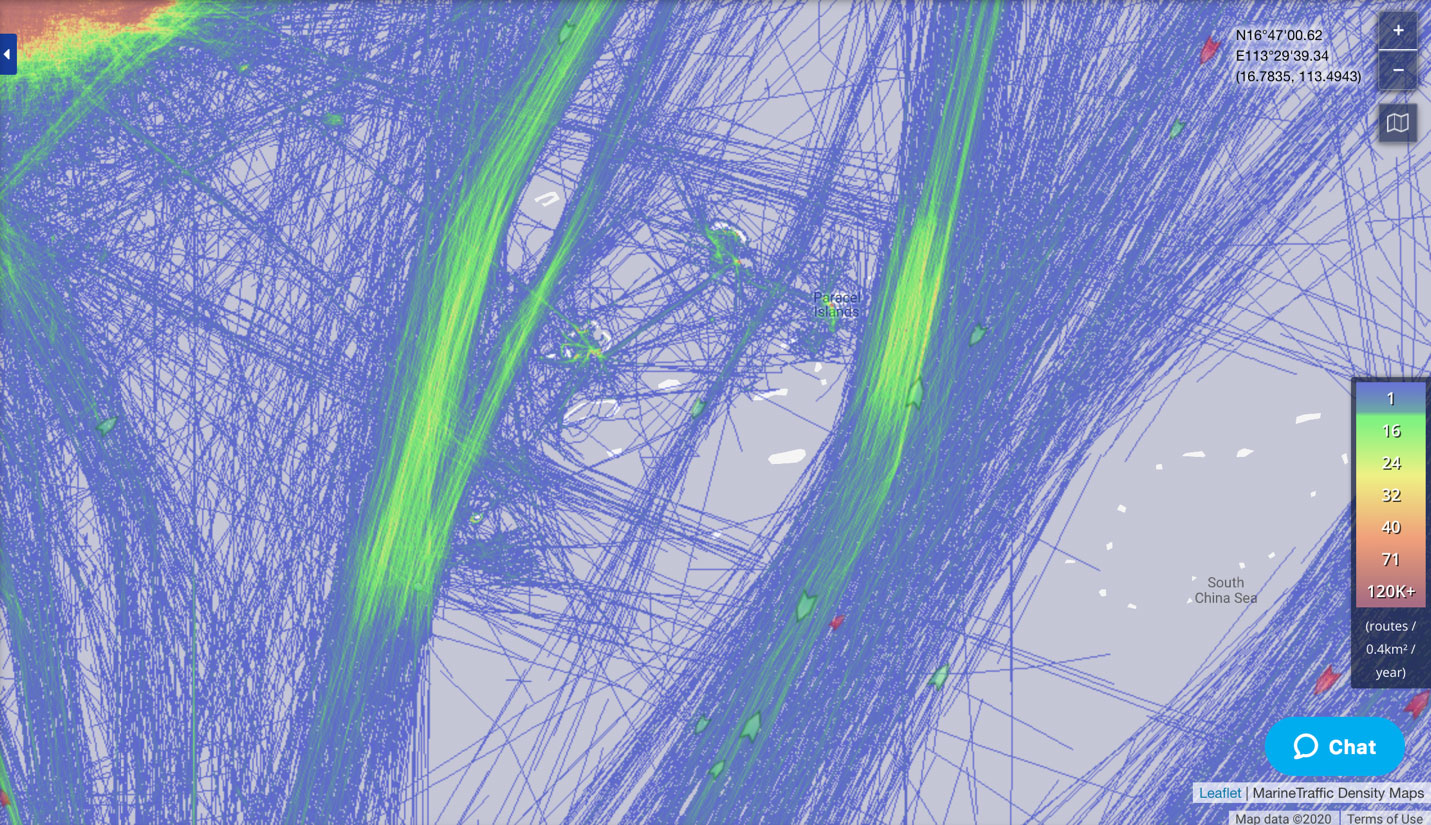 Shipping traffic in the northern half of the South China Sea in in 2017. Green lanes indicate higher volumes of traffic. In both years, most ships preferred to go around rather than through the Paracel Islands, which China occupies and has made into a major military hub. Data courtesy of MarineTraffic.

Shipmap, a shipping visualization tool developed by the University College London’s Energy Institute, provides one look at container traffic through this area in 2012. Ships would more frequently cut through the Paracels, passing between Lincoln Island and Woody Island. This was before large-scale reclamation and sand dredging projects would turn Woody Island and Lincoln Island into Chinese military outposts in 2014.

The U.S. Navy performed a freedom of navigation operation through the Paracels in late August and framed that as an effort “to ensure critical shipping lanes in the area remain free and open.” The Paracels are wholly occupied by China but they are also claimed by Vietnam and Taiwan.

Johan Gott, a partner at the political risk advisory and consulting firm PRISM, and Mercogliano said the impact from diverting shipping through the Paracels remains relatively minor.

But the impact in the Spratlys, which lie further south and where the conflicting territorial claims are particularly complex, is more apparent. MarineTraffic data from 2017 shows ship traffic through this area avoids the disputed archipelago almost entirely. A single narrow lane off Palawan, the Philippines, is the main route through the waters there.

Previous maps of the area, including one from 2012 suggest this isn’t a recent change: shipping has long given the area a wide berth, predating China’s spree of island building in the Spratlys.

China now has bases at Fiery Cross Reef, Mischief Reef, Subi Reef, Cuarteron Reef, Johnson South Reef, and Gaven Reef that include runways and harbors to accommodate coastguard or civilian vessels. Brunei, Malaysia, the Philippines, Taiwan and Vietnam all either occupy or claim assorted islets, reefs and shoals in the island chain.

A close-up of the Spratly Islands and the routes commercial ships take to avoid the area. Because of the few narrow passages ships have to take around the Spratly Islands, Mercogliano believes it would take little effort to disrupt crucial shipping lanes there, which explains China’s military build-up in the area. Data courtesy MarineTraffic.

Gott noted that it was not in China’s interest to interfere in commercial shipping as China’s goods sail through the area as well. Seven of the 10 largest commercial ports are in China, and some of the biggest shipping companies in the world are Chinese and dependent on access to the waterway.

“In peacetime, I don’t see there being significant disruption to the flow of goods,” Gott said.

Gott added that military exercises, like the ones conducted this summer in the Paracels by China, would have little impact on shipping companies’ costs and profit as ships are accustomed to adapting to circumstance.

“There is a disruption to shipping, but it is a limited amount of time, and I think shipping companies are sort of used to having to reroute and renavigate, because of weather, because of military [exercises], whatever it may be,” Gott said. “I don’t think that’s going to be a noticeable difference in terms of your cost of shipping one container.”

Gott said the bigger threat of China’s assertive behavior in the South China Sea is related to resource extraction in the exclusive economic zones, or EEZs, of neighboring countries.

Each country has an EEZ that extends 200 nautical miles beyond their shores, which they can exploit for fish, oil, and other resources. However, China’s claims in the South China Sea cut into the EEZs of states like Vietnam, the Philippines, Malaysia, Brunei, and Indonesia.

This is a concern often raised by the United States, in its increasingly intense war of words with China.

David Helvey, a senior Pentagon official for Indo-Pacific Security Affairs, highlighted China’s efforts to limit other countries’ exploitation of resources in their EEZs when he was asked by Radio Free Asia if the U.S. has seen any explicit threats to shipping in the South China Sea by China.

He cited instances of “sending maritime militia or Chinese coastguard or even in some circumstances [People’s Liberation Army] Navy assets and vessels into exclusive economic zones to harass, challenge fishing activities or in some cases energy exploration and exploitation.” Helvey was speaking at a Sept. 16 event held by the Washington, D.C., think tank, the Global Taiwan Institute. 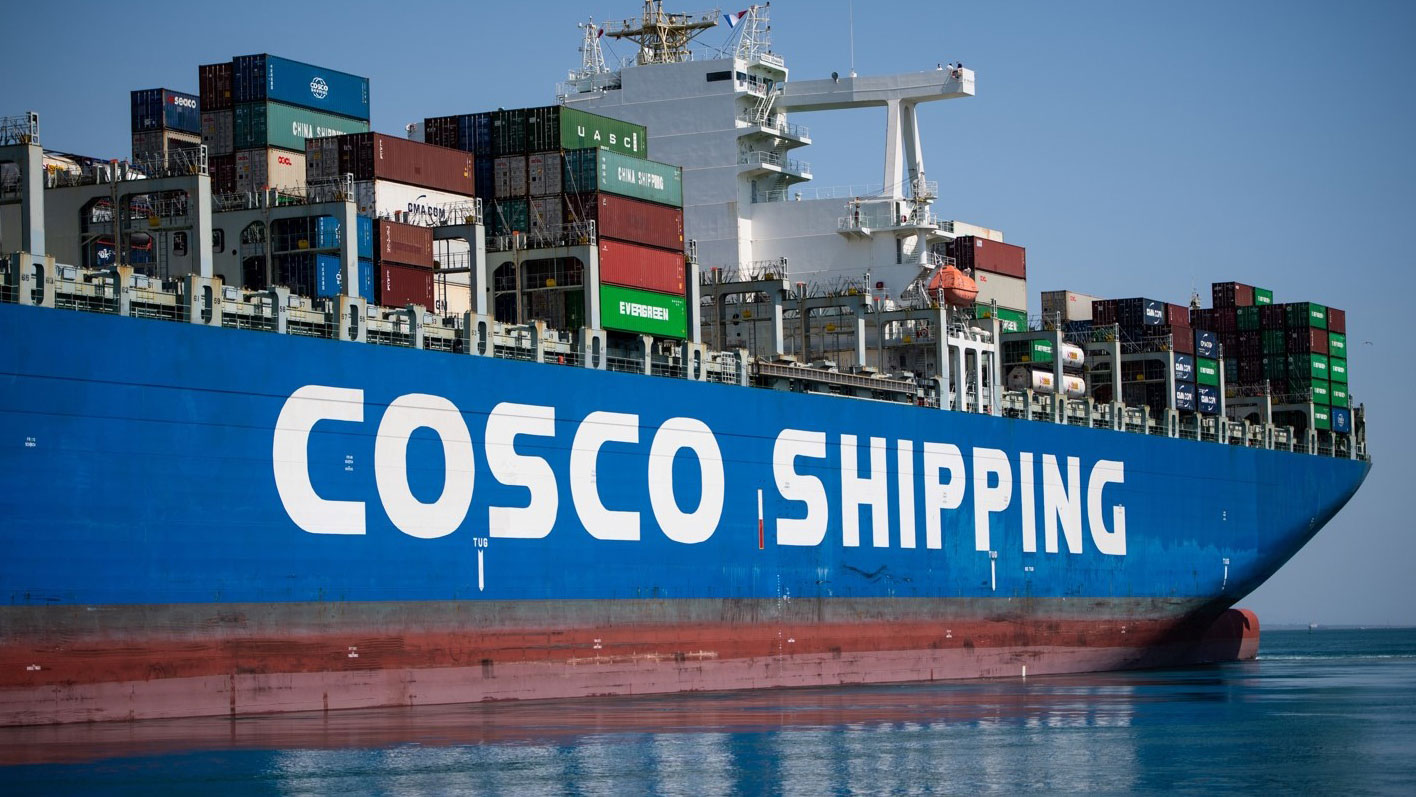 A COSCO Shipping cargo ship leaving the EuroFos terminal at the Fos-Sur-Mer harbor, in Marseille, southern France, July 23, 2020. COSCO formed out of a state-backed merger between two of China’s biggest shipping conglomerates in 2016, creating the third-largest shipping company in the world. Credit AFP

China: A Greater Sea Power than the U.S.?

China asserts it has sovereignty over disputed areas in the South China Sea, and on Monday described its construction of military facilities in the Spratlys as an exercise of its rights to “self-preservation and self-defense under international law.”

“China's construction on our own territory is aimed to meet the civilian need in the South China Sea, provide more public goods and services to the region and beyond, and fulfill our international responsibilities and obligations,” Foreign Ministry spokesman Wang Wenbin told a news conference in Beijing according to a transcript posted by the ministry.

“Deployment of necessary defense facilities on the Nansha Islands is an exercise of China's right to self-preservation and self-defense under international law,” he added, referring to the name China uses for the Spratlys.

Those comments point to what Mercogliano identifies as the primary reason for China’s militarization of the region – its desire to secure its own trade out of concern that the U.S. or any other country could interrupt it.

Also, at a time when many other countries have abandoned the idea of having a national merchant fleet, China has embraced it, Mercogliano says. China has a vastly bigger merchant marine than the United States or other countries, designed to ensure Chinese shipping continues in times of crisis. China also currently builds 40 percent of the world’s cargo ships.

“Who’s the better sea power?” Mercogliano posited. “If you’re in a shooting war, the U.S. Navy is, but if you’re in peacetime, with the commercial aspect, it sounds like China’s in the better position.”

China is also positioning itself as the main guarantor of security and law enforcement in the South China Sea, which may enable it to exert more control over the passage of shipping, experts say.

China considers the South China Sea to be its ‘near-seas’ and thus under its jurisdiction, and recently performed its first ever interdiction of a suspected drug-smuggling ship in the Spratly Islands, nearby its military base at Fiery Cross Reef. China’s legislature recently adopted a new law on maritime traffic that grants maritime police agencies like its coastguard the right to pursue and apprehend any suspect ship moving through its “jurisdictional waters,” a vague term that includes maritime territory claimed in the South China Sea.

“They want to be the regulatory agency. They don't want to leave a void out there for the U.S. or other nations to have to fill. They'd rather fill it themselves,” Mercogliano said.