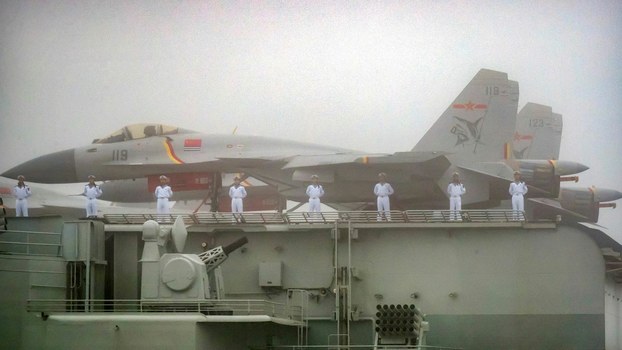 Sailors stand near fighter jets on the deck of the Chinese People's Liberation Army (PLA) Navy aircraft carrier Liaoning as it participates in a naval parade to commemorate the 70th anniversary of the founding of China's PLA Navy in the sea near Qingdao, in eastern China's Shandong province, April 23, 2019.

China is set to greatly increase its military presence in the South China Sea, according to a new U.S. Department of Defense report. China’s neighbors can expect to see its newest aircraft carrier, ship-killer missiles, and Marine Corps wade into disputed waters more boldly as the People’s Liberation Army focuses on an “expeditionary” capability, facilitated by the increasing militarization of its outposts in the Paracel and Spratly Islands.

China has strengthened and modernized its military capabilities to the point where its People’s Liberation Army (PLA) is “already ahead of the United States” in some areas, the Pentagon said in its annual China Military Power Report published on Wednesday.

“There didn’t used to be this much tumult in the South China Sea,” Deputy Assistant Secretary of Defense Chad Sbragia said at an event held by the Washington, D.C.-based American Enterprise Institute on Tuesday. He cited China’s construction of artificial islands in disputed waters and the refusal of China to delimit its claims in accordance with the United Nations Convention on the Law of the Sea, or UNCLOS.

“Which would have been the right thing to do,” he added. “They have not. They have continued to argue and put forward claims that are inconsistent with international law. That’s certainly one of the aspects that we’ve talked to the Chinese about, both in our department and in other departments.”

China now has the world’s largest navy, with an overall battle force of around 350 ships and submarines compared with the U.S.’ 293 ships, the report said. Some of this growth, according to the Pentagon, is aimed at asserting China’s claims in the South China Sea.

Notably, China’s first domestically-produced aircraft carrier, the Shandong, is “very likely” to be permanently stationed at Yulin Naval Base, the home base for the PLA Navy’s South Sea Fleet that sits right on the doorstep of the Paracel Islands, a string of rocks disputed between China, Vietnam, and Taiwan.

China now also operates 30 Type 054A guided missile frigates and over 42 Type 056 corvettes – both classes of warship frequently spotted in the South China Sea. It is also planning on patrolling the South China Sea with “AI-enabled unmanned surface vessels,” although the report is scant on details about them.

The PLA Marine Corps, amphibious troops under China’s navy that have exercised in the Paracel and Spratly Islands this year, has also grown exponentially, from two to eight brigades.

However, the Marine Corps has improved “slower than expected,” according to the report, with only its original two brigades properly equipped and ready for the its mission of safeguarding China’s bases in the South China Sea and seizing other small islets and reefs there.

Nonetheless, China is preparing its forces to work farther and farther afield, as it builds up its “expeditionary” capabilities with the help of its artificial islands in the South China Sea.

“The construction of new airfields and hangars on outposts in the South China Sea extends the possible operating areas of PLA aviation forces,” the report says. “Future deployments of PLA combat aircraft operating from Spratly Island outposts could feature extended range and/or loiter time over the South China Sea or even reach into the Indian Ocean.”

Two of China’s newest bombers, the H-6K and H-6J, are known to have landed at key Chinese military bases in the South China Sea, such as Woody Island and Fiery Cross Reef.

Despite the report’s warnings about China’s increasing military might versus the United States, China downplayed its findings on Wednesday and took issue with its framing of China’s intentions in modernizing its armed forces.

“The Constitution of the People's Republic of China clearly stipulates that China adheres to the path of peaceful development and promotes the building of a community with a shared future for mankind,” Hua Chunying, a spokesperson for China’s foreign ministry, said at a press conference in Beijing. “China has also pursued a national defense policy that is defensive in nature. China is a builder of world peace, a contributor to global development and a defender of international order. The development of China's military power means growing strength for world peace.”

The Pentagon report, however, says PLA has also improved its ability to hit moving ships at sea with missiles from the Chinese mainland.

China launched four anti-ship missiles into waters off the Paracel Islands last week, including a DF-26 intermediate-range ballistic missile (IRBMs), as part of its military exercises in the area. According to the Pentagon, the PLA Rocket Force is dramatically ramping up its supply of these ‘ship-killer’ missiles, which can be used with either conventional or nuclear warheads. The Pentagon estimates China now possesses about 200 DF-26 IRBMs.

“Our leadership has called repeatedly on the Chinese to limit the activities of what they’re doing. To not militarize their features, to halt these really unlawful practices and expectations they hold, for us and others,” Sbragia said. “As a result we have increased our military operations and activities in the South China Sea, both by ourselves and in coordination with others in the region, and globally, and will continue to do so.”