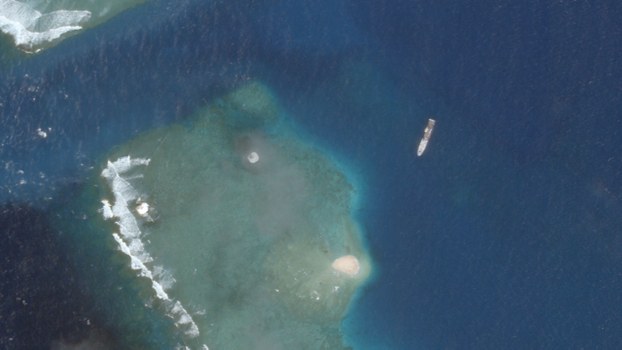 Planet Labs Inc.
Pompeo takes his anti-China message on the road in Asia.

China’s coastguard and maritime militia are nothing if not persistent when it comes to making their presence felt around hotly disputed reefs and islets in the South China Sea.

Ship-tracking data and satellite imagery reviewed by Radio Free Asia shows that Chinese vessels have lurked for five months, with little interruption, at the Scarborough Shoal off the Philippines; for three months at Vanguard Bank off Vietnam’s southern coast; and seven months at the Union Banks, where both China and Vietnam have outposts.

This reporting sheds a light on what has become so commonplace that it scarcely registers as news any more – China’s coastguard and maritime militia are a semi-permanent fixture in the exclusive economic zones and near the claimed land features of countries that dispute its assertion of sovereignty over virtually all of the South China Sea.

What follows is a recounting at what’s happened at key disputed areas through the summer and into the fall. Some of the ship deployments would have been reported by news outlets like RFA at some point. The enduring presence of many of these vessels has not.

At Scarborough Shoal, a shallow feature off the coast of the Philippine island of Luzon, the China Coast Guard, or CCG, has rotated ships in and out of the area since May 5, ship-tracking data show. CCG ships numbered 3303, 3305, and 3175 arrived at that time, as RFA has previously reported.

Frequently, these ships try to conceal their presence by not broadcasting their Automatic Identification System (AIS) signal, making it difficult to track them. But signs slip through. For example, the 3303 and 3305 stopped broadcasting as they arrived at Scarborough Shoal at that time, but the 3175 did not. The 3175 (also known as the Zhong Guo Hai Jian 75) left in mid-May but made repeated trips back, patrolling Scarborough Shoal again between June 15-July 21, and Aug. 18-Sept. 7.

It was joined by the CCG 3302, which arrived on June 8 and left on July 20, only to return a month later on Aug. 15, leaving yet again on Sept. 8. Assuming the 3175, the 3303, and 3305 moved as a group that would mean four CCG ships patrolled Scarborough Shoal from early June to late July, and from mid-August to early Sept.

The most recent occupier is the CCG ship Zhong Guo Hai Jian 71, which entered Scarborough’s lagoon on Sept. 20 and remained there until Oct. 14, the last day ship-tracking data shows any foreign ships.

The shoal is a triangle of sand in Philippine waters known for its abundance of giant clams. China began occupying the area in 2012 during a stand-off with the Philippines that would prompt Manila to file a landmark tribunal case that found against China’s claim to “historic rights” over virtually all of the South China Sea in 2016.

South of Scarborough Shoal, CCG ships have been also been sitting close to Second Thomas Shoal since late September. It’s a feature also claimed by the Philippine that sits only 105 nautical miles from the Philippine island of Palawan.

CCG ship 5302 arrived there on Sept. 26 and left on Oct. 3, when it was replaced by another CCG ship with little identifying information. Other ship-tracking records list the second ship as the CCG 5305, which has been active in the South China Sea in the past. The 5305 was still there as of Friday. During its stay, it has taken brief trips to circle around Half Moon Shoal, closer to the Philippine coast, on Oct. 7, 14, and 21.

The constant pace of Chinese patrols is made possible by the proximity of Second Thomas Shoal to Mischief Reef, a Chinese-occupied artificial island and base less than 30 nautical miles to its west. It’s a frequent stopping point for China’s coastguard, navy, and for the People’s Armed Forces Maritime Militia. Eight maritime militia ships sailed to Mischief Reef on Sept. 15 and were still there as of Friday, ship-tracking data and satellite imagery show.

It remains to be seen if China will dial down its presence after the Philippines announced last week a joint venture with Chinese national oil company CNOOC, soon after it lifted a six-year moratorium on oil exploration in Philippine waters in the South China Sea.

The Philippines has gone back and forth between publicizing the Chinese presence within its waters and downplaying it. Renato Cruz de Castro, a professor at De La Salle University in Manila, said this is mostly a result of factionalism within the Philippine government of President Rodrigo Duterte.

Members of the government, including Duterte himself, may look to China for economic growth, he explained, but "you have the military and the Department of Foreign Affairs maintaining their position: that we have to look at China suspiciously." 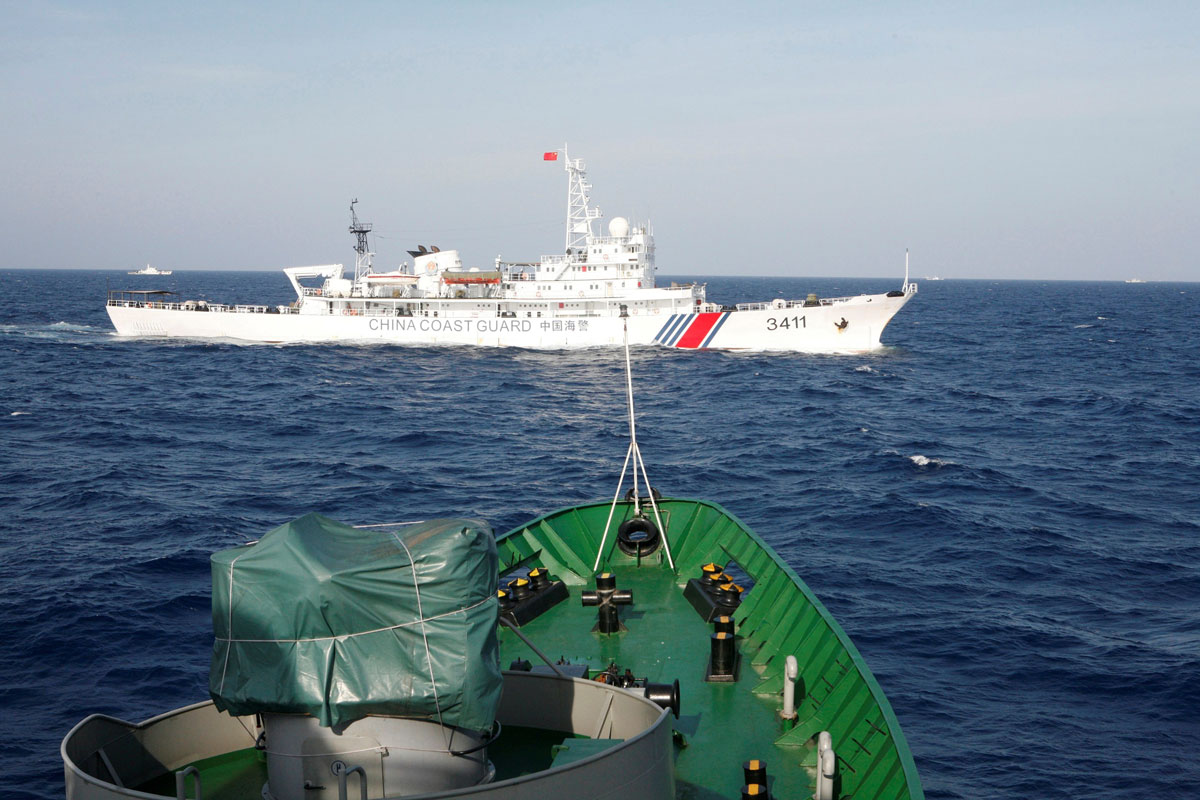 A file photo of a ship (top) of the Chinese Coast Guard is seen near a ship of the Vietnam Marine Guard in the South China Sea, about 210 kilometers (130 miles) off shore of Vietnam May 14, 2014. Credit: Reuters

At Vanguard Bank in the Spratly island chain, China’s coastguard has maintained a continuous presence since July, for a total of 113 days, with only the occasional interruption.

Vanguard Bank is a submerged feature off Vietnam’s southernmost coast that hosts a small Vietnamese outpost and is located near several oil fields licensed to international and companies for exploration, as well as state oil company PetroVietnam. While China claims Vanguard Bank under its “nine dash line” that roughly demarcates its South China Sea claims, the bank sits entirely on Vietnam’s continental shelf and is within Vietnam’s EEZ.

CCG ship 5402 arrived at Vanguard Bank on July 4, sailing within 30 nautical miles of an oil rig as it arrived, and stayed in the area until Aug. 18. The day before, another CCG ship – the 5204 – arrived to take its place. It has stayed there ever since, other than leaving temporarily to refuel and resupply at Fiery Cross Reef. It also once made a detour once to Luconia Shoals, which are also claimed by Malaysia.

China’s patrol at Vanguard Bank risks a standoff with Vietnam, which is what happened for several months in 2019 after the CCG ship showed up around the same time of the year.

Vietnam’s government has not publicly commented in recent months on the presence of China’s coastguard at Vanguard Bank, although it has criticized other aspects of Beijing’s conduct in the South China Sea, including its military drills at the Paracel Islands further north, which are also claimed by Vietnam.

The deployment at Vanguard could potentially embroil Indonesia too. Patrols at the bank occasionally venture into the EEZ of Indonesia’s Natuna Besar, the main island of the Natuna Regency, which lies about 205 nautical miles away. On Sept.  12, CCG 5204 was expelled from Indonesian waters by Bakamla, the Indonesian coastguard agency.

While Indonesia does not regard itself as party to the South China Sea dispute, Beijing claims historic rights to parts of the sea overlapping Indonesia's EEZ, specifically off the coast of Natuna.

The presence of the 5204 has also provoked a response from the Vietnamese Fisheries Resource Surveillance, a coastguard-like agency of Vietnam that frequently is the first responder to China’s incursions into Vietnamese waters and Vietnamese-claimed maritime territory.

A ship with that agency, Kiem Ngu 273, was deployed to Vanguard Bank on Oct. 13, and ship-tracking data shows it sailing less than one nautical mile from the 5204, with patterns suggesting the two ships sailed nearly alongside each other on Oct. 13 and 14. But that also brought the Kiem Ngu within 200 nautical miles of Natuna, where it remains.

Indonesia deployed the KN Tanjung Datu, an offshore patrol vessel in service with Bakamla, within 35 nautical miles of Vanguard Bank on Oct. 7. However, rather than responding to the Kiem Ngu or CCG 5204, it could be escorting a cable repair ship in the region that seemingly started work off the coast of the Natunas on Oct. 13. 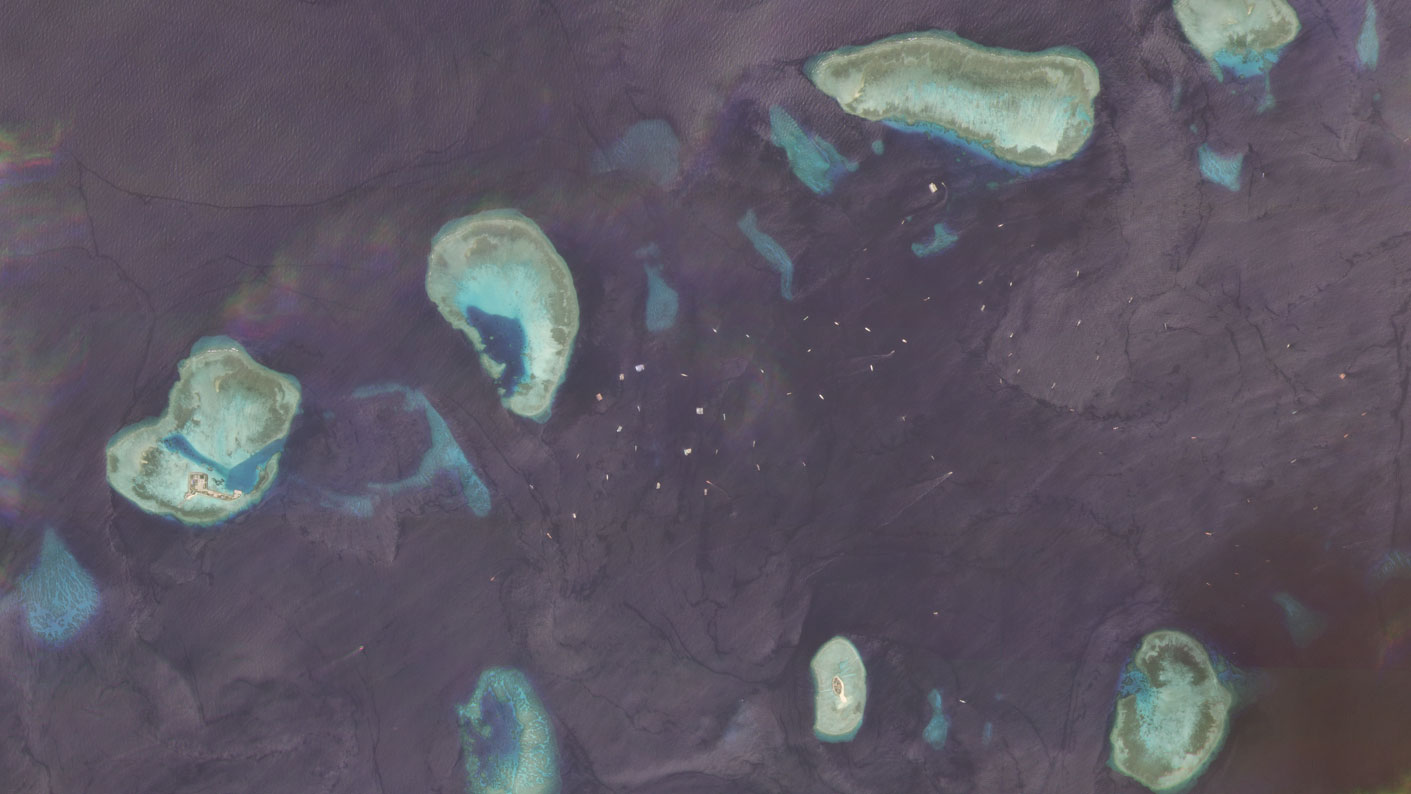 The Union Banks are a circle of shallow reefs and rocks in the Spratlys, which offer rich fishing grounds and are home to several Vietnamese and Chinese outposts less than two nautical miles from one another.

Chinese maritime militia have been a consistent, verified presence there since March, with anywhere between four and 12 boats loitering there over the past six months.

In addition, there are often dozens of fishing boats. More than 100 fishing boats and other vessels of indeterminate nature were spotted at the Union Banks on Sept. 26 alone – a not unusual amount of activity based on satellite imagery RFA has examined of the area since April.

The imagery shows Chinese maritime militia vessels frequently mixed in with the larger fishing fleet, which may also include maritime militia vessels that are not broadcasting an Automatic Identification System (AIS) signal. The majority of these ships, though, appear to be civilian fishing boats, and some have been observed sailing in from Vietnamese, Chinese, and Philippine waters.

Vietnam has maintained a constant presence at its outposts as well.