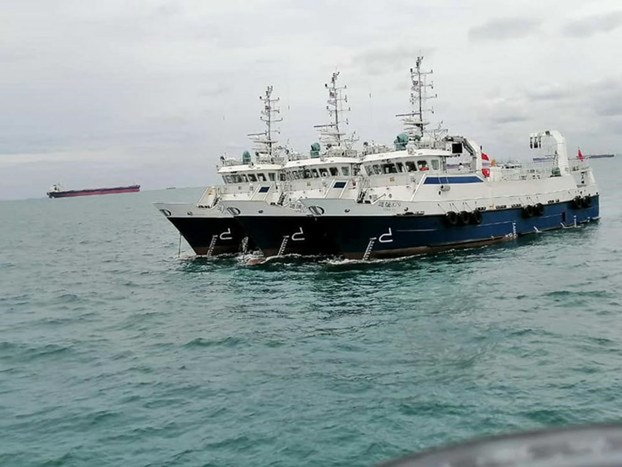 Three of six Chinese fishing vessels that Malaysia detained earlier this month for allegedly entering its waters without permission.

Malaysian authorities have released all crew members of six Chinese-flagged fishing boats whom it had detained for allegedly trespassing in its territorial waters off southern Johor state earlier this month, a senior Malaysian security source told BenarNews on Thursday.

The six boats and 60 crew were intercepted in territorial waters off Tanjung Setapa, on Johor’s southeastern coast on Oct. 9, the Malaysian Maritime Enforcement Agency (MMEA) said at the time.

Three days after the vessels and crew were detained, China asked Malaysia to carry out a fair investigation in accordance with the law.

“All the Chinese fishermen have been released last week. Because this issue is related to diplomatic relations, it cannot be revealed to the public. We will not be issuing any statement,” the security source told BenarNews, an RFA-affiliated online news service, on Thursday. The source spoke on condition of anonymity because they had not been authorized to speak to media on the matter.

However, it was not immediately clear whether Malaysian authorities had also released any of the Chinese fishing boats. The source did not respond to further questions.

The MMEA had said in a statement after detaining the boats that the crew would be investigated under Malaysia’s Fisheries Act 1985 and the Merchant Shipping Ordinance (OPS) 1952. The former governs foreign fishing vessels entering Malaysian waters without notice and the latter penalizes for anchoring without approval.

The source declined to comment on whether the crew was investigated and fined.

Officials at the MMEA, the Chinese embassy in Kuala Lumpur and the Malaysian foreign ministry also declined to comment when BenarNews contacted them on Thursday.

Malaysian maritime authorities are very serious in ensuring that country’s waters are always protected, and will not compromise with any party that violates the law, MMEA regional director Mohd. Zulfadli Nayan said in a statement after the six boats were detained.

In a joint press statement, Malaysian Foreign Minister Hishammuddin Hussein and Wang “underscored the importance of maintaining peace, security and stability, as well as freedom of navigation and overflight above the South China Sea.”

But the two foreign ministers did not tell reporters whether they had discussed the fate of the detained Chinese fishing boats.

This latest incursion of Chinese boats into Malaysian waters came a little more than two months after Malaysia said it had rejected China’s “nine dash line” that roughly demarcates its claims to most of the South China Sea.

Its statement was a response to China protesting Malaysia’s initial claim last December, in a submission to the United Nations, to an extended continental shelf in the South China Sea.

In July, Malaysia’s Auditor-General said Chinese coastguard and navy ships intruded into Malaysian waters in the disputed waterway 89 times between 2016 and 2019. These Chinese ships often stayed in the area despite the Malaysian navy telling them to leave, the Malaysian government said.

Six other Asian governments have territorial claims or maritime boundaries in the South China Sea that overlap with the sweeping claims of China. They are Brunei, Indonesia, Malaysia, the Philippines, Taiwan and Vietnam.

While Indonesia does not regard itself as party to the South China Sea dispute, Beijing claims historic rights to parts of that sea overlapping Indonesia's exclusive economic zone.

Malaysia has rebuffed both Chinese and U.S. activity in the South China Sea this year.

It rejected China’s “Nine-Dash Line” in July, but also expressed displeasure when the U.S. Navy sent warships near where Chinese vessels were harassing a Malaysian oil exploration effort in April.

At that time, Foreign Minister Hishammuddin signaled in a statement that such deployments could increase tensions and lead to destabilizing “miscalculations.”

In August, as both China and the U.S. were lobbying Southeast Asian nations, including Malaysia, for support, Hishammuddin said on his social media accounts that matters relating to the South China Sea must be settled by following international law, including the United Convention on the Law of the Sea, or UNCLOS.