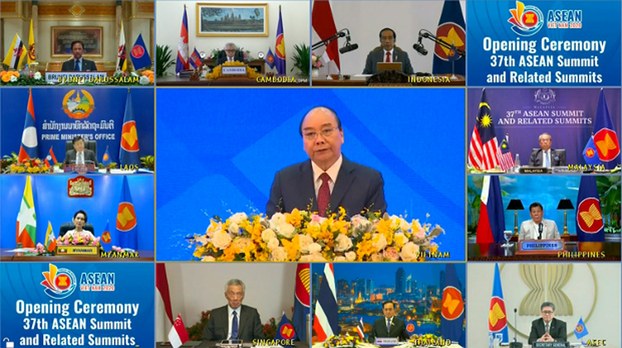 Southeast Asian countries must strive for peace and not be caught in rivalry between “major powers” that are raising tensions and jockeying for influence in the region, leaders said as a virtual summit of the ASEAN bloc opened on Thursday.

Vietnam, which holds this year’s chairmanship of the Association of Southeast Asian Nations, is hosting the meeting of leaders from the 10 member-states that goes till Sunday. Security in the South China Sea and collective efforts to combat the coronavirus pandemic and its economic damage across the region were expected to be prominent in discussions among the leaders.

“This year, peace and security are under even greater threat as a result of compounding risks arising from the unpredictable conduct of states, rivalries and frictions among major powers,” Nguyen Xuan Phuc, the prime minister of Vietnam, said in opening remarks at the 37th ASEAN Summit.

He said the regional bloc had also “expressed consistently its principled position and strong commitment to turning the South China Sea, a critical sea lane of the region and the world, into a sea of peace, stability, security and safety for the free flow of goods.”

Tensions escalated in the South China Sea this year, with heightened rhetoric by the United States and China in July, followed by stepped-up military activity by the rival superpowers in the disputed waterway.

ASEAN “will not be caught in such rivalries and will be able to play a central role in developing regional cooperation,” Joko “Jokowi” Widodo, the president of Indonesia, Southeast Asia’s largest country, said in his opening remarks at the summit.

“We all, without exception, have a responsibility to maintain peace and stability in the South China Sea,” he added.

Malaysian Prime Minister Muhyiddin Yassin, for his part, said that the presence of foreign warships and boats in the South China Sea could result in “miscalculations which may affect peace, security and stability in the region.”

At the same time, leaders asserted the preeminence of the 1982 United Nations Convention on the Law of the Sea, or UNCLOS, in guiding maritime conduct.

“The 2016 Arbitral Award on the South China Sea is an authoritative interpretation of the application of UNCLOS. It is now part of international law. And its significance cannot be diminished nor ignored by any country, however big and powerful,” Philippines Rodrigo Duterte said.

In addition to China, six other Asian governments have territorial claims or maritime boundaries in the South China Sea that overlap with Beijing’s sweeping claims there. They are Brunei, Indonesia, Malaysia, the Philippines, Taiwan and Vietnam. While Indonesia does not regard itself as a party to the South China Sea dispute, Beijing claims historic rights to parts of that sea overlapping Indonesia's exclusive economic zone.

On day one of the four-day summit, ASEAN countries’ leaders also said that ending the global pandemic and correcting the humanitarian and economic toll it has taken should be nations’ priorities.

“More than ever, all countries need peace and stability for cooperation and development; and the people require attention, assistance and protection in overcoming this period of hardship,” said Nguyen Phu Trong, general secretary of the Vietnam Communist Party.

“This will only be possible if conflicts and friction over interests and differences in thinking and approaches are settled with trust, constructive purpose and goodwill from all parties concerned.”

With more than 450,000 cases of the coronavirus disease detected in Indonesia, the archipelago- nation leads all countries in East Asia in the number of COVID cases and deaths resulting from it, according to disease experts at U.S.-based Johns Hopkins University.

Separately, Vietnam’s Phuc said that the regional bloc and Japan had agreed to set up the ASEAN Center for Public Health Emergencies and Emerging Diseases, so that the region could be better prepared to deal with future pandemics.

At the ASEAN-China meeting, Jokowi called for stronger economic cooperation between the regional grouping and Beijing.

“2020 is the year of ASEAN-China digital economic cooperation. As a global leader in the digital economy and home to a third of the world's unicorns, including Baidu, Alibaba and Tencent, China is a strategic partner for ASEAN,” Jokowi said.

“China will actively consider ASEAN countries’ requirements for COVID-19 vaccines and take practical steps to promote the availability and affordability of the vaccine,” Li said.

An ASEAN-U.S. summit is scheduled for Saturday. Vietnam has not confirmed whether President Donald Trump would attend the online meeting, the Associated Press reported. Trump attended the summit in 2017, but sent representatives to the last two meetings.