'I'm Not Afraid to Live Openly'

Tibetan writer Woeser has a message for the state security police who confronted her at the Lhasa Railway Station.
By Tsering Woeser
2012-12-31
Tweet 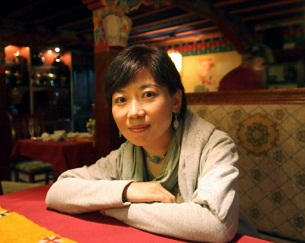 At Lhasa Railway Station, they don't let people seeing off passengers go into the station. They don't even sell platform tickets. I'm sure there isn't another railway station like it in the world. I went into the station on my own, after a tearful parting from my mother and sister, and three state security police, Tibetans like me, appeared from the sidelines and took me into a room. They behaved well, and made it clear that this was just "a chat" and not a "reprimand." But the unspoken meaning was clear: they had the power to reprimand me, if they had wanted to. There wasn't much time, so they just said their piece, and didn't give me chance to say anything. After that, they picked up my luggage and saw me onto the train, saying they hoped to be friends from now on.

Here is what I would have liked to say to them, but didn't have time: Firstly, I would like to thank you for carrying my luggage, because, thanks to that stupid rule about accompanying passengers onto the platform, I would have been lumbered with two very heavy suitcases. They did tell me not to tell anyone about our meeting, so I'm sorry I haven't been able to stick to that. I will agree not to tell anyone your names (assuming the names you gave me were real), but I believe that, in principle, any dealings with authority must be transparent. I want to allow fresh air into certain channels, and putting the details of such meetings out there, on the table, makes it hard for rumors to change fact into fiction.

You said that you were showing "humanity" by only coming to talk to me as I was leaving Lhasa, to avoid upsetting my mother and other family members. I appreciate this; any shock to my mother, who is in her seventies, would be my greatest concern. However, I know your insidious presence in my family only too well; this is an evil which is anything but humane. All of my friends and family have been invited to "drink tea" [with state security police], and most of them have now distanced themselves from me as a result. During the past three months I have spent in Lhasa, a lot of relatives whom I was previously very close to have been frightened off, and haven't dared to show their faces. Where is the humanity in that?

It's true that you haven't jumped over the wall in the middle of the night and dragged me away in front of the elderly and the children, like a "terrorist." But you should know, as you trumpet your "humanity," that it only exists by comparison with the way you treat other people. My hope is that that you will treat everyone humanely, not just special cases.

Another topic you mentioned was "exaggerating," which I take is a criticism of me. OK, so we have different viewpoints and outlooks, and I can't demand that you accept my views on the situation in Tibet and among Tibetans. But as for my exaggerating reality, this view comes from an insufficient grasp of the situation, and the fact that it hasn't yet been spoken about enough. The relevant departments were exaggerating after the March 14 incident [of 2008], when they said "there is sufficient evidence to show that this was a strategic plot and a conspiracy by the Dalai Lama clique." Four-and-a-half years later, they still have yet to produce any evidence, and what's more, they say that Lhasa, with its streets packed full of army and police, "scores the highest on the happiness index." Don't you think it's trivial by comparison to accuse me of exaggerating in my writings about the reality of Tibet?

It is a characteristic of dictatorial regimes that they are smug and self-satisfied about everything they do, while anything anyone else does must have ulterior motives.

As I was on my way back to Lhasa [to catch the train], in a friend's car, we were stopped and searched several times along the way by the military, or the police, armed with real guns and bullets. My friend, who works in the film industry, had a video camera with him, and they held us up for more than 20 hours, and nearly didn't let us into Lhasa. There are cameras installed in every corner of Tibet, but a single camera carried by a member of the public is to be guarded against at all costs. Isn't that a bit absurd? How can such a huge country, which holds so much power, get into such a panic over a fiber optic cable?

Based on what you told me, you were fully aware of all my movements while I was in Lhasa. It is a simple matter for the full power of the state to keep track of one small individual. But I don't have any secrets. I'm not afraid to live openly under the sun.

Keep up the fight!

You are not alone. We applaud your determination & bravery. Not only as practising Tibetan Buddhists , but actively, for the sake of human rights & entitlement ; we hear your voices. We fight the only way we can , by keeping your situation in the public eye many 1000s kilometres away. We protest , pladge & pray for you. Never lose hope. With Love

Thank you for courageously spreading this information to the world. I repost your words to several public forums.

You are brave and full of energy. May the good things comes to you. Hugs from Spain