'I Have Seen China's Dark Side, So I am Even More Determined' 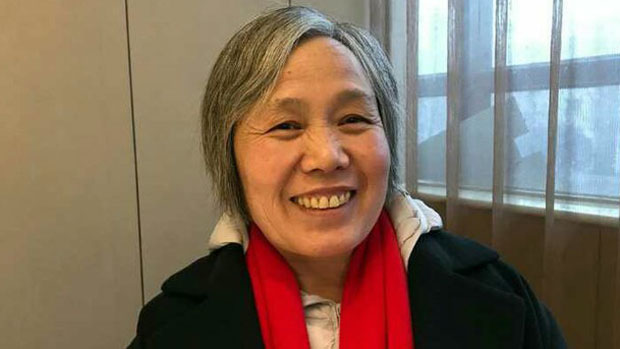 Chinese petitioner Li Yufeng, 60, after her release from Henan's Zhengzhou Women's Prison at the end of a four-year sentence, Feb. 21, 2019.
Li Yufeng

A woman jailed for making complaints about her forcible eviction at the hands of officials in the central Chinese province of Henan has vowed to continue her rights activism after being released at the end of a four-year prison term.Li Yufeng, 60, was released from Henan's Zhengzhou Women's Prison on Thursday at the end of her four-year sentence.She told RFA that she had refused food on several occasions while in prison, in protest at her treatment."I was in the women's prison for more than two years, during which time I wasn't able to get hot water to bathe," Li said. "I had to wash in cold water."Li's lawyer had lodged a formal complaint with the prison authorities over her treatment, which included being forced to wear manacles and leg irons, and to have her arms pinned behind her back as a punishment.However, the prison authorities denied any mistreatment, she told RFA.Li's problems with the government began in 2000, when she was forcibly evicted and her home demolished.Her attempts to win redress led her to fight for others' rights as well as her own, and she joined campaigns by other activists, as well as publicly showing support for the 2014 Occupy Central pro-democracy movement in Hong Kong.She was sentenced to two years' imprisonment in 2006 for commemorating the death of late ousted liberal premier Zhao Ziyang.She was rearrested as she took a group photograph with fellow petitioners and rights activists from Henan during the fifth plenary session of the 18th national congress of the ruling Chinese Communist Party in Beijing.Li received a four-year jail term in 2015 for the public order charge of "picking quarrels and stirring up trouble."But she said she will continue with her activism now that she is out of prison again."I have seen China's dark side, so I am even more determined to continue along this path," Li said. "I think, as a Christian, that I should show some love, compassion and humility.""I have no regard whatsoever for money or reputation, and so many other rights defenders are leading the way, and are able to give up the chance of material wealth," she said. "If they can do it, why can't I?""I wouldn't be this determined to go on if it weren't for them," she said.Li's friend, who gave only a pseudonym Wu, said Li had made huge personal sacrifices to fight for the rights of ordinary people."She has no pension, so it was very hard for her to eke an existence," Wu said. "She had no source of income at all when she was in Beijing, and she used to pick up discarded vegetables at the markets and take them home to cook."China's army of petitioners, who flood the ruling Chinese Communist Party's official complaints departments daily, frequently report being held in unofficial "black jails," beaten, or otherwise harassed, if they persist in a complaint beyond its initial rejection at the local level.They are often escorted home forcibly by "interceptors" sent by their local governments to prevent negative reports from reaching the ears of higher authorities. They then face surveillance, harassment and possible detention on criminal charges.Reported by Gao Feng for RFA's Mandarin Service. Translated and edited by Luisetta Mudie.