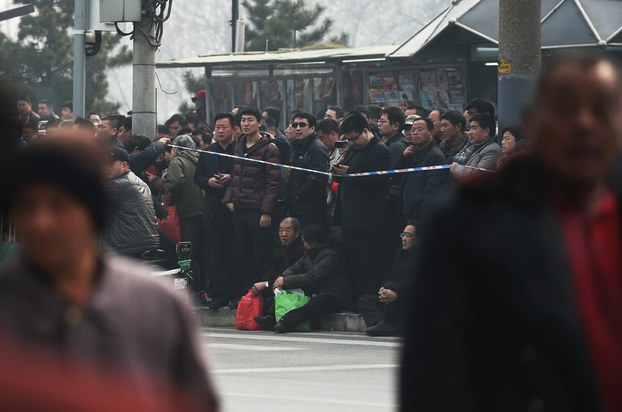 Petitioners seeking redress for grievances with the Chinese government gather opposite a government petition office in Beijing on March 3, 2016.

As the rest of the country indulged in rich cakes and moon-gazing parties, ordinary people left penniless after years of pursuing complaints against the ruling Chinese Communist Party were left to eke out a living with scant food over the Mid-Autumn Festival.The festival, which runs Thursday through Saturday, is traditionally marked by the giving of lavishly wrapped mooncakes and festivities linked to the legendary moon-goddess Chang'e, in celebration of the harvest moon.But many petitioners, ordinary people pursuing long-running bureaucratic complaints against the government, were stranded in Beijing by lack of funds, with some reduced to picking up discarded vegetables at markets for something to eat.Yang Xincai, 67, a long-term petitioner from the northwestern region of Xinjiang, said he is struggling to get by now that the government has cut off his basic social subsistence payment of just 1,000 yuan (U.S.$150) a month.Yang said he has spent the last 18 Mid-Autumn festivals in Beijing, lacking the money to pay for the three-day rail trip home.His room-mate Wang Yan, a petitioner from the southwestern province of Sichuan, said the festival highlights how precarious the lives of petitioners are."We all got together to rent a temporary room, up to 20 of us," Wang said. "We come from all over China."She said the petitioners had managed to scrape together enough money and discarded ingredients to make a few dishes."We go down to the wholesale markets ... and the wholesalers will give us vegetables they think will be hard to sell," Wang said.

Wang, who is complaining over her forcible eviction from her home by the government, hasn't been home since she first brought her complaint to Beijing six years ago."I am a single mother, and I am bringing up triplets, daughters, here in Beijing," she said. "Yang has been here the longest, nearly 20 years, and he's really in trouble now.""He daren't go back to Xinjiang now, because he fears for his life, so we are all helping him out," Wang said.Yang said he was happy to be spending the festival in company, however."This is the only time I have spent it with 15, 16 other people, and I'm really happy, even though we only have vegetarian food to eat," he said."The local governments are really cracking down on petitioners these days," he said. "I guess this means they're on their last legs."Yang is petitioning over a lost orchard in Yibak district of Xinjiang's regional capital, Urumqi, which was snatched by village officials after he refused to sell it for development."I have spent 20 years complaining about them, so they hate my guts, and they cut off my social subsistence allowance," Yang said."They haven't even given me the compensation they owe me for the land, so I have no income," said Yang, adding that he sometimes picks up discarded plastic drinks bottles and recycles them for a few pennies."Nobody wants to hire me for manual work because I'm 67 now," he said. "I have looked all over, but they say I'm too old and they don't want me."

'Sick society'A Shandong petitioner surnamed Jiang said the large numbers of petitioners near destitution show that China is now a "sick society, with no medicine at hand.""On the one hand, you have these corrupt officials living it up and making merry over Mid-Autumn Festival, and on the other, you have petitioners homeless on the streets of Beijing," Jiang said."They have nowhere to go, and life is very tough."But not all petitioners were able to spend the festival in peace.The Hubei-based rights website Civil Rights and Livelihood Watch said Shandong petitioner Sheng Lanfu was handed a 10-day administrative sentence by police.Meanwhile, the relatives of victims of the 1989 Tiananmen Square military crackdown said they have had no response from the government after more than 25 years of petitioning for compensation and a political reappraisal of the student-led democracy movement, which the government styled a counterrevolutionary rebellion."We have waited so long since we first brought this up in 1990, and we would be satisfied if they would even engage sincerely with us," You Weijie, spokeswoman for the Tiananmen Mothers victims' group, said."But they have ignored us ... and all we get is harassment from the police and negative news."

But she said Beijing can't ignore the bloody crackdown forever."Because in its own capital city, a crazed army massacred its own citizens ... the current government is the successor to that government, and the ruling party is the same one," You said."They still bear the burden of that massacre."In Hong Kong, traditional mooncakes often carry a political message, with some hand-made by rights activists to carry the stamp "Reappraise June 4, 1989" on the pastry."Every year, we get together with a few dozen volunteers and make these mooncakes ... which have 'Reappraise June 4, 1989' stamped on them," Richard Choi of the Alliance in Support of Democratic Patriotic Movements in China told RFA.The mooncakes are then taken as gifts to Beijing's representative offices in the former British colony, the last Chinese city where the 1989 massacre is still openly commemorated."This is also a form of participation, and when they are done we take them to the Central Liaison Office, to represent our demands to them," Choi said.Earlier this month, the ruling party's anti-corruption arm warned against excessive spending on mooncakes by local officials during the holiday.The Central Commission for Discipline Inspection (CCDI) has set up a complaints service enabling people to report officials holding banquets or who travel on taxpayers' money, official media reported."Amid China's nationwide anti-corruption campaign, official gift-giving is banned, and mooncakes - often seen as a hidden form of bribery - have been targeted since 2013," the Global Times newspaper, which has close ties to the ruling party, reported."It is a tradition for Chinese people to hold banquets and give gifts on festivals, such as mooncakes during the Mid-Autumn Festival, which has created opportunities for many officials to receive bribes," it quoted party school professor Zhang Xixian as saying.In 2012, a box of two mooncakes made of pure gold sold for 42,900 yuan (U.S.$6,423), raising public suspicions of corruption, the paper said.Reported by Qiao Long and Xin Lin for RFA's Mandarin Service. Translated and written in English by Luisetta Mudie.

As long as princelings like Xi Jinping continue to taboo even talk of substantial legal reforms such as an independent judiciary that is not a puppet of the CCP, petitioners who have suffered outrageous injustices at the hands of the party-state will continue to throng such offices.