By Dan Southerland, RFA Executive Editor—Tibet's best-known female writer has evolved from a member of China's privileged elite into a forceful critic. Despite the loss of her job, the closure of her blogs, and constant surveillance, Woeser reveals through her poems the courage to speak out.
2008-09-30
Tweet 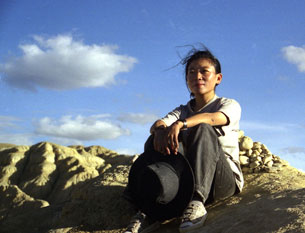 Woeser in the far west of Tibet in 2002.
Photo provided by Woeser
WASHINGTON—“Most of all I wish you courage,” the American poet Pam Brown wrote to her daughter decades ago. “That usually takes care of everything else.”

Courage is a defining trait in the life and work of the contemporary Tibetan poet Woeser.

A banned author inside China, Woeser—the name means Rays of Light in Tibetan—continues to write from her small apartment in Beijing not only poems, but also essays and reports on the current situation in Tibet.

She is under constant Chinese police surveillance.

Chinese authorities locked down Tibet following a major uprising against their rule that began in early March. Paramilitary police have now silenced the voices of protest in Tibet.

But Woeser, 42, still speaks out, publishing essays and poems on a blog hosted abroad. 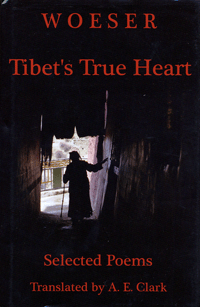 Ably translated into English by A. E. Clark, the poems trace Woeser’s evolution from a member of China’s privileged elite into a forceful critic. Her poems provide an emotional counterpart to the dispassionate reason of her prose.

Four years ago, Woeser left her job editing a literary magazine in Lhasa and moved to Beijing when she faced “re-education” for “political errors.” Formal dismissal followed.

Her book Tibet Journal had mentioned Tibetans’ abiding reverence for the Dalai Lama, whom the authorities revile as a “splittist” seeking Tibetan independence.

In 2006, after she posted a photo of the Tibetan spiritual leader with a poem wishing him long life, her blogs were shut down.

Woeser is now suing the Chinese government for denying her a passport. She doesn’t expect to win. But, as she told the Associated Press, she is using the issue as “an opportunity to talk about the unfair treatment of Tibetans over the years.”

In Lhasa during the Olympics, police questioned Woeser for eight hours, accusing her of taking pictures of police and army posts. She was forced to delete her photographs.

‘My faith …led me to write’

Barely five feet tall and soft-spoken, Woeser said in a 2006 interview with Radio Free Asia that she will never stop writing.

“Though my blogs are shut down,” she said, “they cannot stop my speech and my writing.”

“My faith in religion and love for Buddhism largely led me to write. While I was working in an office in Lhasa, I was paid well. But I never felt free, and it bothered me… When I was fired from the job, the incident led me to freedom to express myself in writing.”

Envisioning the past in her poems, Woeser evokes a lost Tibet of undisturbed mountains and monasteries. Then she brings us up to date with images that clash with China’s official depiction of Tibetans as singing, dancing natives hungering for consumer goods.

In her poem “The Past,” Woeser yearns for a Tibet of snow-clad mountains and fluttering prayer flags under divine protection: 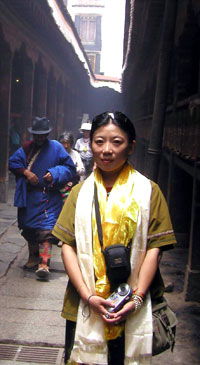 Fortunately, translator A. E. Clark provides 45 pages of notes at the end of the book. One learns when an eagle symbolizes the Dalai Lama, or when a sarcastic remark alludes to Chinese genre movies.

But sometimes the poems are amazingly direct.

In “Tibet’s Secret,” Woeser likens reading the memoir of Palden Gyatso, a monk who served 33 years in prison, to “watching the creatures of the Land of Snow trampled to dust by foreign jackboots.”

In this long poem, Woeser describes the ordeals of a number of political prisoners, including 14 “singing nuns” who composed songs about prison life and recorded them with a smuggled tape recorder.

Of these nuns, one jailed at age 12, she writes: “I am only wondering why the nuns in that prison, mere teenagers, are not afraid.”

The poem “Of Mixed Race” sums up Woeser’s journey from a daughter of the elite to a critic who has rediscovered her roots.

She describes a “a night of rebellion at the close of her youth” in which “hot tears” annul her earlier stance.

In the preface to Tibet’s True Heart, A. E. Clark provides the reader with useful background.

As the daughter of a senior Chinese army commander, Woeser had been taught that “the old Tibet was dark and backward,” and that when the People’s Liberation Army invaded Tibet in 1950, it brought a better life.

But as she explored Tibetan culture, Woeser found herself attracted to Buddhism, “of which she had known virtually nothing in childhood.” She then discovered that China’s Cultural Revolution, which exploded in the year of her birth, had done much to destroy that culture.

Woeser also discovered that her father, the PLA commander, was a closet Buddhist. She remembers her astonishment one day at her parents’ home in the 1980s at seeing him in full military dress go “down on one knee before the Panchen Lama,” the most revered spiritual leader then remaining in Tibet.

Later, Clark notes, Woeser “realized that trips on which her father had taken her mother, ostensibly for her health, had all been pilgrimages.”

When Woeser was forced to leave the Tibetan capital last month, she wrote a chilling poem about the intimidating presence of troops and police there, “The Fear in Lhasa.”

When she posted the poem on her blog, she added a parting shot: