China’s crackdown brings it all back to me 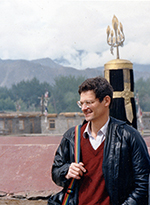 Southerland at Jokhang temple during a quieter time in 1988. Photo: RFA Photo: RFA
I had flown into Lhasa for the first time in early October 1987 to report on protests led by Buddhist monks that turned into a riot.

A stone-throwing mob had assaulted a Chinese police station and burned it down. The building was still smoldering when I got there.

The police set up roadblocks around the city, cut off phone and telex connections from Lhasa, and began to expel foreign reporters.

I was Beijing bureau chief for the Washington Post at the time and had never been to Tibet.

But I knew that the monks’ protest—and the ensuing riot—were remarkable. Nothing like this had occurred in nearly three decades.

This was a big story. And I managed to get to Lhasa in time to interview a few Tibetans and foreign travelers before the police could begin locking the city down.

But I had a problem. I couldn’t get my story out either by telex or phone. 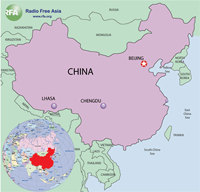 Chengdu was the jumping-off point for flights to Lhasa. RFA map. Photo: RFA
This was the pre-cell phone era. I had to go through the Lhasa post office or Chinese hotel telephone operators who were blocking calls by foreigners from Lhasa.

With communications cut off, I had to leave Lhasa for Chengdu, nearly 1,500 miles to the east in China’s Sichuan province, in order to make phone connections with my home office. I was gambling that I could file my first couple of stories and then get back into the Tibetan capital.

In fact, I managed to get back into Lhasa using a foreign tourist’s air ticket. She had decided not to go to Lhasa because the situation appeared to be too dangerous.

My heart began beating faster when I handed my ticket and passport to the police officers at the Chengdu airport who were checking all tickets to Lhasa. The government had ordered that no new tickets be issued but were honoring tickets that had already been purchased.

Fortunately, the policewoman who looked over my documents didn’t notice that the name on my passport failed to match the name on my ticket. If I recall correctly, the name on the ticket was MacDonald--not even close to Southerland.

Arriving at the Lhasa airport, I saw two planeloads of Chinese troops disembarking in order to help bring the city under control.

After I got off the airport bus in the city, someone tipped me off that the remaining foreign reporters were at that moment being rounded up from Lhasa’s one luxury hotel, the Holiday Inn, and taken to the airport to be expelled.

Drepung monastery. Tibet’s largest monastery was surrounded by Chinese police in October 1987. Image courtesy of Wikipedia Photo: RFA
I put on a floppy hat and beads, rented a bicycle, and headed for the cheapest, least luxurious hotel that I could find.

The Snowlands Hotel had no heating. A room that I shared with a Newsweek colleague was next to a hole-in-the-floor toilet and stank of urine. The two of us shivered through the night.

But at least the police didn’t bother to look for foreign reporters in that forsaken hovel of a hotel.

With the police in control of much of the city, the foreign tourists still hanging on there in low-end hotels turned out to be valuable sources of information. Many had made friends with local Tibetans, and they were there to witness both the outbreak of violence and the crackdown that followed.

They were an interesting bunch of backpackers, climbers, and idealists who wanted to get to know the real Tibet. But they were growing increasingly nervous about police surveillance.

Two of them, John Ackerly, a Washington lawyer, and Blake Kerr, a recent medical school graduate, were detained by the police for questioning and then ordered to leave China.

Kerr told me that he had been treating wounded Tibetans and “sneaking into temples at night, climbing over walls, and taking a non-ordinary route if possible.”

I took to meeting people in bathrooms, which we figured were not bugged.

“Is that you, Dan?”came the voice in one hotel bathroom, where a man in a floppy hat stood next to me at the urinal.

I recognized him as one of the Tibet travelers-turned-human-rights advocates.

“I can get you into Drepung,” he said, referring to the largest monastery in Tibet, located more than three miles west of Lhasa and now surrounded by the police.

We bicycled under a cobalt-blue sky to Drepung and my new friend showed me how to get into the monastery by climbing over a wall.

“Where are the police?” I asked an older monk.

“Outside having tea,” he replied.

I peeked over the wall and saw about 50 plainclothes policemen drinking their tea.

That allowed me just enough time to talk with half a dozen monks over their own yak-butter tea. They told me that Chinese officials were subjecting them to interrogation and endless “educational” meetings, much like the meetings that must be occurring in Lhasa today.

“We want to demonstrate, but there are too many police,” said one young monk. “We have heard that the police are saying they’ll kill us next time.”

Exhilarated over my success in getting past the police at Drepung, I decided to try to get into another large monastery that was under police control, Sera, just north of Lhasa.

I was told that altitude sickness might knock me off my feet. Lhasa is at 12,000 feet. It didn’t happen.

Accompanied by a French colleague, I climbed a forested hill toward Sera monastery, but this time policemen with binoculars spotted us. They shouted. We turned and ran back to a main road where we were able to mount our bicycles and escape.

In 1987 as today, the Chinese government’s response to Tibetan protests and uprisings followed a pattern of arrests, interrogation, intimidation, and “re-education.”

And, of course, then as today, the authorities blamed the Dalai Lama for instigating violence. They also claimed to have evidence.

But the uprising in 2008 has been much more widespread than any previous unrest in nearly 50 years. And the crackdown is ultimately likely to be more severe.

In today’s Lhasa, I don’t think I could get away with the cops-and- robbers game that I played two decades ago