On June 5, 1989 a lone man stood in front of a column of tanks and came to symbolize the Chinese people's resistance to the crackdown at Tiananmen Square. Hundreds of Chinese had been killed the day before, and, to this day, authorities would like them forgotten.
Dan Southerland, Executive Editor
2009-06-03
Tweet 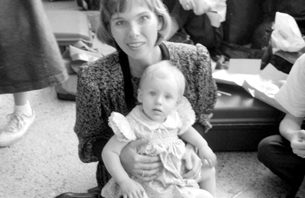 For a brief period after the army drove the remaining students from Tiananmen Square, Beijing citizens resisted the crackdown.

At one point on June 5, a lone man standing in front of a column of tanks came to symbolize that resistance.

But brute force won out. Many citizens suffered in silent rage.

Rumors of splits in the army spread through the city, and diplomats came to believe that a number of army commanders had disagreed with the decision to use lethal force against unarmed civilians.

We were able to confirm that the commander of the 38th Army, Xu Qinxian, had refused to lead his troops against civilians, and that he was later court martialed. 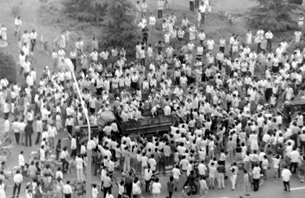 From their apartment compound, the Southerland family could see crowds blocking army trucks and disarming “workers” sent in by the government to disrupt the protest, June 3, 1989. RFA
Before the crackdown, many of the troops we saw appeared to be frightened and hesitant, unable to comprehend why so many Beijing citizens were determined to halt their advance. Judging by their accents, many appeared to be from rural areas located far from Beijing.

But once the crackdown began, the army and security police moved with swift brutality.  They were told that they faced a “counter-revolutionary rebellion.”

The PLA officers we observed through binoculars from an apartment overlooking the Second Ring Road were not happy to see us watching them. At one point, an officer shouted over a bullhorn: “Step back or we’ll shoot!”

On June 6, my wife Muriel and our two children, Matthew and Shauna, joined in an evacuation of foreigners from Beijing. They stayed that night at a hotel near the airport and then flew to Hong Kong on June 8. They did not return to Beijing until more than two weeks later.

On June 7, PLA soldiers opened fire on our apartment complex. I was grateful that my wife and children were not there to hear the sound of automatic weapons pounding buildings housing hundreds of diplomats, foreign journalists, and their families.

The martial-law command later claimed that a sniper had been operating against Chinese troops from inside the Jianguomenwai Diplomatic Compound.
But Western diplomats concluded that the troops were under orders to fire into military attaches’ apartments and to discourage them, as well as foreign correspondents, from observing and photographing PLA maneuvers.

By the time that Muriel returned to Beijing, the crackdown was complete, and the government was blaming foreign “hostile forces” for having incited the Tiananmen protests. 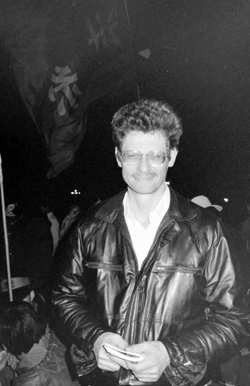 Dan Southerland on Tiananmen Square on the eve of martial law, May 19, 1989. RFA
On July 4, to mark the one-month anniversary of the June 3-4 killings, Muriel and a friend, a China scholar, biked to Tiananmen Square to place two white roses on the Square in honor of those who died. But they found it difficult to find a spot unguarded by soldiers or policemen.

At the Beijing Concert Hall one block west of the Square, a few people pointed to sites where citizens had been killed. But they spoke only in whispers. The Concert Hall had been hit by numerous bullets on June 4. Fear was still in the air.

Once darkness descended, the two friends finally found a spot at the foot of a tree, one of many growing along a street just east of the Square.

Soldiers still seemed to be everywhere, with only the glint of their bayonets giving some of them away. Feeling the pressure of an evening curfew, but under the protection of darkness, the two women stopped their bicycles and put down their flowers.

The two felt that their gesture was intensely personal.

But they hoped that someone would take note of the flowers and remember.