From Hope to Fear

A soldier placed an army hat on a child's head, and the child happily saluted the crowd. No one knew what was coming, writes Dan Southerland, as he recalls the eve of a brutal crackdown in Beijing.
Dan Southerland, Executive Editor
2009-05-29
Tweet 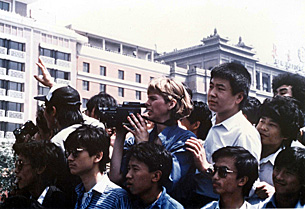 Muriel Southerland shooting video of demonstrators northeast of the Square near the Beijing Hotel, early May 1989.
RFA
My wife Muriel was pushing our 15-month-old daughter in a stroller through a Beijing crowd about two hours before the shooting started.

It was a stifling night in Beijing on June 3, 1989. At around 7:30 p.m., crowds on the Avenue of Eternal Peace were still trying to convince soldiers of the PLA, the People’s Liberation Army, that they should not harm the people.

China’s capital had been under martial law for two weeks. But the people of Beijing had twice formed human barriers to block the troops from reaching Tiananmen Square.

Now things seemed to be at a standstill at the junction of the Avenue of Eternal Peace and the city’s Second Ring Road.

Citizens from the local neighborhood were handing out food and soft drinks to soldiers packed into army trucks.

Muriel and an American friend, who was pushing her son along in another stroller, saw someone in the crowd lift a little boy, perhaps five years old, into the back of one of the army trucks filled with troops.

A soldier placed an army hat on the child’s head. The boy then saluted the crowd, and everyone cheered.

It was a sweet moment before the storm.

No one knew what was coming next. 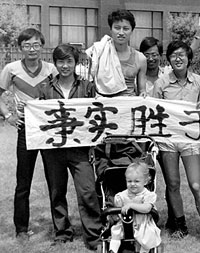 Shauna, 15 months, outside the Chinese Academy of Social Sciences. A banner urges China’s leaders to avoid empty rhetoric and face facts, May 28, 1989. Muriel Southerland/RFA
As Muriel later recalled, no other foreigners were to be seen at that spot near the Jianguomen overpass as she and her friend moved among the laobaixing, the term often used by Chinese to describe ordinary people. Many foreigners remained inside their apartments. But at that moment, the two of them felt no fear.

Demonstrations had occurred throughout the center of the city in support of protesting students on Tiananmen Square for a period of six weeks. But they had for the most part been orderly.

The story on the street was that the crime rate had gone down and that thieves had stopped picking pockets, in effect saying, “we, too, are patriotic. We support the students.”

I was Beijing bureau chief for The Washington Post, managing a small team of Chinese-speaking reporters and taking calls from them and colleagues in and around Tiananmen Square.

I was not worrying about Muriel and her friend. Muriel had been on the streets and the Square taking photographs and shooting video nearly every day during the demonstrations. She had encountered no problems.

The normally hard-bitten citizens of Beijing appeared to be more open and friendly than ever.

They seemed to be inspired by the students who were calling for “democracy,” press freedom, and a halt to “official profiteering.”

I had asked Muriel to bring back some quotes for me from the laobaixing.

“It was awe-inspiring to be among these people,” Muriel later recalled.

But at 8:30 p.m., an elderly Chinese man approached Muriel, looked at our daughter Shauna, and said, “Your baby is asleep. You should go home.”

Then at a different spot in the crowd, an elderly woman said almost the same thing.

It had been the first time in six weeks that anyone had advised Muriel to leave the Square or the avenues leading to it.

Muriel and her friend returned to our apartment building complex. We were located about three miles east of Tiananmen Square. 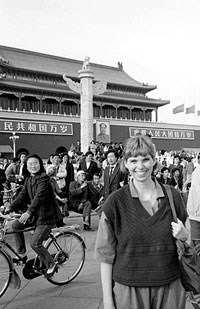 Muriel Southerland at Tiananmen Square during the early stages of the student demonstrations, April 27, 1989. RFA
At around 10:30 p.m., the first violence erupted about five miles west of the Square.

Armored personnel carriers smashed through a line of buses blocking an intersection. Troops began firing indiscriminately. As the army advanced, hundreds of civilians were killed.

In one of the most authoritative books on Tiananmen, Black Hands of Beijing, George Black and Robin Munro describe how the killings at the circular intersection at Gongzhufen set a pattern for the night’s violence:

“Random and brutal killings by the PLA came first, followed swiftly by a small number of revenge killings by distraught, and increasingly insurgent, citizens.”

Munro, who spent the night on Tiananmen Square, saw no massacre on the Square on the night of June 3, but concluded that a bloodbath did occur along the approach roads.

By 1:15 a.m. on June 4, the first PLA units had reached the Square. Within a few hours, student leaders agreed to leave.  The army smashed worker and student tents and destroyed the Goddess of Democracy statue that art students had erected on the square.

Shortly after 5 a.m., exhausted students began filing out via the southeast corner of the Square, the only area that was left open by the surrounding troops.

All day on June 4, we heard the roar of tanks and armored personnel carriers as they headed toward the Square and took up positions near our apartment complex.

The killing of civilians continued. Some were shot as they headed for the Square, defying warnings shouted over bullhorns by army officers ordering them to halt.

Some were attempting to find missing student protesters. Those protesters were their children.

Dozens of journalists, including a reporter working for me, witnessed these shootings on the Avenue of Eternal Peace northeast of the Square near the Beijing Hotel.

Jonathan Mirsky, correspondent for The Times of London, later described these killings as “the real massacre.”

Overnight Beijing had gone from a city where a mother could stroll with a child through crowds numbering in the tens of thousands to a city of empty streets—a city of fear.