BEIJING—I have to pay 12 yuan for my pork dumpling and soy-milk breakfast in a small restaurant this morning. Customers grumble that prices have gone up too fast.
Sun Ling
2008-08-12
Tweet 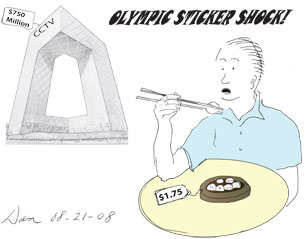 >>> View the cartoon in pdf file

Actually, 12 yuan for breakfast isn't too bad compared to prices in Hong Kong and the United States. It comes to about U.S. 1.75. But when you factor in the average salary of Beijing residents, you will agree with the customers saying, “Things here are too expensive now.”

One-tenth of your daily salary has to go for breakfast. According to Beijing Municipal Bureau of Statistics figures released in March, the average monthly salary for Beijing’s working class is only 3,000 yuan. And Beijing maintains the highest per-capita income in China.

My friend has been working in Beijing for six years but says she is tired of living here and is considering moving to Shanghai. Her office is downtown, next to the China World Hotel. During the last two years, the new CCTV building and the Beijing TV station at Guangwhan Road were being built just across from her office. Because construction had to be rushed to accommodate the Olympics, the noise of building went on day and night, and the surrounding areas were in terrible shape. She questioned why CCTV and Beijing TV had to occupy such a large and valuable part of Beijing.

Reading the Beijing Youth Daily after breakfast, I find that the paper carries news of the bombing attacks in Xinjiang on Aug. 10.

At night, I go to Tiananmen Square. It's like a carnival, with tourists from across the country and around the world flooding the place. A few thousand people fill the square, even though it is 9:30 p.m. People with bags have to pass through a security check. More than 20 police cars and a hundred armed police guard the Square.

A large bed of flowers and grass surrounds the Square’s center. It is hard to know if any images of the June 4 Tiananmen Square massacre remain in people’s minds.

“Can you take a picture for me?” a young man asks. After taking his picture, I stop to chat. He is a high school student from Jiangxi. He came to Beijing to visit his parents, who have opened a small shop. It is typical in China that parents must go to the big cities to work while their children remain home in the villages. This young man is lucky that he has a place to stay during his visit. He will leave his parents soon and go back to Jiangxi.

He's so excited that he can experience first-hand the Olympic spirit in Beijing. I ask if he has seen any of the games. “I lined up for two days for a ticket, but could not get one,” he says. “So many Chinese want to get tickets.” So he has had to watch the games at home.

We talk about the basketball game between China and Spain. We are both disappointed that China lost the game. “China was leading in the first 30 minutes, but it still lost. I am so sad,” the young man says.