Beijing Puts Another Brick in the 'Great Firewall' 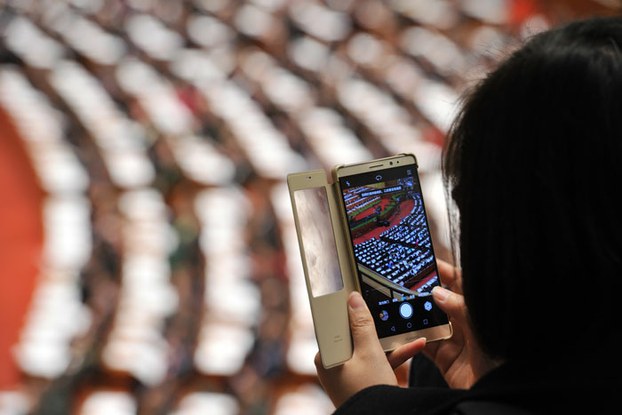 A journalist uses a smartphone to photograph deputies attending the second plenary meeting of the Fourth Session of the 12th National People's Congress at the Great Hall of the People in Beijing, March 9, 2016.

As the National People’s Congress convenes, the Chinese government is attempting to plug the hole virtual private networks have drilled through the “Great Firewall” as Beijing shores up the complex system of blocks, filters and human censorship the government uses to control speech on the Internet.

Many Internet users in China rely on VPNs to get around the "Great Firewall," the nickname used for the barriers Beijing erects to limit the content users in the country can see -- including sites from overseas media organizations and other politically sensitive content.

Guangzhou-based rights activist Jia Pin said he has been unable to scale the Great Firewall for the past week.

"I used to use ... software that worked really well, and never had any problems before, but I haven't been able to climb the wall in the past week or so," Jia told RFA's Chinese Service. "The VPN isn't working very well either, especially in Guangzhou, where the problem seems to be worse."

Jia said many of his friends reported similar problems.

"I think it's to do with the parliamentary sessions ... because I've never seen this before," he said.

"It's still possible to get around because I have several different VPNs, and I can switch between them," Liu said. "But sometimes it's hard to connect to the VPN server, or the connection needs to be repeatedly reset."

Informal speed testing carried out by the Tips for China blog showed varying speeds, with many VPN services blocked on Sunday, the second day of the annual session of the  National People’s Congress, the blog reported in an update on Thursday.

The blog also reported intermittent service and slow speeds on VPNs run by VyprVPN and ExpressVPN.

One service provider cited the annual parliamentary sessions in Beijing as the reason for the problems.

"Due to political meetings in Beijing, VPN access from China may be limited," the Astrill virtual private network service tweeted ahead of the National People's Congress annual session, which runs from March 5-15.

"We ask for your patience. Thanks for understanding," the tweet said.

One Twitter user commented: "@astrill, I did not sign up for a two year contract for this … already without VPN for one week in China! Has affected my business, not happy."

While Beijing may be trying to stonewall VPNs, other Internet services are also getting blocked.

Its website, scmp.com was blocked China on Thursday, according to an online analysis by GreatFire.org, while the paper's Chinese-language news site nanzao.com showed contradictory results.

The SCMP's official accounts on the Twitter-like services Tencent and Sina Weibo returned an error page, with users reporting no visible posts on its page on the smart phone app WeChat.

"This account has been closed, and the contents are not viewable," a message on the SCMP's WeChat account page said on Wednesday.

Among the points was an order to "strictly control negative reports in new media," according to a translation of a leaked memo published by the China Digital Times website.

The CPJ based its report on leaked censorship logs obtained from a former employee of the company, which list some four pages of dos and don'ts for censorship staff working at the company between April 2011 and late 2014.

Reported by Qiao Long for RFA's Mandarin Service, and by the Cantonese Service. Translated and written in English by Luisetta Mudie.

Hi VPNWorksForMe,
I think you are right but there are still some like my vpn provider that knows how to run their business. Been with Astrill for few months now and so far so good.

I think most of the known VPN companies are run by idiots, that is why their customers are always complaining. I have been using VPN in China for 2 years by a lesser known vendor, and have never been down a single day.

For those complaining about VPN speed, here is an interesting speed test video on youtube. It shows 50 Mbps over a US VPN from China. Its not fake because I can see the ping time is > 150ms as it should be when using VPN from China to US.

Again and again, the Communist Regime wasted hundreds of $billion of dollars trying to stop freedom so they could hold on to power and be in control.

This $billions and $billions could be spent on healthcare and education instead of wasting it.