A GPS “to protect the passengers”

BEIJING - It is sunny when my plane touches down at the new Beijing Airport, but the sky is blanketed with grey smog. The Beijing government has been trying very hard to at least temporarily clean the environment. The result is not obvious.
Sun Ling
2008-08-11
Tweet 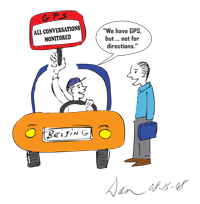 
I did not expect that tight visa and security controls would reduce the number of passengers at the airport. The departure lobby is almost empty. In fact, at 2:30 p.m. on the first working day in Beijing since the start of the Olympics, we are the only passengers waiting at baggage claim. Two big Olympic mascot “Fuwa” balloons have been placed at the airport exit to welcome tourists to Beijing.

In the past, passengers have had to wait at least a half hour to get a taxi at busy times, but now I can get one right away.


The driver says with an apologetic smile that he doesn’t know the way to my hotel. I ask if his taxi has had GPS installed. “Yes,” he says, “we have GPS, but this is not for directions. It is only to protect the passengers.” He explains that all our conversations are being monitored by the control station.

If I were a robber, the control station would know this even if the taxi driver had not pressed an emergency button. All the taxis that I ride so far are very clean and have no barrier between the driver and passenger. Is Beijing safer now? I don’t know, but it seems to be.

Today is the 11th, so only cars with odd-number license plates can be out on the road. There is no traffic from the Beijing airport to downtown.

Police in every block


As I walk around the Wangfujiang Street area downtown, I can see police in every block. Police cars drive by and are parked everywhere. It seems as if a third of Beijing’s pedestrians are foreigners, since most of them hang official Olympics entry permits or volunteer badges in front of their shirts.

I see two young foreign backpackers with sweat on their faces looking at a map near the Beijing Hotel. They seem unwilling to ask for assistance in spite of the many volunteers who can be seen on the street. I approach them and ask, “Do you need any help?” One of them tells me they can not find their hostel and shows me the address. I tell them that it is still far away on foot and ask them why they do not take a taxi. This should cost them only 10 yuan.

The woman replies that they tried this, but the driver asked for 60 yuan. They said they would rather walk with two heavy backpacks—60 pounds each, at least, I think. They are from England, but they have found it difficult to ask for directions in English. I show them the way to go and wish them good luck.

China is still at the top of the gold medal list today.