The “old road” of Internet censorship

BEIJING - I have tried to access some “sensitive” Web sites—such as the Chinese Web pages of BBC, VOA, Amnesty International, and of course Radio Free Asia (RFA)—during the past few days, but have had no success.
Sun Ling
2008-08-13
Tweet 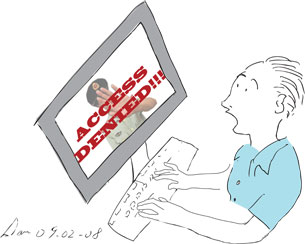 “I have missed some human-rights news ...”
Graphic: RFA

>>> View the cartoon in pdf file

Not only can I not find the Chinese Web page of RFA, but I can see only the headline of the lead story on the English Web page of RFA, and not the other stories. And when I look for details of the headline story, I get a message: “The site cannot be found.” So I have missed some human-rights news during the last few days. So have other Chinese people on the mainland.

Just a few days before the Olympics, many international reporters complained to the International Olympics Committee (IOC) about this situation. The IOC said they would talk to the Beijing Olympics Committee (BOC), and the BOC promised not to set any restrictions on the Internet for reporters. That promise was kept for only a few days, and then they went back to their “old road.”

I want to take the newly built high-speed train from Beijing to Tianjin today, but decide to give up. I go to the new Beijing South Railway Station at 1:45 p.m., but tickets are available only at 4:35 p.m. Five trains are scheduled in the meantime, but all are full. Each train can carry 600 passengers, and around 3,000 people want to go to Tianjin ahead of me. This station opened on August 1 in order to link with Beijing’s sister city, which hosts Olympic football games from August 6-15. This reduces travel time from 70 minutes to 30 minutes. It is said that this train is the fastest in the world, running at 350 km per hour while Japan and Spain have high-speed trains that run at only 320 km per hour. I do not want to spend a few hours waiting in the railway station, though, so I give it up.

No toilets for handicapped

But I do walk around the enormous station lobby. It is almost bigger than Dulles Airport in Washington D.C. and will eventually be connected to the subway. The waiting area is clean and comfortable. The automated ticket machines are user-friendly. But the toilets in the restroom are all squat toilets, with no handicapped facilities. This was thoughtless of those who designed this highly sophisticated and modern building. My friend went to watch the Olympic tennis match at the newly constructed Beijing Olympic Green Tennis Court yesterday and said the situation there is better than that at the train station. Most of the toilets there are squat toilets, too, but there are two compartments for use by the handicapped. You can tell from this seemingly minor and often overlooked point how the handicapped here are neglected by the authorities. China’s economy is booming. So why can’t we open our hearts to those in need?

Most Beijing residents stay home to watch the women’s volleyball game between China and Cuba tonight. China leads in the first two parts of the game and in the beginning of the third part. Then the game turns upside down, and China loses. Some people in Beijing say that Chinese athletes cannot handle their emotions or keep them in check. For me, though, it is a wonderful game to watch.