China Banks on Ski Resort at The Top of The World 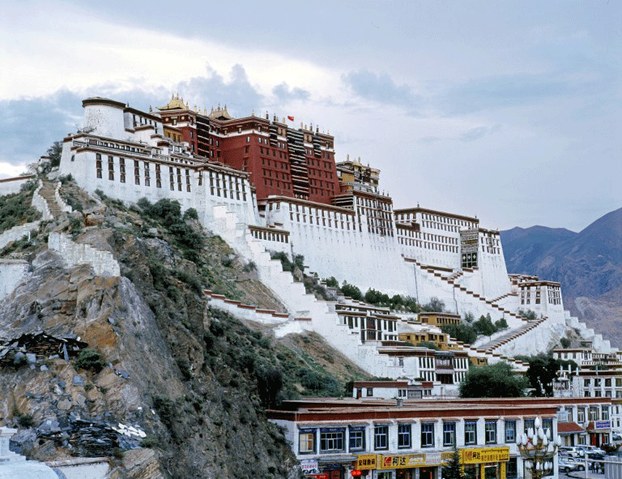 The Potala Palace in Lhasa in a file photo.

Beijing’s plan to build the world’s highest ski resort near the Tibetan capital of Lhasa is raising concern among some environmentalists who wonder why the Chinese would build where there is little snow.

Nestled in the Himalaya Mountains at nearly 12,000 feet, the capital of the Tibet Autonomous Prefecture is the perfect spot for a ski resort, China feels, but Tenpa Gyaltsen, director of the Environmental Section at the Tibet Policy Institute tells RFA’s Tibetan Service there is little snowfall there to support a resort.

“In the official Chinese news it is stated that the resort will be developed near Lhasa, but there aren’t any snow mountains near Lhasa,” said Gyaltsen, who is based in Dharamsala, India. “If they transport the snow from somewhere else, how would this impact Tibet’s melting glaciers?”

The ski resort is included as an important part of China's 13th Five Year Plan, the state-linked China Daily reported on Feb. 24. Approved this week by the National People's Congress, it is another example of the nation’s hopes for its ski slopes.

China is estimated to have 450 ski resorts, and the country is banking on the 2022 Winter Olympics in Beijing to give snow sports a boost, according to reports.  The Jade Dragon Snow Mountain resort near Lijiang in southwestern China's Yunnan province is the current record holder for the world’s highest ski resort.

Snow is not Gyaltsen’s only concern. As usual with Chinese development projects in the region, information is difficult to find, he said.

“Lack of transparency and accountability for Chinese developers is a major source of problems both in Tibet and China,” he said.  “It is important to know who the stakeholders are, and if this project will be tainted with corruption as is the norm on many others.”

There are also questions about who will ultimately reap the benefits of the resort, Gyaltsen told RFA.

“While any development that benefits the Tibet region is welcome, the concern is whether the Chinese developer has done any professional risk assessment and the required study that takes into account the long and short-term geosocial, cultural, and environmental impact of such a project,” he said.

“The main purpose of such project is for economic benefit,” he added. “But how much will the local Tibetans benefit?”

"With an average altitude of 4,500 meters above sea level, Tibet is rich in unique natural resources for ice and snow sports," Nyima Tsering, deputy director of the region's sports bureau told the China Daily.

A contract has already been signed between the sports bureaus of Tibet and China's Heilongjiang province to aid in the training of Tibetan talent, China Daily reported.

Tsering contends that a ski resort near Lhasa will encourage young people to take on a winter sport.

"Just as China is new to the winter sports game, Tibet also has a long way to go," he told China Daily, adding that he hopes "to see the faces of Tibetan skiers" at the 2022 Winter Olympics.

Reported and translated by Dorjee Damdul. Written in English by Brooks Boliek.