BEIJING—Rain pours down heavily beginning at noon. The streets are still jammed with volunteers and with foreign and local tourists. It is really difficult to walk with my umbrella around the puddles on the pavement.
Sun Ling
2008-08-14
Tweet 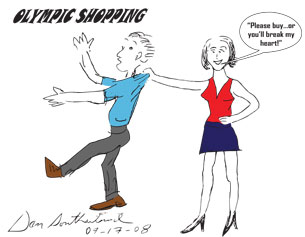 Yesterday, I went to the Silk Market. I had wanted to go sooner, since I read that it was regarded as big news here that former President Bush visited the market Aug. 11 along with Anne Rogge, the wife of Jacque Rogge, chairman of the International Olympic Committee. Bush gave a thumbs-up in front of the cameras in the market and spent 800 yuan for six silk nightgowns.

Mrs. Rogge spent a few hundred yuan for a Chinese-style jacket and some other things. Since the Olympics opened in Beijing, the market has been visited by four presidents and 11 first ladies.

When I was posted in Beijing as a correspondent five years ago, I lived just next to the Silk Market, which was full of vendors selling all kinds of things. It was infamous for selling “pirated” products. I went there now to see if there had been any changes.

Nothing has changed in the new five-storey market. Most of the shops sell pirated goods, and you can tell what brands are popular in China just by walking around for a few minutes. The current fashionable brands are Max Mara, of course, and Polo-brand shirts and T-shirts.

It would have been impossible for former President Bush, Mrs. Rogge, and the other presidents and first ladies not to notice the pirated products. But maybe the authorities played some tricks during their visits that they might not have known about. I have no way to know.

Ninety percent of the shops hire good-looking sales girls who are around 18 to 20 years old. These enthusiastic young girls touch or hold your hands, saying “Please don’t go away,” “Please buy or you'll break my heart.”

They do not speak in Mandarin but in English, Italian, Russian, Spanish, and other languages. They are very well-trained sales ladies. Sometimes customers can bargain a product’s price down from 100 yuan to 20 yuan. It depends on your bargaining skill.

This morning, I receive an e-mail from a Beijing correspondent, an old friend, with whom I had breakfast just yesterday. She tells me that someone followed her to her office and even stood for a while in front of her apartment. She lives in a five-star apartment with tight security, so how could this man get in? Maybe just by showing his “pass”?

My friend says it is obvious that he is some kind of state security officer. They want to signal my friend, and me, that they know about our meeting and that we have to behave ourselves during our stay in China. I apologize to my friend for the trouble, and she says, “As a reporter in China, I have to be prepared for this. Don’t worry.”

Du Li of China wins the gold in the 50m rifle competition today. She disappointed many mainlanders last Saturday, when everyone thought she would be the first to win a gold medal for China. She cried so much at that time. Now, she can smile.