Just Rescued, and Hurrying Back

Lin Di goes to Beichuan Qiang in Sichuan and meets an earthquake survivor rushing back to search for her father.
Lin Di
2008-05-21 - Mianyang, Sichuan
Tweet 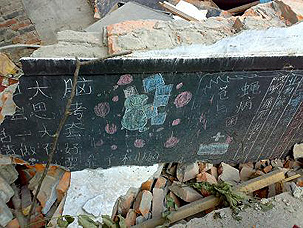 I visit the Beichuan Qiang autonomous prefecture, northwest of the city of Mianyang in Sichuan province. Beichuan lies on the same fault line as Pingwu. It is one of the worst-hit areas and has sustained heavy loss of life and damage to property. A fellow passenger on the bus is a Beichuan native who was airlifted out of the small township of Zhicheng, in Beichuan, only yesterday.

"Why are you hurrying back to Beichuan, since you just got rescued?" I ask.

"To look for my dad. When a disaster like this strikes, the most important thing is family," she says. "My dad is a worker. He was working on the streets in open air when it happened…  I don't know if he's dead or alive. He may be buried underneath."

"She describes the situation in Zhicheng township: "Between 100 and 200 people died there.

They took the dead bodies to the woods, dug a hole, lined them up, and buried them there. But one person was still breathing, barely...They put him on a pile of leaves in the woods...He eventually died...But he was not buried for another five days or so. The place reeked...You know, two of the paratroopers that rescued me were themselves injured upon landing...Their parachutes failed to open."

Beichuan High School is about two kilometers from the center of the city. The authorities have cordoned off the whole area and set up a relief work command center at the high school.

Beichuan High School itself sustained heavy damage as well. Not a single building has been left intact. Among the ruins, survivors line up to receive pots, pans, spoons and other utensils.

A commander of the rescue operation tells me that only a handful of structures are left standing in Beichuan; the rest is just a pile of rubble. "The city of Beichuan no longer exists," he says.

Disinfecting the area to prevent an epidemic from occurring is the main task of the rescue workers, I am told. The overwhelming majority of the people at the command center wear masks.   On this – the 10th day – since the quake hit, their top priority is disease prevention...There are no longer any survivors being found."

Lin Di is a pseudonym to protect the reporter and his family. He reports for RFA's Mandarin service and filed this notebook on assignment in Sichuan.