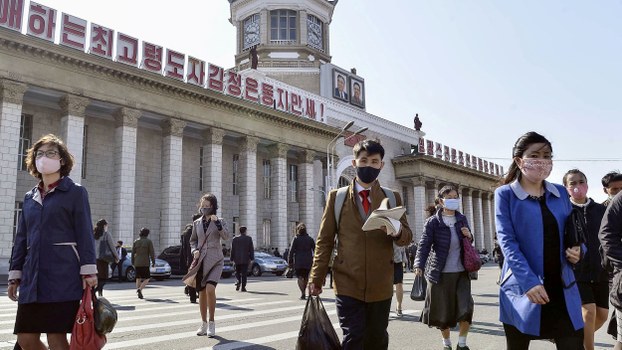 People wearing protective face masks walk amid concerns over the coronavirus in front of Pyongyang Station in Pyongyang, April 27, 2020.

Measures taken by North Korea to prevent the coronavirus from entering its borders have severely impacted trade, which in turn has increased widespread food insecurity in the country, while putting its citizens at risk of heightened rights violations, according to a United Nations expert.

North Korea has still not reported a single confirmed case of the coronavirus. Though the country maintains outwardly that it is virus-free, the government has announced in public lectures to citizens that the virus was in April spreading in three areas of the country, including the capital Pyongyang.

North Korean and its biggest trading partner China in January closed down their entire 880-mile border and suspended all trade to prevent the spread of the pandemic, while Pyongyang has also ordered travel restrictions between North Korean cities and regions, strict quarantine measures, and reduction of humanitarian operations.

In a report released Wednesday, Tomás Ojea Quintana, the United Nations Special Rapporteur on the situation of human rights in North Korea, said such measures have had “a devastating impact on trade which has increased widespread food insecurity, the risk of starvation, and had a negative impact on an undernourished population, in particular children.”

“This crisis highlights historic economic hardships facing people in [North Korea], worsened by the most severe sanctions regime and the increasing number of natural disasters. Under the unprecedented situation of the COVID-19 pandemic, the Special Rapporteur believes that the international responsibility for re-evaluating the sanctions regime is more urgent than ever.”

Additionally, the report said, continued surveillance and control over the population in the North, and decreased contact with the outside world during the pandemic “could exacerbate entrenched human rights violations,” leading to more restrictions on freedoms, increased discrimination, and more aggravated treatment in detention.

Quintana urged the North to avoid further isolating itself from the international community, saying no single country can avoid the consequences of the pandemic. He said Pyongyang should instead engage with other nations in cooperation, including through the sharing of expertise, medicines, and health care equipment, as well as in other relevant areas, “including human rights.”

The Special Rapporteur noted that he was not invited for an official visit to North Korea, nor was he able to travel to the South or other neighboring countries since December due to pandemic-related travel restrictions. However, he based his conclusions on information obtained through online meetings with victims of rights violations, civil society organizations, U.N. agencies, and governments.

He called on the North to urgently invest its maximum available resources in ensuring people’s basic need for food, water and sanitization and to housing, while also assessing the impact of measures to prevent the spread of the coronavirus on people’s exercise of human rights.

Quintana’s report came as 33 human rights organizations operating in South Korea and around the world sent an open letter to the U.N. and the European Union on Thursday, calling on them to highlight a wide range of human rights violations in the North—including the use of political prison camps, arbitrary executions, sexual violence, and forced repatriation—in a resolution expected to be adopted by the 75th U.N. General Assembly in Geneva.

The groups, which included U.S.-based Committee for Human Rights in North Korea (HRNK) and South Korea’s Transitional Justice Working Group (TJWG), specifically mentioned Pyongyang’s need to abide by the right to life and physical safety in dealing with the pandemic following the shooting death of a South Korean official found adrift in waters near the countries’ disputed border by North Korea’s military late last month.

The shooting victim was an official with South Korea’s Ministry of Oceans and Fisheries. He had gone missing while at sea on Monday and was spotted in the water north of the maritime border with a life jacket and a floatation device.

The U.N. General Assembly has adopted a resolution on North Korean human rights in December every year since 2005. 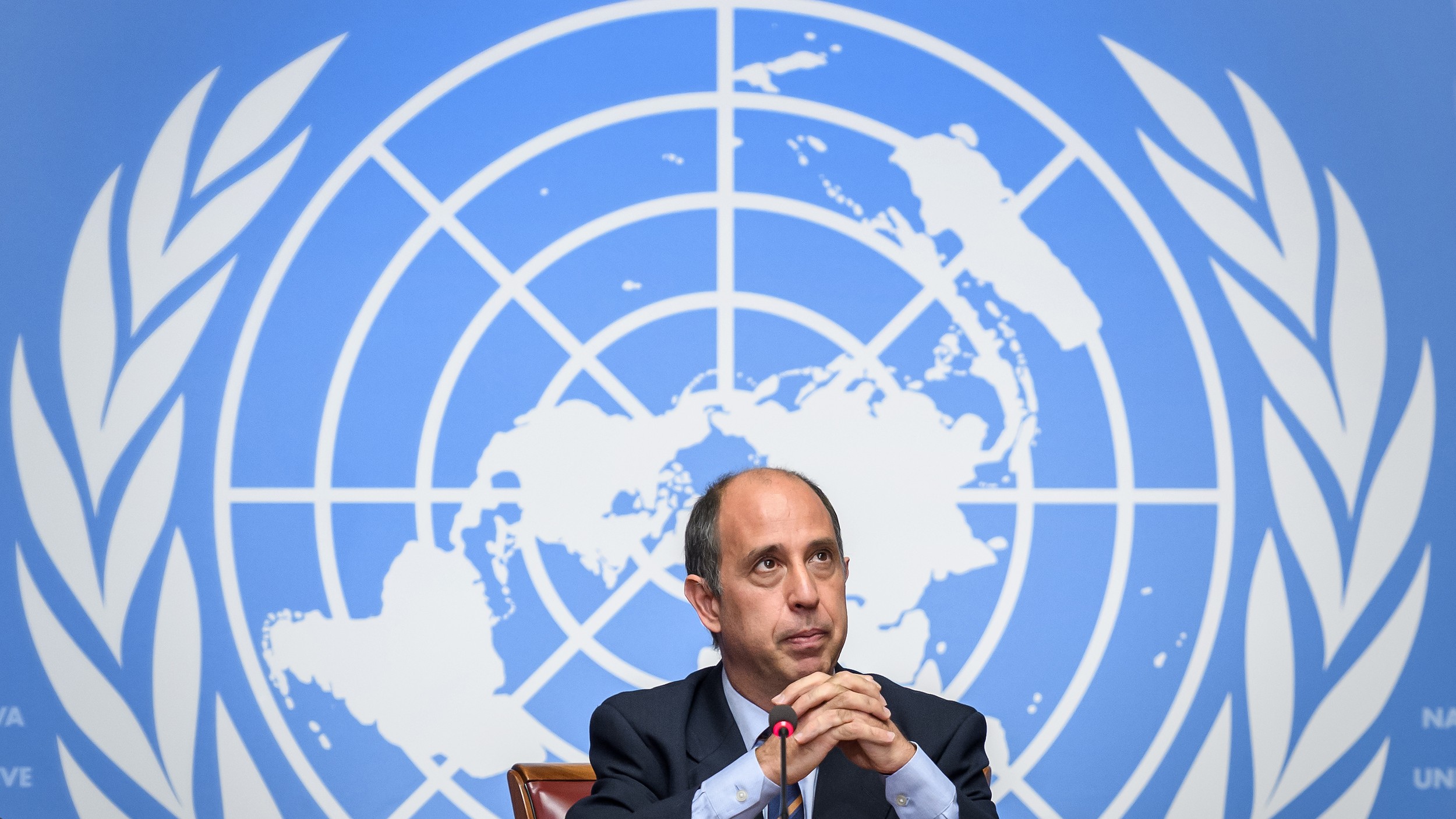 UN Special Rapporteur on the Situation of Human Rights in North Korea Tomas Ojea Quintana attends a press conference after delivering his report before the Human Rights Council in Geneva, March 9, 2020. AFP

Also on Thursday, Lee Rae-jin, the elder brother of the South Korean official who was killed while drifting in the Yellow Sea last month, held a press conference in front of the headquarters of the South Korean Coast Guard to disclose the content of a letter he received from South Korean President Moon Jae-in regarding his brother’s death.

Moon said in the letter that “when the truth is revealed, those who are responsible must be punished and honor must be restored” in the case of a wrong. He also asked Lee to “wait for the results of the investigation” into the incident by the Coast Guard.

The South Korean government earlier said the man was facing financial distress and was trying to defect to the North, based on an initial report last month by the Coast Guard, but his family has rejected the claim.

Lee urged the South Korean Coast Guard to conclude its investigation as soon as possible.

“You didn’t protect [my brother], you didn’t save him, and you failed to act in the moment.,” he said.

“And now, you shift the responsibility onto my brother and my family, just like you exchanged my brother’s life for death when it mattered.”

Lee told RFA’s Korean Service that he has yet to receive a response from the South Korean Ministry of Foreign Affairs regarding an interview with Foreign Minister Kang Kyung-wha, despite a statement by the ministry on Wednesday that it is “coordinating a meeting” between the two following Kang’s promise to speak with him during a parliamentary audit.

Last month’s shooting prompted a rare apology from North Korean Leader Kim Jong Un in a letter to South Korea’s President Moon, one day after Seoul gave an account of the incident that said North Korean soldiers had shot and killed the fisheries official, doused him with gasoline, and burned his corpse.

The incident was the first time a South Korean citizen was killed by North Korea’s military since 2008, when an elderly Southern tourist at the inter-Korean Mount Kumgang tourist region was shot and killed for straying into a military area. North Korea did not apologize for the killing.

Following that incident, Seoul suspended tours to the resort, which had been an important source of revenue for the North Korean government.