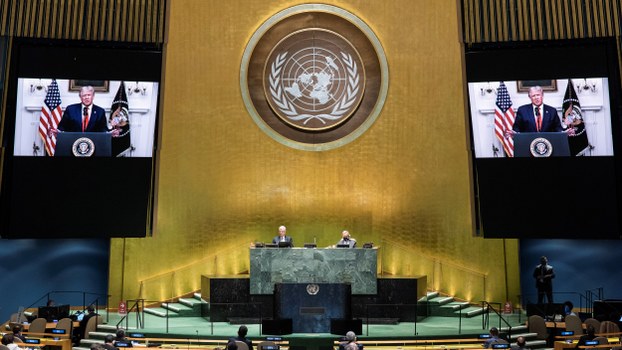 The tone of his speech was in marked contrast to that of Chinese President Xi Jinping who delivered a more measured statement that promoted multilateralism and, while not directly referring to the U.S., clearly took jabs at the Trump administration for isolationist and protectionist policies.

Speaking via prerecorded video to the general debate of the 75th Session of the Sept. 22-9 UNGA, with only a limited number of New York-based representatives of member states present at U.N. Headquarters due to the pandemic, Trump predicted that the U.S. will defeat the “China virus” and usher in a new era of “unprecedented prosperity, cooperation and peace.”

In order to do so, he said, addressing the session themed “The Future we want, the United Nations we need: reaffirming our collective commitment to multilateralism—confronting COVID-19 through effective multilateral action,” Trump urged other member states to “hold accountable the nation which unleashed this plague onto the world: China.”

He slammed China, where the coronavirus originated in December 2019 in central Hubei province’s Wuhan city, for initially locking down domestic travel while allowing flights to leave the country, while blasting Beijing and the World Health Organization—which he said is “virtually controlled by China”—for having “falsely declared” that there was no evidence of human-to-human transmission.

“Later, they falsely said people without symptoms would not spread the disease,” he said, adding that “the United Nations must hold China accountable for their actions.”

Trump also accused China of dumping plastic and trash into the oceans, overfishing in other countries’ waters, and emitting carbon at a level nearly twice that of the U.S.

Trump chastised the U.N. as ineffective, saying it had failed to “focus on the real problems of the world.”

Many of those he listed were issues that Washington has long criticized Beijing for, including religious persecution, forced labor, and what he termed “the ethnic cleansing of religious minorities,” in an apparent reference to rights abuses in the Xinjiang Uyghur Autonomous Region (XUAR), where authorities are believed to have held up to 1.8 million Uyghurs and other Muslim minorities in a vast network of internment camps since April 2017.

Military tensions between the U.S. and China have increased amidst Washington’s demand for freedom of navigation within the South China Sea—disputed waters that Beijing claims are nearly entirely within its territory.

Lastly, Trump railed against China for “decades of … trade abuses” that have led to a long-running trade war between Beijing and Washington. 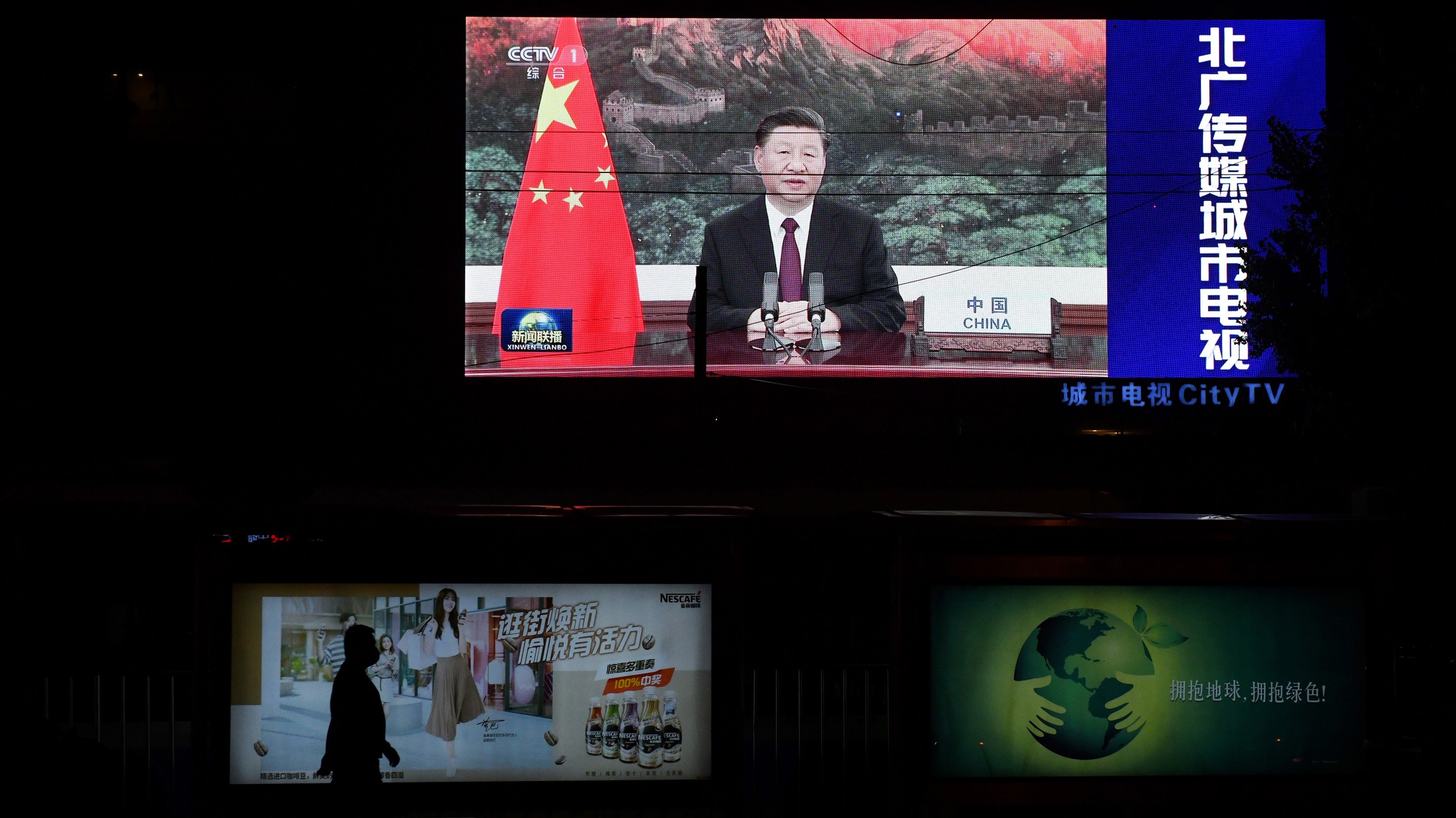 An image of Chinese President Xi Jinping appearing by video link at the United Nations 75th anniversary is seen on an outdoor screen as a pedestrian walks past below in Beijing, Sept. 22, 2020. AFP

Xi Jinping also began his address on the opening day of the UNGA with a pledge that the coronavirus “will be defeated,” but took the opportunity to applaud the concerted efforts of the global community, which he said are needed to combat it.

In remarks that appeared aimed at the U.S., Xi called on nations to “follow the guidance of science” and the lead of the WHO and insisted that “any attempt of politicizing the issue or stigmatization must be rejected.”

He said that the pandemic has shown more than ever that the world is a “global village” and that all countries are connected.

“No country can gain from others’ difficulties or maintain stability by taking advantage of others’ problems,” he said.

“We should reject attempts to build blocks to keep others out and oppose a zero-sum approach. We should see each other as members of the same big family, pursue win-win cooperation, and rise above ideological disputes and not fall into the trap of clash of civilizations.”

Xi also called for cooperation on initiatives that will enhance economic globalization to protect against the impact of challenges such as the coronavirus, rather than isolationist policies.

“Burying one’s head in the sand like an ostrich in the face of economic globalization and trying to fight it with Don Quixote’s lance is against the trend of history. Let this be clear, the world will never return to isolation and no one can sever the ties between countries,” he said.

In addition to calling for a worldwide “Green Revolution” to protect the environment using the Paris Climate Accord as guidance, Xi also urged reformation of the global governance system based on multilateralism under U.N.

“Major countries should act like major countries—they should provide more global public rules, take up their due responsibilities and live up to people’s expectations,” he said, in another apparent shot at Washington.

But he sought to downplay any fears that China would use its growing military might, economic power, or influence to impose its values on other nations.

“We will never seek hegemony, expansion, or sphere of influence—we have no intention to fight either a cold war or a hot one with any country,” he said, vowing that China will resolve its disputes through dialogue and negotiation.