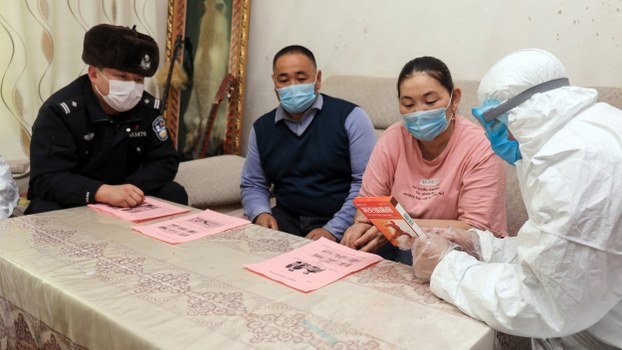 Authorities in northwest China’s Xinjiang Uyghur Autonomous Region (XUAR) have detected an outbreak of the coronavirus in Kashgar (in Chinese, Kashi) city, leading to a lockdown of the area and the mandatory testing of millions of residents of the Silk Road oasis city.

A 17-year-old girl from Kashgar prefecture’s Kona Sheher (Shufu) county, outside of the remote desert trading hub of 4.75 million people, was the first case to be detected during routine testing on Saturday, according to state media, which said the girl had an asymptomatic infection of COVID-19, the disease caused by the coronavirus.

The outbreak has been traced back to a textile factory in Kona Sheher’s No. 3 village where the girl’s parents worked, the Xinjiang health commission said at a press briefing on Sunday evening.

Officials quickly instituted a lockdown of the area, restricting flights in and out of the city and requiring mandatory tests of all residents. As of Monday evening, 4.5 million people had been tested and a total of 164 asymptomatic cases of COVID-19 identified.

In addition to travel restrictions, schools in the area have been told to close to avoid transmission, while residents have been ordered to remain in their neighborhoods to allow medical staff to carry out tests. Anyone who wants to leave the city is required to show proof that they have tested negative for the virus.

The XUAR has already come under heavy international scrutiny amid reports that authorities in the region have held up to 1.8 million Uyghurs and other Muslim minorities in a vast network of internment camps since early 2017.

During an earlier outbreak in the region in July, authorities implemented a strict two-month lockdown, threatening residents who broke curfew with detention in the camps, sources told RFA’s Uyghur Service at the time.

Rights groups and experts have expressed particular concern about the potential impact of an outbreak in the XUAR, where they say limited access to health care and cramped conditions in the internment camps could allow the virus to spread virtually unchecked.

As evidence of abuses in the XUAR continues to mount, Western governments have increasingly called out China for its policies in the region.

The move, which marked the first time Washington had sanctioned a member of China’s powerful Politburo, followed Trump’s enactment in June of the Uyghur Human Rights Policy Act of 2020 (UHRPA), which passed nearly unanimously through both houses of Congress at the end of May. The legislation highlights arbitrary incarceration, forced labor, and other abuses in the XUAR and provides for sanctions against the Chinese officials who enforce them.