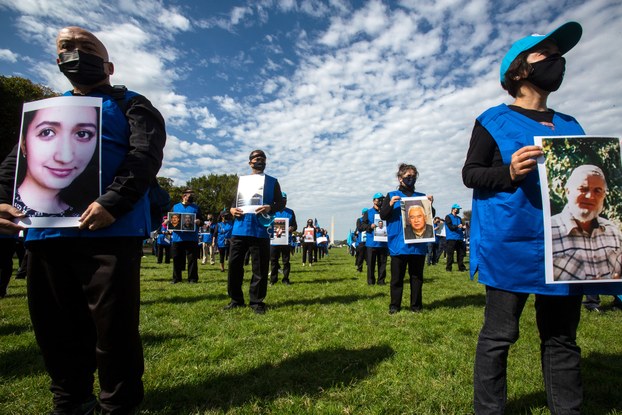 Uyghur protesters hold up pictures of their family members during "Resist CCP: Global Day of Action" in front of the Capitol Reflecting Pool in Washington D.C., Oct. 1, 2020.

A group of U.S. senators have introduced a resolution to designate China’s rights abuses against Uyghurs and other ethnic minorities in the Xinjiang Uyghur Autonomous Region (XUAR) as genocide.

The bipartisan resolution, introduced on Monday by Senators Robert Menendez, ranking member of the Senate Foreign Relations Committee, and John Cornyn, would hold China accountable under the 1948 United Nations Convention on the Prevention and Punishment of the Crime of Genocide and set in motion the process to coordinate an international response to end abuses in the region.

“There can be no question that the People’s Republic of China is committing genocide against the Uyghurs in Xinjiang,” Menendez said in a press release accompanying the resolution.

“Stopping a genocide is consistent with our national security and our values, and it starts by standing up and speaking the truth. I hope that President Trump and Secretary Pompeo will join us in calling this genocide by its name and responding to it with our partners in the international community.”

Cornyn called rights abuses in the XUAR, where authorities are believed to have held up to 1.8 million Uyghurs and other Muslim minorities in a vast network of internment camps since early 2017, part of “a despicable campaign of genocide” carried out by the state.

“This resolution recognizes these crimes for what they are and is the first step toward holding China accountable for their monstrous actions,” he said.

In addition to the campaign of extralegal incarceration, Risch noted that China’s government has rolled out measures that include forced sterilizations and abortions in the region, which he called “truly abhorrent.”

“These actions targeting Uyghurs and other Muslim minorities constitute genocide, and I am proud to join colleagues on both sides of the aisle in introducing a resolution that defines them as such,” he said.

“The United States and countries around the world must continue to draw attention to what is happening in Xinjiang.”

Rubio, cochair of the bipartisan and bicameral Congressional-Executive Commission on China (CECC), said it is time for the U.S. to make clear the nature of China’s “heinous crimes” and “atrocities” in the XUAR.

“It is for that reason that I’m proud to join my colleagues in introducing this bipartisan resolution declaring that the egregious human rights violations against Uyghurs and other Muslim minorities constitute genocide,” he said.

“Free nations must urgently come together and press for an end to these crimes and seek accountability and justice.”

Cardin said Congress can no longer turn a blind eye to China’s abuses, which he said, “demand a forceful U.S. response.”

Merkley highlighted reports of other abuses, including the use of torture in interrogations and the deployment of equipment that has turned the XUAR into a high-tech surveillance state, which he said constituted “genocide, pure and simple,” adding that the U.S. “can’t stand silent” on the issue any longer.

“There’s no question that what China has been conducting against the Uyghur population over the past three years constitutes genocide,” he said.

“The U.S. recognition of genocide will not only help its European allies to see it in the same light, it will also help mobilize the international community to put tremendous pressure on China to stop it.”

Isa called on U.S. Secretary of State Mike Pompeo to “follow the call of the U.S. Congress” and order the State Department to make a determination of whether the abuses constitute genocide “as soon as possible.”

Monday’s resolution came on the same day that Rubio, Merkley, Cornyn, and Cardin sent a letter to Pompeo urging the State Department to issue a formal determination on the situation in the XUAR.

The letter urged action citing a “heightened risk from persecution” for Uyghurs by the Chinese government.

At the end of July, the Trump administration leveled sanctions against the quasi-military Xinjiang Production and Construction Corp (XPCC) and two of its current and former officials over rights violations in the XUAR, as well as several top Chinese officials, including regional party secretary Chen Quanguo—marking the first time Washington targeted a member of China’s powerful Politburo.