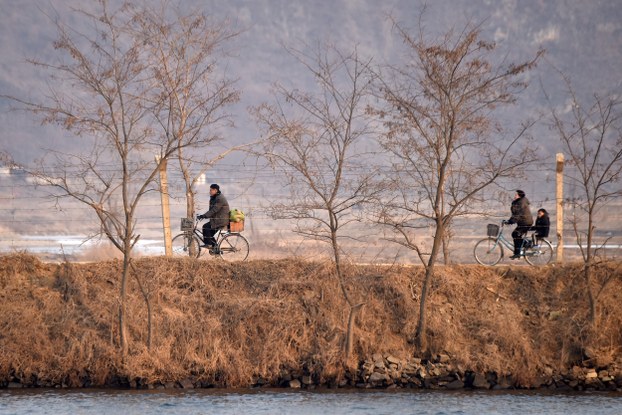 North Korean villagers ride bicycles on the waterfront, as seen from a boat on the Yalu river, opposite Hekou, in China's northeast Liaoning province on February 24, 2019.

Authorities in North Korea are urging citizens living near the border with China to report on neighbors who have had contact with people outside the country, in what sources said is an effort to blame South Korean spies for long-term border closures that have crippled the local economy and ruined livelihoods.

In areas of North Korea near the 880-mile Sino-Korean border, trading goods with China had been a major part of local economies, which have struggled since Pyongyang and Beijing completely shut down the border and suspended all trade in January to combat the coronavirus.

Rather than coming to the rescue of the citizens, the North Korean government has instead told residents to be self-reliant according to the country’s founding Juche ideology.

Meanwhile Pyongyang has stepped up surveillance and warned that it would shoot on site anyone found within one kilometer (0.6 miles) of the border.

North Korea claims that the kill zone and similar containment efforts have kept the country completely virus-free, but local sources say the deterrent has not stopped people from attempting to trade with contacts in China.

Even with the increased risk, many residents simply have no other means of survival. Now the authorities are telling the desperate citizens to turn each other in, then saying their economic misfortunes are Seoul’s fault, residents say.

A resident who declined to be named, from North Hamgyong province in the country’s northeast, told RFA’s Korean Service Monday that security agents announced the new reporting system at lectures hosted by neighborhood watch units in the border city of Hoeryong on Oct. 15.

“At the lecture, the speaker said South Korea’s Agency for National Security Planning [ANSP] is viciously maneuvering in the border area to spread the virus into our country,” said the source, using an outdated name for the South Korean spy agency currently known as the National Intelligence Service (NIS).

“The speaker also stressed that border area residents should fight against the enemy’s onslaught against our republic with our keen revolutionary alertness and take pride that we live in the border area,” the source said.

The source said that lecturers noted the worldwide coronavirus death toll, stressing that because of the wise quarantine policies of leader Kim Jong Un, North Korea still has not had even a single positive case of coronavirus.

“They said South Korea, which has many coronavirus patients, is mobilizing the ANSP to send the virus our way by all kinds of ‘vicious methods,’” said the source.

“Our enemies are disguising themselves as tourists and approaching residents in the Sino-Korean border area by throwing goods or money to our residents. The speaker stressed that we should not go to the border and raise our revolutionary awareness so as not to have contact with outsiders,” the source said.

But the source said he saw the lecture as an attempt to redirect grumbling residents’ anger about border closures that have affected their livelihoods.

“The lecture is to put the blame on the South, not on our Chinese brethren, isn’t it?”

Another source, a resident of neighboring Ryanggang Province, told RFA that similar lectures were held in the provincial capital Hyesan, another city on the Chinese border.

“The lecture said that the puppet government in South Korea is trying to spread the virus to us in the border area,” said the second source.

Much like in the lectures in Hoeryong, the Hyesan lectures stressed residents’ “revolutionary alertness” to detect and report the conspiracy of enemies operating in the border area and prevent their plans, according to the second source.

“Residents of the border area who used to make a living by smuggling are suffering greatly from the long-term border closure caused by the coronavirus. So it seems like these lectures are trying to say outside forces are responsible for the residents struggling to make ends meet.”

The state-run Rodong Sinmun newspaper published an editorial Oct. 17 that justified the continued border closure, telling citizens that the current situation is a golden opportunity to maximize the country’s internal strength and solidify its self-reliance.