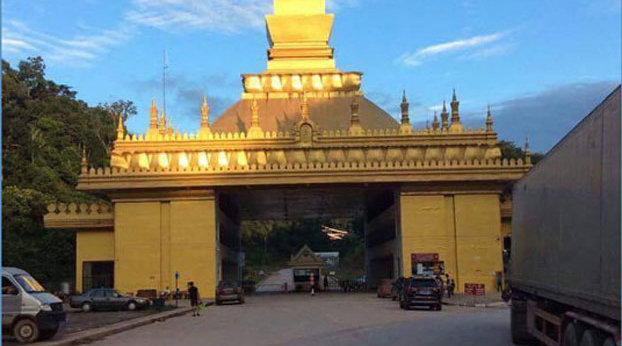 The Boten border crossing in Luang Namtha province in Laos is shown in a 2017 photo.
RFA

Laos is set to fast-track entry for travelers from China beginning Sunday, relaxing controls on a northern border crossing previously tightly shut to prevent the spread of COVID-19, under relaxed quarantine policies that worry some ordinary Laos, sources in the country told RFA.

Under a recent agreement between the two countries, Chinese nationals from COVID-free provinces will now be permitted to enter Laos by the Boten border gate if they have tested negative for COVID-19 and been quarantined for 14 days in China, an official of the Department of Civil Aviation in Laos told RFA this week.

“They will also have to be quarantined for 48 hours in Laos after crossing the border,” the official said, speaking on condition of anonymity because he was unauthorized to talk to media.

Laos, with ambitions to become the “Battery of Southeast Asia,” has drawn billions of dollars in Chinese investment in hydropower dams and other big-ticket projects under Beijing’s $1.3 trillion Belt and Road Initiative to build infrastructure and support trade.

China is Laos’ largest foreign investor and aid provider, and its second-largest trade partner after Thailand.

The border opening is only for Chinese traveling to Laos, however.

At present, Lao nationals are not allowed to leave the country, except for workers, students, and Lao residents with family members living in other countries, an immigration officer from the Ministry of Public Security said.

And even these will have to submit an application with the embassy of the country to which they wish to travel, with the application approved by Lao authorities as well, the officer said.

An official from the Ministry of Public Works and Transport meanwhile added that Chinese travelers to Laos had actually been allowed entry into Laos “for some time already.”

“Officially, the border will open on Nov. 1, however,” the official said.

This fast track or Green Lane will then open a week later for Vietnamese travelers, with other foreign nationals allowed entry on a week-to-week basis after that, he said.

Many in Laos voiced concern over what they called the short period of quarantine required of Chinese entering the country, with one resident in the capital Vientiane calling the two-day period of observation in Laos “risky, and too short.”

“The newcomers should be monitored for a longer period of time,” he said.

“COVID-19 is very dangerous, and it spreads quickly,” another Vientiane resident said, adding, “I don’t agree with the 48-hour quarantine. It should be at least 14 days.”

“I want the Chinese to be subject to the same rules as before. Allowing them to come in too easily is only going to make us worried,” a third resident in the capital said.

Four smaller Lao border crossings, including one on the border with China and three on the border with Thailand, will also open on Nov. 1, but will be used only for the cross-border transport of goods, with people forbidden to cross, Lao officials said.

“This will be used to build the Nam Theun 1 Dam, and the fourth border gate in Khammouane province will be opened for the export of minerals,” the official said.

Also speaking to RFA, many in Laos called however for all border check points to be opened, citing economic hardships caused by tightened controls amid fears of the spread of COVID-19 from neighboring countries.

“My children used to go to Thailand to work, but now they can’t, so they don’t have any income. At the same time, foreigners can’t come in now either,” one resident of Khammouane province said.

“I can’t reopen my restaurant now, because there are now tourists,” a restaurant owner in Borikhamxay province said, adding, “The prime minister’s order allows only for the import and export of goods.”