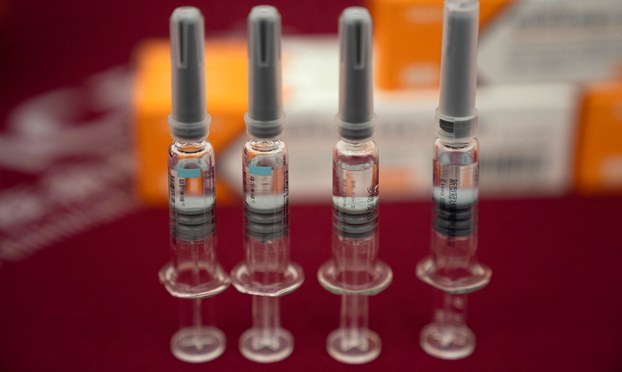 Syringes developed by Beijing's Kexing Biological Products are exhibited during a media interview at the company's factory, Sept. 24, 2020.
AP

Authorities in the eastern Chinese city of Qingdao have ordered coronavirus testing for all of the city's nine million residents after a fresh cluster of confirmed COVID-19 cases following the National Day Golden Week holidays.

By Monday, the city had reported at least six confirmed and six asymptomatic cases of COVID-19, prompting the local authorities to launch a five-day testing program amid growing public anger over the easing of restrictions for the Golden Week holiday earlier this month, when some 637 million Chinese people took to planes, trains, and highways to enjoy post-lockdown vacations.

A Qingdao resident surnamed Huang said one of the asymptomatic cases was only discovered because the man -- a taxi driver in his 50s -- went to the hospital with a suspected stroke.

"This taxi driver would often go to a ribs and rice restaurant on Jiangxi Road for lunch," Huang said. "That restaurant is now closed up -- probably for inspection."

"They are also testing a lot of people he had been in contact with," Huang said.

Qingdao Chest Hospital is now locked down, as well as the emergency department of the Qingdao Central Hospital, and buildings housing known cases are under quarantine.

Qingdao hosted some 4.47 million tourists during Golden Week, an eight-day holiday starting with China's Oct. 1 National Day, with media reports suggesting that the majority were from elsewhere in the eastern province of Shandong, including Jinan, the provincial capital, and Yantai.

"The Golden Week holiday was a big test of China's handling of the pandemic, and it may have given rise to silent transmission of coronavirus," Huang said.

'Too many people on the move'

A Jinan resident surnamed Jin said the authorities had allowed too many mass gatherings during the vacation period.

"They had too many people on the move during the eight-day holiday," Jin said. "It's so easy for the virus to spread if people are driving all over, visiting friends and relatives."

"[Doing city-wide testing] after the fact is like trying to patch up the lack of coronavirus safety measures," she said.

The renewed outbreak in China comes as Beijing, which has at least four coronavirus vaccine candidates in the last stage of clinical trials, said it would join COVAX, an international initiative to distribute COVID-19 vaccines to countries worldwide.

"We are taking this concrete step to ensure equitable distribution of vaccines, especially to developing countries, and hope more capable countries will also join and support COVAX," ministry spokeswoman Hua Chunying said in a statement.

China would buy vaccines for about 1 percent of its population through COVAX, Hua said.

Under the scheme, countries can choose to buy vaccines to cover up to 50 percent of their population, but many developed countries are using COVAX as a type of insurance policy in addition to bilateral arrangements with vaccine producers.

According to Yen Chen-sheng, a research fellow at the Institute of International Relations at National Chengchi University, China is hoping to step into a geopolitical power vacuum left by the refusal of U.S. President Donald Trump to sign up to COVAX.

He said the move could pave the way for a new round of vaccine diplomacy.

"Some of the pharmaceutical companies developing vaccines in the U.S. or Europe are private, and they have to make the money they spent on research and development back again," Yen said, adding that China will be able to spend public money on research and development, then offer the products to developing countries in return for their political support in international organizations.

"China is in a different position, because pharmaceutical companies are controlled by the government," Yen said. "It could get more difficult to pass motions against China at the U.N., because [Beijing] will use developing countries to shore up support."