China Changes Virus Testing Rules, Leaving Its Nationals Out in The Cold 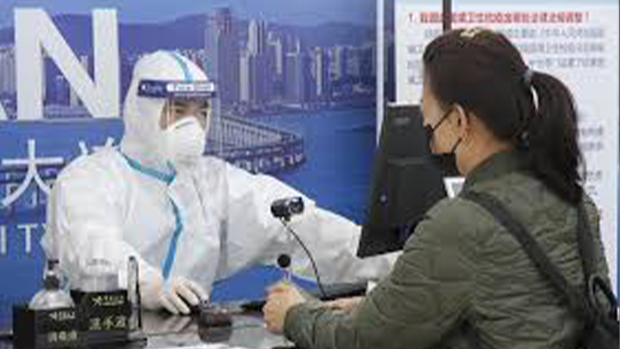 A traveler is met at the airport by a Chinese customs officer in an undated photo.
Official Photo

A sudden change to COVID-19 travel requirements for people arriving in China has left large numbers of the country’s own nationals stranded internationally, or forced to cancel travel plans at the last minute, RFA has learned.

China updated its requirements for incoming travelers on Oct. 30, giving travelers scant notice that they will now be required to produce satisfactory results to two separate COVID-19 tests before being allowed to board flights to the country.

The tests -- one nucleic acid test that detects the presence of the coronavirus that causes COVID-19 and one that detects antibodies to the virus -- must have been taken within 48 hours of boarding, according to a copy of the new rules published by the Chinese embassy in Brussels.

Many passengers who took their flights before the rules changed found themselves denied boarding during transit, as the new rules also required additional COVID-19 tests to be taken in the transit airport for passengers en route to China.

Some airports were unable to offer on-site COVID-19 tests, leaving passengers at risk of being denied boarding and repatriated to their port of origin, the embassy notice warned.

“Failure to obtain the green health code with the "HS" mark or a certified health declaration form with negative nucleic acid and IgM antibody tests results means you do not qualify for boarding the flight to China and will have to change your itinerary,” the notice said.

“In the event of …  not meeting the ... requirements, the passenger would face difficulties boarding the connecting flight and this would result in being stranded,” it said.

The sudden rule change left large numbers of Chinese nationals stranded, or forced to cancel travel plans, as rising ticket prices showed many are very keen to get back to the country.

A Chinese national surnamed Zhang who was unable to use three Korean Air tickets routed via Seoul owing to the new testing requirements.

“This isn’t Korean Air’s fault,” said Zhang, who was only able to obtain partial refunds on tickets worth more than U.S.$4,000.

“One issue is that we wouldn’t be able to leave the airport, and the other is that our transit time was too short -- it’s just not possible to get a double COVID-19 test in three and a half hours,” she said.

Zhang said there is simply no other option available to her family.

“There just aren’t any flights to China on any airline right now,” she said. “Air China have already said there are no economy seats left … there has been a price-bidding war caused by people who have no choice but to go back, like elderly people who came to visit family overseas.”

Most people’s plans are being upended by the requirement that fresh testing be done at transit locations, where tests are unlikely to be achievable in the time frame required by the new rules.

An employee who answered the consular protection hotline run by the foreign ministry in Beijing confirmed that the new rules would likely have an adverse effect on transit passengers.

Hotline staff would reflect passengers’ concerns to the relevant authorities, but wouldn’t take steps to offer assistance to stranded passengers, the employee said.

“It is true that this has made transiting somewhat difficult now,” the employee said. “Some airports don’t have facilities to carry out these tests, so people will need to take another route if there is no way to carry out the next required test.”

Meanwhile, a resident of the central Chinese city of Wuhan became the latest to sue the municipal government for medical damage and expenses incurred by the lockdown, which began on Feb. 10, 2020.

Yao Qing told RFA in a recent interview that she had filed an administrative lawsuit with the Wuhan Intermediate People’s Court on Oct. 22, suing the city authorities.

Yao said she was repeatedly prevented by the neighborhood committee from leaving her residential compound to seek medical attention for an injury.

“I called the [local] epidemic prevention command center at the time, and the reply to me at that time was that there was no car to take me, and no hospital to carry out the physiotherapy,” Yao said.

“Now, it’s going to be very difficult to recover from the hand injury, because I wasn’t able to receive physiotherapy at that time,” Yao said. “I no longer have a job, and my life is very hard.”

Fellow Wuhan resident Zhang Hai, who sued the city over the death of his father in the pandemic, arguing that they covered up the extent of infections and endangered citizens in doing so.

Zhang Hai submitted a freedom of information request to the Hubei provincial authorities and to Wuhan city hall on Oct. 19, requesting the names and positions of officials who “concealed, misreported, confirmed, or suspected cases and deaths" during the early stages of the pandemic.

His application was rejected on Oct. 30, he told RFA.

According to the official letter: “The matter applied for does not fall within the scope of the Regulations on the Disclosure of Government Information of the People's Republic of China."

No rule of law

U.S.-based legal scholar Teng Biao said the underlying problem was the lack of rule of law under the ruling Chinese Communist Party (CCP).

"China’s practices are not strictly in accordance with the law, so the measures taken by the Chinese government are very extreme,” Teng said.

“Many countries have locked down cities, but at least they ensure that the daily needs of citizens are met, and do so without causing serious violations of citizens’ personal freedom, like they do in China,” he said.

Yao said she isn’t optimistic about the outcome of her case, either.

"I read that all the other Wuhan residents who have tried suing the government up until now have been rejected,” she said. “I think my case will receive the exact same treatment.”

Reported by Wong Siu-san and Sing Man for RFA’s Cantonese Service, and by Xiao Yibing for the Mandarin Service. Translated and edited by Luisetta Mudie.