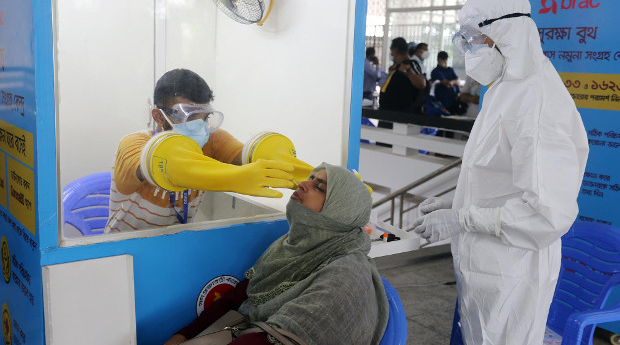 Chinese biotech company Sinovac wants to withdraw from a planned third-phase trial of its coronavirus vaccine in Bangladesh after Dhaka rejected the firm’s request to co-fund the trial, Health Minister Zahid Maleque told BenarNews on Friday.

Last month, Bangladesh’s government notified Sinovac that it would not agree to co-fund a phase-three trial – which would be the first held in the country for a COVID-19 vaccine – because that was not part of a deal agreed to in July, Maleque said.

None of the countries that have allowed vaccine trials are paying companies for them, he added.

“We called the officials of the ICDDR and asked them whether Sinovac wants to conduct the trial. The ICDDR officials informed us that Sinovac wants to withdraw,” Maleque told BenarNews, referring to Sinovac’s local partner, the International Center for Diarrheal Diseases.

“Possibly, they want to leave since we are unable to pay them the money they asked for the trial.”

A spokesman for the ICDDR declined to comment on the minister’s statement. BenarNews contacted officials at Sinovac and the Chinese embassy in Dhaka for comment, but they did not respond.

On Friday, Bangladesh reported 1,767 new cases of coronavirus infections and 19 deaths in the previous 24 hours, according to the health services directorate. The South Asian country has confirmed a total of 428,965 coronavirus cases and 6,159 COVID-19-related deaths since early March.

The world is anxiously awaiting a vaccine. Sinovac’s CoronaVac is one of 11 potential COVID-19 vaccines being produced by some of the world’s premier pharmaceutical companies that are in Phase 3 trials, The New York Times reported this week.

Last week, Bangladesh signed a deal with the Serum Institute of India to buy 30 million doses of a COVID-19 vaccine being developed by the multinational drug maker AstraZeneca. Under this deal, the plan is to vaccinate 15 million Bangladeshis, with two doses each.

Nevertheless, Sinovac’s probable exit is worrying, Dr. Mustaque Hossain, a former director of the Institute of Epidemiology, Disease Control and Research – an organization under the health ministry – told BenarNews.

“Sinovac’s withdrawal is not a good development. Now, we have to find other companies for the coronavirus vaccine,” Hossain said.

Minister Maleque said last week that Sinovac had asked for Bangladesh to co-finance the coronavirus vaccine trial, saying it was facing a funds crunch.

“We told them that Sinovac can withdraw if they desire. If they want to conduct the trial, they must bear the expenses. We cannot provide it funds for trial,” Maleque told BenarNews on Friday.

“No country in the world has paid money to a company for a vaccine trial. Sinovac should thank us as we offered our people for the trial,” he said.

Co-funding was not mentioned when Sinovac earlier sought permission to conduct the trial in Bangladesh, he said.

According to Sinovac’s agreement with Bangladesh in July, as many as 4,200 volunteers would participate in the trial, half of whom would be vaccinated.

Under the deal, Sinovac was also supposed to give Bangladesh 110,000 free vaccines along with the vaccine technology so local pharmaceutical companies could produce it, Maleque told Reuters last week.

After Dhaka’s approval, Indonesia in August announced that it had approved a late-stage trial of a vaccine that Sinovac is developing with Indonesian state-owned peer Bio Farma.

A similar trial by Sinovac in Brazil was briefly halted this week after a “serious adverse event” occurred, but this was ultimately deemed unrelated to the vaccine trial, reports said.

Hossain, meanwhile, said it wasn’t right that Sinovac had asked Bangladesh for funding.

“According to our local law and the international law, the company must bear the expenses for trial of vaccines. The company cannot ask for money from the host government. Sinovac should not have asked for money from Bangladesh government,” he told BenarNews.

“Sinovac has been conducting third phase trials of the coronavirus vaccine in Brazil and Indonesia. But to the best of my knowledge, no country is providing them with funds for the trials.”